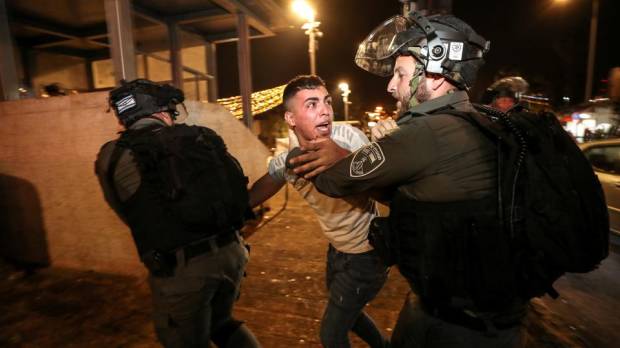 JERUSALEM – Police Israel detained 1,700 Arabs in Israel over the past two weeks, the Anadolu Agency reported.

In addition, there have been 300 attacks by Israeli authorities against Arabs and their property.

According to the Arab Emergency Committee affiliated with the Higher Committee for Arab Citizens in Israel, this detention and aggression comes amid an Israeli crackdown on Arab protests against Israeli aggression on Al-Aqsa Mosque and in solidarity with Gaza.

Read also: Iran Quds Force boss: Israelis Must ‘Return’ to US and Europe

The Arab Emergency Committee confirmed they were documenting Israeli aggression and the detention of Arab citizens in Israel.

Read also: During the bloody war, 43 Gazans were suspected of being Israeli spies

The committee also documented more than 150 attacks on individuals carried out by Israeli police or gangs of Jewish settlers.

On April 13, Palestinians began their protest against Israel’s brutal attacks on Palestinian worshipers at Al-Aqsa Mosque, as well as Israel’s plans to expel Palestinian families in Sheikh Jarrah.

Israel carried out brutal attacks in Gaza to prevent this reaction, killing about 290 people, including 69 children, 40 women, 17 elderly people, and injuring about 9,000 others, including 90 in critical condition.

So far no international sanctions have been applied to Israel. The United States has become Israel’s main protector from worldwide condemnation.