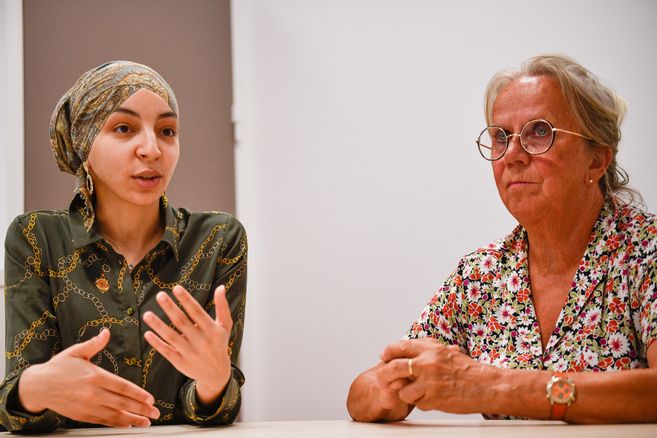 How to get the pediatrics department of the Montluçon-Néris-les-Bains hospital center (Allier) out of the impasse towards which everything seems to be directing it at the end of the year? It is this question that the collective “Orphans of the care of Montluçon” decided to bring openly to the public square, created this Wednesday, June 22.

Already 400 strong, it was created on the initiative of Pierrette Guichon, the president of the Public Hospital Defense Committee, and Dr. Hiba Trraf, the head of the department. “The idea is to widely mobilize the population to finally get things moving, because we passed the warning bar a long time ago,” explains Pierrette Guichon.

Why are the caregivers of the mother/child center of the Montluçon hospital center (Allier) on strike?

The tense situation in pediatrics due to a lack of doctors goes back more than a year. In April 2021, the service went on strike to denounce degraded working conditions. It was then working with three pediatricians out of a theoretical staff of seven.

This figure fell to two in January with the departure on availability of a practitioner, before rising to 2.8 full-time equivalents in April, after the arrival of reinforcements.

… And two departures in September and end of October

Nothing very encouraging, therefore, and the prospects are even less so since the two full-time pediatricians have resigned and will leave the service on September 19 for one and on October 31 for Dr. Hiba Trraf, who wishes to oriented towards humanitarianism.

“I’m the only registered pediatrician,” she says. The other 1.8 are PAA (associate attached practitioners), in other words foreign pediatricians that I have to supervise. So, if things stay as they are, I’m absolutely not sure that the pediatric ward will survive from November or else by largely closing. And it is not because we are going to reduce the activity that the children will no longer need to be hospitalized. »

We have to find solutions for the Montluçonnais, but not only because we have patients who come from Cher, Creuse, Indre…

This observation, Hiba Trraf draws it with death in the soul. In post in Montluçon since November 2018, the young 31-year-old doctor says she has postponed the deadline for a departure as long as possible in recent months.

“I wanted to leave in April, but I couldn’t because, even though I’m not from here, I got attached to the patients and it’s hard to leave them without an alternative. I’ve done a huge job of getting rid of the guilt, but I know I can’t get through another winter like the one we’ve had. »

The pediatrician explains that this period “always more complicated due to epidemics” was “a click”.

“To give an idea, this winter, it was 80 hours a week, and it could go up to 120 hours, with always the possibility of being called at any time… These are not conditions that I allow me to flourish or treat my patients correctly. »

“The Snake Biting Its Tail”

A finding not really likely to encourage potential pediatricians to come and take over. “When I arrived, there were seven paediatricians. Then, there were successive departures: a retirement, someone who wanted to move, then exhaustion and after that collapses. From the moment we fell below the critical threshold of five paediatricians, we were no longer attractive because we were working too much. Suddenly, the pediatricians do not want to come, even if good salaries are offered. It is the serpent biting its own tail. »

Lack of doctors: the pediatric department of the Montluçon hospital center (Allier) under tension

Leaflets to fill out and send to Emmanuel Macron

It is to avoid this worst-case scenario that “Les Orléans du Soins” has just been created, and that they will meet the population in the markets of Montluçon today and tomorrow, to distribute leaflets to be sent to the President of the Republic.

“The idea is to raise awareness. Not to scare them away, but to inform them transparently”

And to continue: “I alerted the ARS, the prefect, the deputy, the public prosecutor, the Prime Minister, the President of the Republic. We made a joint letter with the mayor without having effective answers. So yes pediatricians from the CHU came to help us, but concretely from May to November they come sixteen times 24 hours over six months. It is insufficient. »

“The answer can only be political. So there, we try to put pressure differently by asking users to fight for their rights quite simply. With the hope of having a little more weight if there are many of us. »