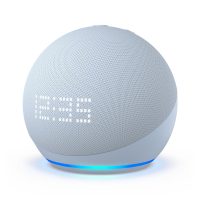 (excerpt from the press release)

LUXEMBOURG – September 28, 2022 – Amazon today introduced the next generation of Echo Dot and Echo Dot with clock. These offer customers even more ways to enjoy the convenience of Alexa in every room of their home. Amazon has also announced audio improvements for Echo Studio and new features that make Alexa and Echo devices even more useful and fun.

“Ambient Intelligence simplifies everyday life whenever customers need it. Otherwise she takes a back seat. That was the guiding principle when developing the new Echo devices,” says Eric Saarnio, VP Amazon Devices International. “They offer improved sound with the same compact design and can be seamlessly integrated into everyday life. In addition, new sensors and other technical improvements in the Echo Dot and Echo Dot with clock expand the ways in which Alexa, instructed by customers, can provide support independently.”

The Echo Dot and Echo Dot with Clock feature new sensors that enable more contextual Alexa experiences. For example, customers can set up a routine so that Alexa automatically turns off the smart fan when a certain temperature has been reached in a room. The new models also have an acceleration sensor. For example, customers can simply tap the top of the device to pause or start music playback, turn off the alarm, or end a call. The Echo Dot and Echo Dot Clock are powered by the AZ2 Neural Edge processor. This allows more interactions to be processed directly on the device – enabling even faster responses to some of the most common requests to Alexa, as well as immediate responses to tap gestures.

The new Echo Dot with Clock has an improved 5×21 LED display that gives customers even more information with a quick glance. In addition to the time, you can display song titles, artist names, the weather or a mathematical equation, for example.

Echo Studio – now with improved audio technology
Echo Studio already offers the best sound of any Echo speaker. It is now also available in white – and thanks to a new technology for spatial audio processing and the extension of the frequency range, existing devices become even better.

Proprietary spatial audio processing technology is specifically designed for better stereo sound. They give music and film sound an immersive breadth, clarity and presence that the respective artists had in mind during production. As with a hi-fi stereo system, vocals are more present in the center and instruments spread out in the stereo field are better defined at the edges. The extension of the frequency range ensures that mids are reproduced more clearly and the bass goes deeper. These upgrades complement the Dolby Atmos and Sony 360 Reality Audio audio formats that Echo Studio already supports.
​​​​​​
New features for smart home and entertainment
In the coming months, Amazon is also rolling out two new features that will make Alexa and Echo devices even more useful and fun.

“Alexa, turn off the lights in 10 minutes.”
Customers can now ask Alexa to turn connected smart home devices on or off at a specific time or after a specific duration, up to 24 hours in the future. For example, you can say “Alexa, turn off the lights in 10 minutes” or “Alexa, turn on the coffee maker at 7 am”. This makes it easier to manage the big and small tasks of everyday life and to control the devices according to your own daily routine.

Fire TV available for Echo Show 15
Many customers are already using Echo Show 15 as a smart kitchen TV. With a free update, they will soon also be able to access Fire TV content and find and watch thousands of films and series episodes from services such as Prime Video, Netflix, Disney+ or ZDF Mediathek. For example, customers say “Alexa, play The Rings of Power” to start the series.

With the new Fire TV widget, customers can also quickly access recently viewed streaming apps, recently viewed content, or their personal watch list. To explore content on Fire TV, they either tap the screen, use the specially designed virtual remote control, or pair their Echo Show 15 with the Alexa Voice Remote for Fire TV (3rd gen).

Data protection and security measures on several levels
Echo devices protect customer data at multiple levels. Each device has a microphone off button and the ability to view and delete all voice recordings. Customers can find more information about the numerous functions that offer transparency and control over their Alexa experience in the Alexa data protection portal: ​​​​​​www.amazon.de/alexadatenschutz

Climate Pledge Friendly
The newly announced Echo Dot devices are Climate Pledge Friendly and Carbon Trust certified. 95% of the fabrics are made from recycled consumer waste. 99% of the packaging for these devices is made from wood fiber materials obtained from responsibly managed forests or recycled sources. Echo Dot devices also have a power saving mode to intelligently save energy during periods of inactivity and for the life of the device (depending on usage patterns).