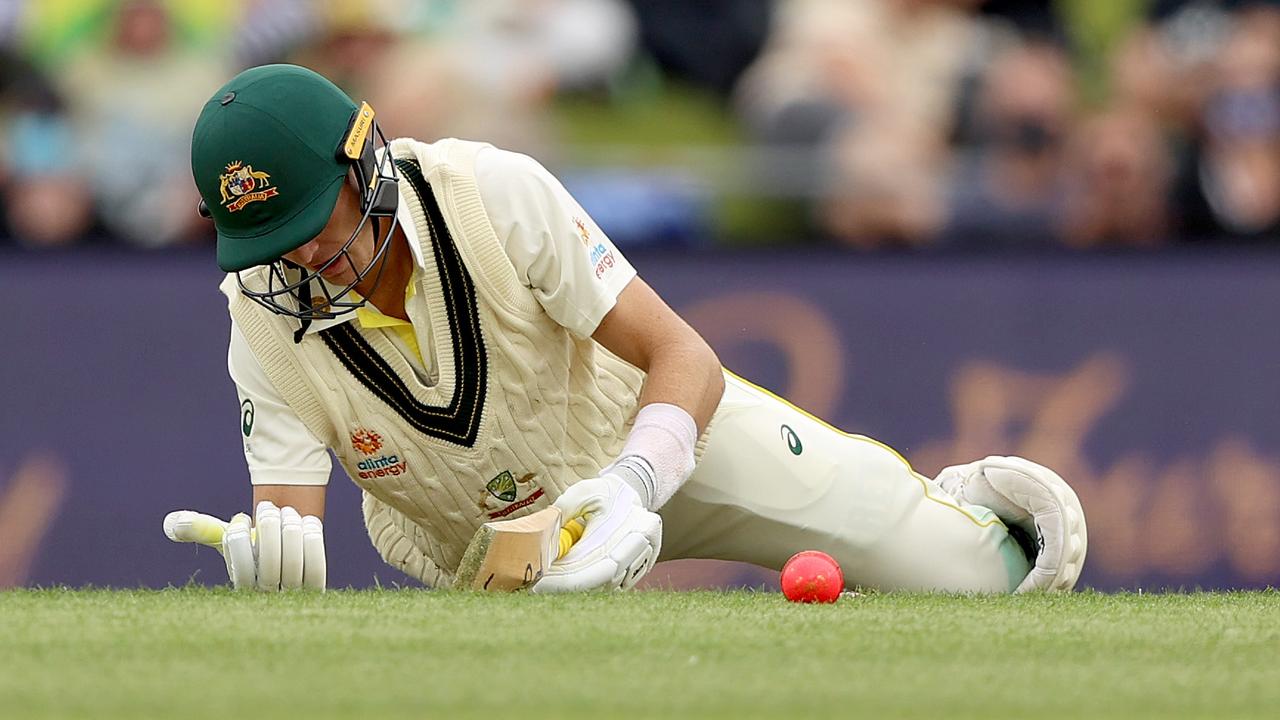 Marnus Labuschagne saw the funny side of his hideous Ashes dismissal, but the mishap was at least partly due to some technique tinkering.

“Yeah just got a good one.”

Australian cricketer Marnus Labuschagne saw the funny side of his hideous first-innings dismissal in Hobart, posting an image of the mishap to Twitter on Friday evening.

Facing England paceman Stuart Broad on day one of the historic day-night Ashes Test at Blundstone Arena, the Queenslander looked to waltz across the crease and flick the seamer through mid-wicket.

But when Labuschagne’s front foot pointed towards cover, his spikes didn’t plant into the pitch, and his left shoe slid viciously across the deck.

Catch every moment of The Women’s Ashes live and ad-break free during play on Kayo. New to Kayo? Try 14-days free now.

It left the Australian No. 3 in an awful tangle – he collapsed onto the turf and Broad’s delivery crashed into middle stump.

Former English captain Michael Atherton laughed on SEN: “I’ve never seen anything like it. It was the most comical thing. It was hilarious. Rory Burns now doesn’t have the most comical dismissal of the series. I just don’t know what he was doing.”

Labuschagne made his way back to the pavilion for 44, with the Australians in a spot of bother at 4/83 on day one of the fifth Test.

Inevitably, social media was flooded with memes after Labuschagne’s dismissal, but Triple M video producer Ethan Meldrum deserves a shout-out for his Shooting Stars video, which made me audibly cackle on the train.

Labuschagne wasn’t the only cricketer to fall victim of Blundstone Arena’s moist deck on Friday – Broad and England speedster Mark Wood also slipped onto the turf in Hobart.

It’s easy to blame the pitch for Labuschagne’s blunder, but the mishap was at least partly due to the batting phenom tinkering with his technique earlier in the Ashes series.

The 27-year-old was removed by Wood for 1 in the Boxing Day Test before the England quick knocked him over in both innings at the SCG for 28 and 29.

Labuschagne’s best performance of the Ashes series came during the pink-ball fixture in Adelaide when he scored 103 and 51 to claim Player of the Match honours – Wood was not selected for the day-night Test.

Wood’s battle with the Australian No. 3 became one of the most enthralling contests of the summer, and Labuschagne decided to make a minor adjustment to his stance specifically to counter the paceman’s threat.

“That’s what I did in that second innings, just trying to get myself in a position to change what line and what length Mark Wood’s bowling.

“That’s what the change of trigger and trying to get a little bit further across (was for). I won’t delve too much more of it now.

“Certainly after the Test, we can talk more about why I’m doing it but it’s certainly to negate that angle that he has coming from so wide of the crease.”

Needless to say, the ploy backfired dramatically in Hobart.

Wood himself noticed the change in Labuschagne’s stance, telling reporters last week: “His back foot was coming across more and opening himself about a little to counter-act … when I was trying to bowl wide on the crease.

“I got him again. I’m not sure if that’s going to work every time.”

Labuschagne finished the Ashes series as Australia’s second-highest run-scorer, with 335 runs at 41.87 with two fifties and a century.