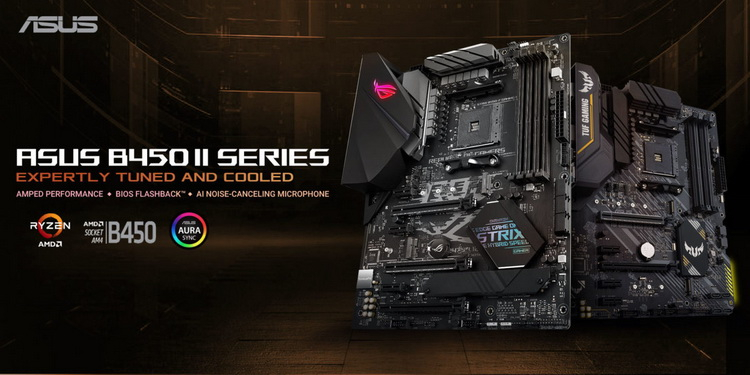 The main feature of the updated ROG Strix B450-F Gaming II board is the new processor power subsystem, built according to the 8 + 4 scheme. The manufacturer announced support for DDR4 RAM with a frequency of up to 4400 MHz and a volume of up to 128 GB, an additional slot for an NVMe drive, two 10-Gbit USB 3.2 Type-A connectors and one USB 3.2 Type-C.

The board does not have built-in support for Wi-Fi, but it can be organized by installing an additional Wi-Fi 6 module. For this, the appeared second PCIe M.2 slot is useful.

The full-size TUF Gaming B450-Plus II ATX board comes in the familiar black and yellow color scheme. The new revision of this model received an updated processor power subsystem, built according to the 8 + 2 scheme, as well as support for RAM with a frequency of up to 4400 MHz and a volume of up to 128 GB.

The manufacturer installed an additional M.2 connector for the NVMe drive on the board, and also supplemented the external connector scheme with one USB 3.2 Type-C port. In addition, the DisplayPort video output has appeared. It comes in handy for those on a budget and decides to opt for Ryzen APUs with integrated Vega graphics on board.

The TUF Gaming B450M-Pro II model is the younger sister of the above motherboard. It is made in Micro-ATX format. Despite this, the new revision of this motherboard offers installation of up to 128 GB of RAM with a frequency of up to 4400 MHz, DisplayPort connectors, USB 3.2 Type-C and Type-A, as well as one additional USB 3.2.

In addition to this, a second M.2 slot and an armored PCIe 3.0 x16 slot are announced.

The Prime B450M-A II board has also been redesigned. The processor socket has moved a little lower, closer to the center. The updated revision received support for 128 GB of DDR4 memory. The presence of an M.2 connector for NVMe-drive, as well as six SATA ports will allow you to organize a flexible storage subsystem.

A 10 Gbps USB 3.2 port appeared on the rear panel of the connectors. For output to the front panel, another, but less high-speed USB 3.2 is available. The board also received a new 32MB BIOS chip to support new processors. A system built around this fairly affordable board can also be pretty fancy. The new revision offers the presence of a connector for connecting an RGB tape, which can be controlled via the Aura Sync application. To organize additional cooling, there are three 4-pin connectors for case PWM fans.

The Prime B450M-K II board offers a budget build based on Ryzen processors. Two DDR4 RAM slots support up to 64GB of RAM up to 4400 MHz. The main PCIe graphics card slot is reinforced with a metal frame. The board also allows the installation of one M.2 NVMe drive and has four SATA connectors.

The new revision of the motherboard received HDMI output, support for BIOS FlashBack technology and 32 MB of internal memory for firmware, providing a wide range of supported processors. For the front panel, the manufacturer has provided a USB 3.2 connector. Despite the obvious budget of the model, it, like all the other boards in the list, supports the work with the proprietary Armory Crate software.

Unfortunately, the manufacturer does not report anything about the prices and the date of the second revision of the motherboards of the above series on sale.