Attacked by his rivals, Sanders poses as a bulwark against Trump 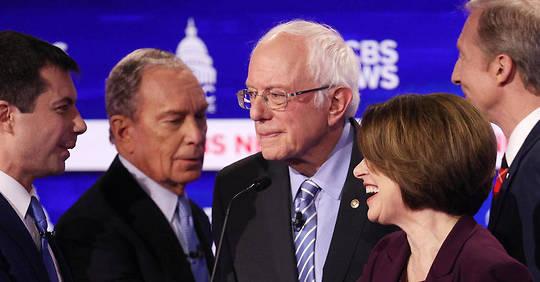 It was the 10the primary democratic debate. Organized in Charleston, South Carolina, a few days before a decisive poll to be held in that state, it highlighted the current balance of forces in the race. The favorite, Bernie Sanders, insisted that his far left program could lead him to a victory against Donald Trump in November.

The bitter exchanges between the candidates for the democratic nomination during this particularly animated debate were up to the stakes. Four days before a crucial vote by the Democratic primaries in South Carolina, many were playing their last chance to stay in the game. Because the result in South Carolina will decisively influence the momentum of the candidates just before “Super Tuesday”, when 14 states will vote on March 3.

Bernie Sanders, 78, has so far been the super-favorite of these primaries, after three votes in Iowa, New Hampshire and Nevada. His advance has brought to light the divide within the party, between supporters of the self-proclaimed “socialist” senator and supporters of a more central speech, supposed to be able to rally more voters to beat Donald Trump on November 3.

Its more moderate rivals claimed that the funding of its program, too radical in their eyes, remained too vague, in particular on its profound reform of the health system. It would, in their eyes, give ammunition to the outgoing Republican President if Bernie Sanders wore Democratic colors against him.

“I’ll tell you what the bill will be. The bill will be another four years for Donald Trump, “said Pete Buttigieg, former mayor of South Bend. In a very perilous situation after three bad results, the progressive senator Elizabeth Warren, 70 years old, also exhausted on this point Bernie Sanders, presenting herself as the best alternative on the left.

Read also Pete Buttigieg: the “Obamacron” of the primaries

The independent senator was again summoned to explain himself for having recently hailed the “massive literacy program” launched by Fidel Castro after the Cuban revolution in the 1950s. He defended himself by claiming that the former Democratic president Barack Obama had made similar comments, before hammering out that he wholeheartedly condemned all authoritarian regimes. Former Vice President Joe Biden also criticized Bernie Sanders for his past gun positions in controversial US Congress votes.

Faced with this barrage of attacks, Bernie Sanders insisted that polls gave him the winner against the Republican president. “The fact is that to beat Trump (…), we need a candidate (driven) by energy and passion,” he said, presenting himself as the only candidate capable of galvanizing young people and minorities while bringing back “the workers towards the democratic party”. And he insisted that his proposals were not “radical”. They “exist in countries around the world. Health is a human right ”.

Read also Gérard Araud – Trump, the man who had to be taken seriously

A moderator noted that if elected, Bernie Sanders would be the first Jewish president in the United States. “I am very proud to be Jewish,” he said in a rare allusion to his religion. “But I unfortunately think, tragically, that at the moment in Israel, with Bibi (Benjamin) Netanyahu, a reactionary racist is ruling this country”.

After a failed first appearance last week, the billionaire Michael Bloomberg faced on a firmer foot the attacks always fed by other contenders for the White House. He defended himself against accusations of sexism and policies deemed discriminatory when he was mayor of New York.

Third in the national polls, the former mayor of New York, 78, will enter the race during “Super Tuesday”, after having drawn more than $ 500 million in his personal fortune to finance his campaign. His television spots were also shown during the breaks of the debate. “It doesn’t matter how much money Michael Bloomberg has. The heart of the Democratic Party will never trust him, “said Elizabeth Warren of the former Republican.

Playing very big in South Carolina, Joe Biden, 77, wanted to be combative. The former right-hand man of Barack Obama puts almost everything on this State, after two pitiful scores in Iowa and New Hampshire. “I will win South Carolina,” he insisted. He raised his head in Nevada and now hopes that his popularity among blacks will lead him to a victory in South Carolina, where they represent more than half of the Democratic electorate. But his lead in this state has narrowed in recent weeks.

Pete Buttigieg, 38, is the first gay man to have a chance of winning the nomination after scoring well in the first two elections. He once again wanted to present himself as an alternative for the future in the face of a Bernie Sanders with “nostalgia for revolutionary policies in the 1960s”. But it lacks support among minorities, which leads it to polls in South Carolina.

I agree. No, we did it differently in coordination with the health department. With us, all employees have been wearing a face mask for...
Read more

Discussions with developersAccording to "Standard" there are currently discussions about a cooperation of the Red cross with the developers of Novid20, a non-profit association...
Read more

I agree. No, we did it differently in coordination with the health department. With us, all employees have been wearing a face mask for...
Read more

Discussions with developersAccording to "Standard" there are currently discussions about a cooperation of the Red cross with the developers of Novid20, a non-profit association...
Read more

veterinary laboratories made available for testing

Four Bundesliga clubs were on the verge of bankruptcy due to coronavirus: Football: Sports: Lenta.ru

Four clubs of the German Bundesliga were on the verge of bankruptcy due to the coronavirus pandemic. It is reported by Kicker.According to the...
Read more

I agree. No, we did it differently in coordination with the health department. With...
Read more

Discussions with developersAccording to "Standard" there are currently discussions about a cooperation of the...
Read more

Read more
Previous articleconciliation meeting this Wednesday in Vienna
Next articleIn France, a third of men do not wash their hands after using the toilet