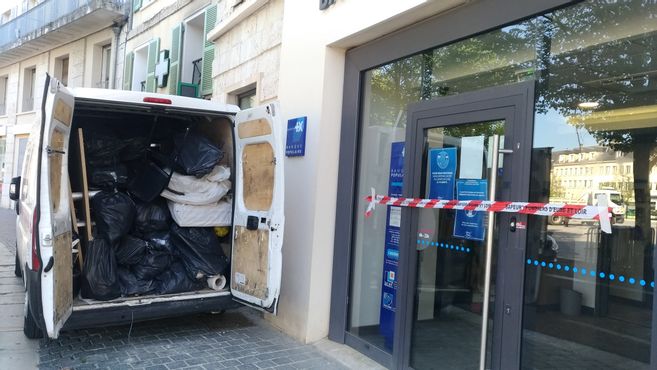 Men in white coveralls took over the Banque Populaire, place des Épars, in downtown Chartres, yesterday morning. These are professionals in the decontamination of premises following flood or fire.

This bank was impacted by the fire which broke out in the reserve of the Épars pharmacy on Monday, April 12.
Nearly eighty-three firefighters intervened to neutralize the flames and prevent a spread to the floors and to the two adjoining banks. While the LCL bank was not affected, the Banque Populaire was damaged and management was forced to close access to customers.

The company Phenix was selected to intervene and clean up the damaged parts, in particular by soot.
The specialists filled whole garbage bags, stored with a few chairs in a van filled with garbage at 10:30 a.m.
The technicians deposited several large cans, rags and cleaners in the lobby of the entrance of the bank. The duration of this rehabilitation project is not yet known.
On the pharmacy side, the work, which has not started, could be spread over a year.