Home » News » Carrier strike this Monday, June 27: why will it be done and what foods would stop entering Lima? | National strike | Food in Lima | NMRI EMCC | LIME 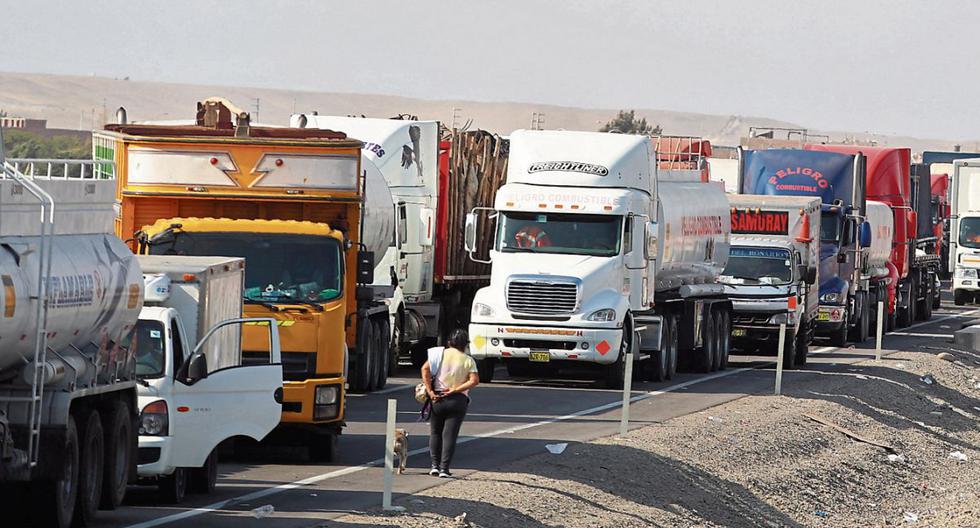 For this Monday, June 27, unions of heavy cargo carriers have called a indefinite national strike. This was announced by the president of the National Union of Heavy Cargo Carriers (UNT), Javier Marchese, with a worrying phrase: “No food will enter Lima on Monday”.

The leader even asked the housewives “that they forgive us because if our problems are solved, the problems of the basic family basket will be solved”.

Who will abide by the strike?

According to the leader Javier Marchese, the strike of carriers will take place at the national level and will be observed mainly by those who transport heavy loads. “We are waiting for the confirmation of the other provincial, regional guilds, all those who are supporting“, said.

Also Bruno Aberasturihead of the National Association of Land Freight Transportation (Anatec), said that his union will participate in this strike.

It is estimated that there will be 400 thousand trucks that would paralyze their operations in different regions of the country.

Two days ago the Minister of Transport and Communications, Juan Barranzuela Quirogawelcomed the fact that a transportation union has decided to suspend its participation in the strike scheduled for this Monday.

The minister met in Arequipa with the spokesperson for the Association of Transporters of Peru (Asotrape), Javier Corralesin an intermission of the Decentralized Council of Ministers, and it was agreed that said union postpone its paralysis until July 18.

Barranzuela also invited the rest of the unions that maintain the strike to a new meeting tomorrow, Friday, June 24. The result of this appointment would depend on whether the strike call is maintained or suspended.

What are the demands of carriers?

Among the demands of the carriers, the president of the National Union of Heavy Load Carriers (UNT), Javier Marchese, mentioned:

Regarding how the dialogue with the current government is progressing, Marchese pointed out in an interview with Perú21: “We have been talking for a month and everything is ‘no, no and no’. They want us to go on strike, so we are going to go on strike, we have no other way”.

He previously commented that he saw the will on the part of the head of the MTC, but that the solution to his demands passed through other sectors such as the Ministry of Energy and Mines and the Congress of the Republic.

Another concern of this sector reported in the media is that the MTC told them that it will not extend until December the exoneration of the Excise tax made out of fuel.

What foods would not enter Lima?

If the strike is complied with, products such as vegetables and fruits, which come from the interior of the country, would not be able to reach Lima’s wholesale markets.

Among the first we have garlic, spinach, carrot, lemon, onion, potato, tomato, cauliflower, lettuce and peas.

How will the strike unfold?

Marchese pointed out that his union members have been asked to stay in their garages since Sunday and not go out on the roads. While those who are already on the tracks must park next to them.

“We do not want violence and nothing that generates conflict”, he said this Thursday on RPP.

In the same line, Marlon Milla, president of the Guild of Transporters and Drivers of Heavy Cargo, asserted that the strike will only consist of a “engine shutdown”.

“Enroute units will park to the side and they will not move until the petitions are resolved”, mentioned.

What does the MTC do to resolve claims?

The Minister of Transport and Communications, John Barranzuelaruled this Thursday on the announced carrier strike.

As he said, there are unions that are presenting proposals with good reason, which are working together, even when “some do not correspond to solve them” through his portfolio.

“[…] and those that did correspond, we have already developed in the short time that I have been in office, we are working on them with the Ministry of Economy and Finance (MEF) and the Vice Ministry of Hydrocarbons (of the Minem) and other entities“, he claimed.

In relation to the dialogue with the union led by Javier Marchese, Barranzuela expressed that “he knows that there is all the predisposition of the sector to help him solve the problem”.

“We are working with him and most likely for tomorrow (Friday June 24) we have already developed the documents that are going to be channeled through the Council of Ministers to the Congress of the Republic to seek the definitive solution to these problems what ails them”, Barranzuela asserted from outside the Government Palace.