Chinese version: how the new model of the stock market in Russia can be arranged

Home » Business » Chinese version: how the new model of the stock market in Russia can be arranged 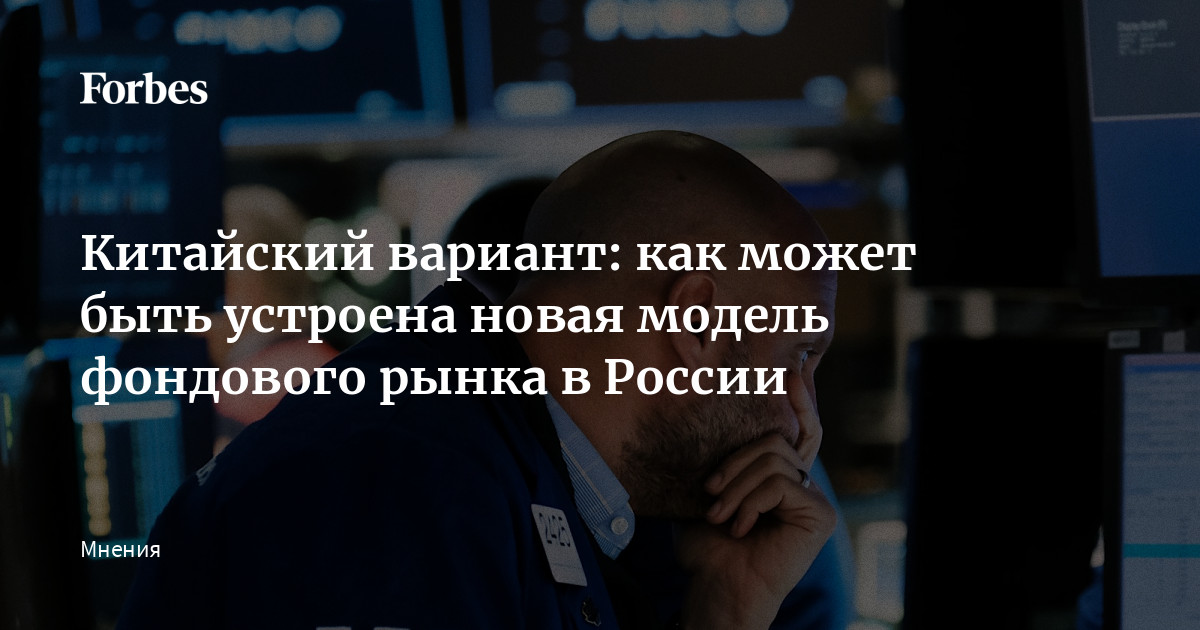 If we discard as the most unlikely most negative scenario of the complete abolition of the stock market in Russia, then its development can go according to two scenarios – Chinese and Iranian. The fundamental difference between these two countries is that the Iranian stock market is not of interest to global investors, and there is a high demand for the Shanghai stock exchange.

The Chinese stock market has two separate main trading floors – China Mainland (Shanghai Stock Exchange) and Hong Kong. And if the Hong Kong Stock Exchange gives global investors access to the market, then the Shanghai Stock Exchange (the fifth largest in the world, second only to the NYSE, Nasdaq, Tokyo and London) practically does not let them in, focusing on domestic players. There are enough reasons for this: from fears that part of the assets will be sold for next to nothing, and the money will go abroad, to requirements from global investors not provided for by the regulator.

The most striking example of a ban on the purchase of shares in Chinese companies for foreigners is the technology sector. Ownership of shares is organized through VIE (variable interest entity) – an offshore structure, the shares of which are sold, although de facto they do not give any ownership rights. This was done in order to circumvent the ban on foreign ownership of shares in companies where it is prohibited by Chinese law (for example, in strategic assets).

In particular, two classes of shares are traded on the Shanghai Stock Exchange: A (denominated in local currency, more than 1,500 companies) and B (denominated in dollars), while most companies have an A listing. In order for a global investor to buy or sell shares type A, it needs special permission from the local regulator, for which strict limits are set.

The Iranian stock market is more open to outside players. Under a certain set of conditions, permissions from compliance and local regulators, the fund can invest in the local market. But how interesting is it for investors?

The number of investment accounts in China is almost four times greater than in Iran (177 million versus 50 million), although China has not actively stimulated the growth of retail trading accounts. Iran, in turn, adopted a privatization program in 2005, under which it distributes shares of state-owned companies to the population. But since a significant part of the state-owned companies in this program are unprofitable, investors do not even receive dividends. Ordinary citizens are likely to simply sell shares to the market, but keep the accounts open until the next round of philanthropy from the government. Judging by the fact that Iran is following the path of internal privatization of state-owned companies among the population, so far the demand for the stock market remains low.

Russia is also gradually moving towards a stock market that is closed to global investors. Why don’t we follow the Iranian scenario, although talks and speculations on this topic continue? The size of the Russian economy and its deep integration into world processes does not imply working mechanisms for a forced transition to the Iranian scenario – complete isolation from the rest of the world. Russia does not need the stock market for the sake of the stock market, as in Iran, and privatization is a past stage.

The Russian stock market has an important difference from the Iranian one – a high level of real involvement of the population in it (the share of private investors has reached 25% of the economically active population of the country). The availability of endowments, pension funds and other means of collective and individual investment creates a wide range of requests that will be expressed in the creation of appropriate investment products: from direct market access to complex structural solutions, including mutual funds, pension savings, IIA, etc.

The presence of export earnings of companies will lead to the fact that sooner or later new liquidity will enter the market. It is the size of the Russian economy and its integration into the global economy that allows us to move towards the Chinese model of the stock market.

Recent sanctions against the National Settlement Depository indicate that the parties are not ready for the negotiation process even on issues that concern Western investors. As a result, the Russian market is moving at full speed towards creating a separate trading section for non-residents.

It was geopolitics that actually contributed to the emergence of two markets – local shares and depositary receipts traded on foreign exchanges. Until February 2022, these two trade lines coexisted peacefully. At the same time, 10-15 years ago, investors preferred to buy receipts, because it was technically easier, but in the past few years, the infrastructural development of Russian trading floors, in particular the Moscow Exchange, brokers and custodians, has allowed global investors to move towards local securities (plus it is cheaper due to the absence of additional fees from holders of receipt programs). As a result, the liquidity of shares on the Moscow Exchange of most companies was significantly higher than in London, and the process of switching to a local line occurred for logical reasons.

After sanctions and mutual restrictions, residents and non-residents began to exist already in separate guises. The former have a full list of rights, including dividends, while the latter have a very limited room for maneuver. The step towards forced conversion of receipts into ordinary shares may seem extreme, but if you remember that the receipts had a fairly high proportion of short-term investors-speculators, then this does not look so critical. As a result, I expect that receipts will gradually leave the Russian stock market and only local shares will remain in two separate (at the moment) segments – residents and non-residents.

The emergence of two separate order books within the same exchange will entail the desire of individual market participants to participate in arbitrage, expressed in different prices for the same securities in different sections. Of course, the demand for sections for non-residents will be driven by those who believe that the market will become united again, and those who will have the opportunity to transfer securities from one section to another and thereby earn on arbitrage.

Will there be demand?

To what extent global investors will be interested in the Russian market is an open question. Given the fact that most of the investment money is in the United States, it is most likely that at the moment investors will prefer not to increase the potential risk of sanctions. In other words, do not expect an influx of Western money. Asian, in particular Chinese, investors are also unlikely to be interested in Russia, since their own domestic market is huge and diverse. In the new paradigm, when the domestic market exists in isolation from external investors, one should expect both a decrease in volatility and a reduction in the size of the market itself. Thus, it will become more predictable, it will be easier for the regulator to track manipulations, and a reduced trading volume will bring stability to the market.

Due to a number of regulatory and other differences, a local investor is, in fact, cut off from the global stock market. Given that bank deposits in rubles do not cover inflationary risks, and that protective commissions are offered to those who prefer to keep their savings in dollars, for Russians the stock market is becoming a real alternative to protecting against the depreciation of savings and inflation.