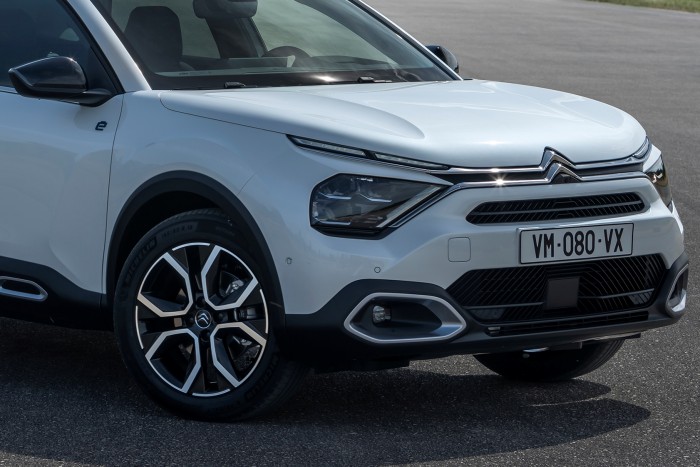 The Peugeot 408 presented last week will have a compatriot rival in the form of the Citroën C4 X and its electric version, the ë-C4 X. However, an important difference between the two models is that while Peugeot built the 408 on the basis of the EMP2 PSA platform, Citroën used the cheaper CMP platform, just like the C4 at the time.

In the case of the Citroën C4 X with gasoline and diesel engines, as well as with electric drive, a common feature is that hatchback, SUV and sedan features can also be discovered in its design. The unusual approach results in a crossover body that is 4.6 meters long and 1.8 meters wide overall, placing it between the hatchback C4 (4.36 meters) and the C5 X (4.8 meters). During its design, great emphasis was also placed on the space available in the interior, as evidenced by the larger-than-average rear legroom and the 510-liter luggage compartment.

The most versatile Citroën has been introduced, it will also have a rear bumper

The models making their debut are equipped with state-of-the-art connectivity services through the MyCitroën Drive Plus infotainment system. All of this can be controlled using a 10-inch HD screen, which can be fully customized using widgets. The new interface also has a voice control function, which can recognize natural human speech in no less than 20 languages. In addition, it can store and manage eight user profiles, each of which can be associated with two smartphones. TomTom navigation software with monthly updated map database is available in the system, free of charge for the first three years. There are also four USB connectors – two USB A and two USB C – in the C4 X, so phones and tablets can be charged without any problems.

Passenger comfort is also provided by the two-zone automatic climate control, which can be operated from two devices, as well as heated front and rear seats, a heated windshield and a heated steering wheel. When traveling at night, LED mood lighting is also available in the interior, and 16 open or lockable compartments offer a total of 39 liters of storage space in the name of practicality.

The Citroën C4 X will be available with three types of petrol, diesel and electric engines, but detailed technical data has only been provided for the latter. In addition to its 136 horsepower and maximum torque of 260 Nm, it is characterized by a high-voltage, 400 V, 50 kWh lithium-ion battery, which can last 360 kilometers on a single charge based on the WLTP standard. Its battery reaches 80% charge in half an hour with 100 kW fast charging, which means a range of 10 kilometers per minute, with a 32 A wallbox, the charging time is 5-7.5 hours. The top speed of the ë-C4 X is 150 km/h, and it accelerates from 0 to 100 km/h (in Sport mode) in 9.7 seconds.

The model will be manufactured at the Stellantis plant near Madrid, but only the electric version will be available in many European countries, while Citroën wants to expand with gasoline and diesel versions in regions such as the Middle East and Africa. Sales will start at the end of 2022.