‘Concert for Italy’ in Piazza Duomo, Chailly: “Now positivity at the top” / PHOTO 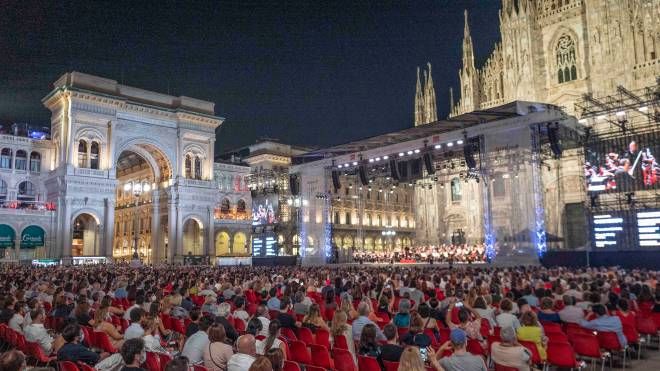 Milan, 13 September 2020 – The music has invaded Piazza Duomo, who silently listened attentively the orchestra conducted by maestro Riccardo Chailly and the engaging sound of Maxim Vengerov’s violin for the concert dedicated to Italy (with the support of UniCredit, Allianz and Long S). The first live of the La Scala Philharmonic.

Tonight, in the churchyard of the city’s Gothic Cathedral, the music brought everyone together transmitting “positve thinkings”. This was the wish of maestro Chailly who, before the start, greeted the audience with a “well found at last” explaining that music can be of great help to look to the future with confidence. “The attack of Don Pasquale – he observed – is like a laugh, a sign of joy that brings forward the positivity that we all want to rediscover. We find a positive thought, at the top “.His wish, appreciated by the audience of 2,600 people, many places allowed in the era of Covid, which applauded for a long time.

In addition to the award-winning violinist Vengerov with Mendelssohn’s concert there were famous symphonies, overtures and opera interludes: from Puccini’s Manon Lescaut, Bellini’s Norma and Verdi’s La Forza del Destino. And before leaving a surprise an encore that closed the concert with una standing ovation. Riccardo Chailly himself explained the choice: “Since we started with joy, we close with a Rossini gallop full of life and positivity with the William Tell by Gioachino Rossini “. Pure energy.

A little bit what the mayor Giuseppe Sala, present at the concert: “Right now symbols, such as the Scala, must be called together, because they can play an important role “he had said before the start. And again:” La Scala has been so for a long time, so it’s right that it does its part, and not just tonight “.

This evening was a piece of the symbolic reopening of the Scala and the whole city, which began on 4 September with Verdi’s Requiem, performed by the choir and orchestra of the theater inside the Duomo, and continued yesterday at the Piermarini with the performance of the Nona di Beethoven. The fil rouge is precisely message of hope and recovery and Riccardo Chailly, the principal conductor of the Philharmonic and musical director of La Scala, who has been on the podium on all occasions.

“After so many uncertainties, the ‘Concerto for Italy’ is finally back to revive the atmosphere of our city ” commented Roberto Selva, Chief Marketing & Customer Officer of Long S, convinced that “today more than ever this appointment testifies the incredible strength of culture which, despite the numerous difficulties of recent months, has already begun its gradual recovery “.” The concert in Piazza Duomo, which the Filarmonica della Scala realizes with the support of UniCredit since 2013, it has always best demonstrated the sharing of values ​​between UniCredit and Filarmonica – added UniCredit president Cesare Bisoni -: offering exceptional experiences capable of exciting people, generating a positive impact on society and promoting a sense of belonging which, in a particular period like the one we are experiencing is strengthened and strengthened ” Allianz Giacomo Campora confirmed that “returning to Piazza Duomo alongside the Filarmonica della Scala, for the eighth consecutive year and once again alongside the Municipality of Milan and UniCredit, takes on an even more intense significance this year”.