Home » CSKA chooses – a new flight or in the swamp …
Sports

CSKA chooses – a new flight or in the swamp …

Admittedly, I did not expect such a start to the season from CSKA. There is hardly a person who expected it, even the most loyal fans of Ludogorets and … Levski. Yes, this 0: 4 slightly smiled the supporters of the “blues” in times of financial crisis in their club, Dixon dramas, palm trees and liters of cold water. It’s easy for them – when CSKA wins, it’s Litex. When they lose, their euphoria is great. Strange, but this behavior has been with them for years. They have enough problems for me to pay more attention to them. In the following lines we will talk about those of the “Army”.

Even after the results in the controls that were played in Austria, I wrote that the red light for CSKA was on. It overheated for 90 minutes during the Super Cup match and shattered into (at least) four pieces. It is not such a big problem that the “reds” lost the match against Ludogorets. A huge problem is that they were defeated. And that their performance on the field was insulting, ugly, impersonal, abnormal. CSKA cannot play like that. The footballers of our most successful club do not have the right to walk the flannel and be a pale copy of the team that only months ago impressed in Europe and won the Cup of Bulgaria. Fans don’t deserve it. These supporters, who even after the fight from Razgrad supported Lyuboslav Penev and the players. They love and know how to forgive. Now the coach and players are indebted to them again.


Penev. Every line from me about him is perceived by a certain group of fans for “smearing the skis” and “preparing to change the coach”. So far I have not participated in any change of coach and it is unlikely to ever happen. I’m just not the factor that can do that. I like Lyuboslav Penev as a specialist. It is clear, a legend of CSKA, who knows well what the four letters and the emblem mean. He, if there is no place for the “Army”, who will ?! Ok, there is! But, I repeat – CSKA can not be such a repulsive team on the field and receive goal after goal from a team that is supposed to push from first place in our country. Because now everyone in the “Army” has a swollen tongue and pimples on their mouths from repeating for the title №32, which has been a mirage since 2008. The side factors are also clear to young children. That is why CSKA must be 100% ready for the feats of the green carpet. And not so tragic. Which referee could have stopped CSKA in Razgrad, during the rematch for the Cup or at 4: 1 in Borisova Gradina for the championship? Nobody! Because then the “reds” were with classes above Ludogorets. It was just the opposite now. Lubo Penev first said that his team is the favorite against the “eagles”, and after 0: 4 that it was just a sport and whether or not to make great dramas. Ok, we won’t do any dramas. But let’s see if there will be a legend of CSKA who will say that a 0: 4 defeat by any team is something normal and NOT dramatic. This is CSKA, people! They can’t crush you and humiliate you like that on the field. 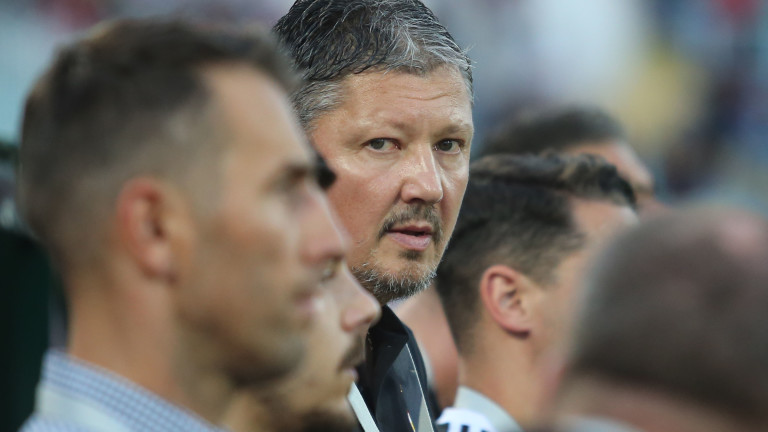 The worst and unnecessary thing is to look back and experience your failures constantly. This is the case in every sphere of life. Time does not return. It is not a cliché that you learn from irregularities and blunders, you learn a lesson. If you don’t, they will return with terrible force, they will become even bigger, and by the time you realize, you will have stepped into the swamp so much that there will be no escape.

Now CSKA has only one way – forward and up! It’s time for a new flight. Amok against Ludogorets should not be repeated. And everyone in and around the club must be united. Then things will stabilize and go in the right direction again. Hopefully, the urgent measures have already been taken, because matches are knocking on the door that can make the whole season of the “Army” meaningful. A new breakthrough in Europe will erase some of the bitterness left after 0: 4. It will raise the odds of CSKA even more, it will refill the club’s coffers with fresh funds. A win at the start of the efbet League against a team also playing in red is a must. Because immediately after that come the derbies with Arda and Ludogorets. Thus, in the coming weeks, the puzzle will be decided whether CSKA will fly again after a total collapse in the hole or will stay there. It all starts again. But happy is he who has something to do, someone to love and something to believe in. CSKA fans are in this role. Even after the Super Cup fiasco …

Filipov: CSKA without Ganchev would be like the beggars from Poduyane! Don’t forget it!

Index – Domestic – The ball stands around the legacy of Ildikó Pécsi

The highest paid athletes in 2021 according to...

Gary Sanchez takes a missile out of his...

how our views of athletes’ mental health have...

River, without its starters, receives Huracán for the...