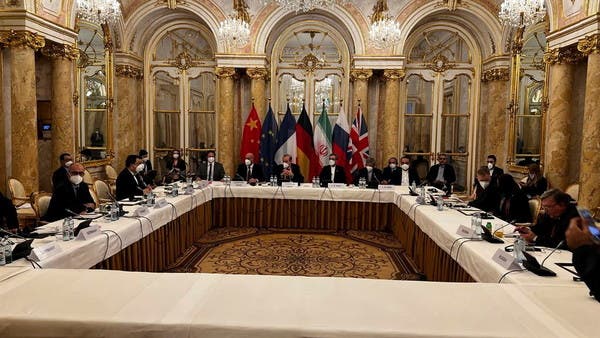 Sources from Vienna’s negotiations on Iran’s nuclear deal, which stopped on Thursday, said that there are deep differences over the sanctions that Iran demands to be lifted.

The sources said that it is impossible to expect a timeframe for achieving results in the negotiations, which return to resume next Monday, but there are weeks, not months, in order to reach an agreement.

The sources stated that any discussion of lifting the sanctions must be paralleled with the talk about the Iranian side’s nuclear commitments.

On the other hand, the head of the Iranian delegation to the Vienna negotiations, Ali Bagheri, announced that the discussions that took place within the framework of the eighth round of nuclear negotiations focused mainly on the issue of canceling the embargo.

In addition, the Russian envoy to the Vienna negotiations, Mikhail Ulyanov, told “Iran International” television that “reaching an agreement on restoring the Iranian nuclear agreement is possible in the first half of February.”

Ulyanov also announced to reporters after the adjournment of the sessions on Thursday that he was “optimistic about reaching an agreement.”

He said, “Russia is politically helping the parties to find a common language, and to facilitate access to the main goal, which is to restore the agreement.”

He pointed out that “the negotiations are now in advanced stages, and drafts are being written.”

The Russian envoy also revealed that senior officials concerned with Iran from the United States and Russia met in Vienna.

Delegates from both sides said Moscow and Washington were coordinating an effort to salvage the 2015 Iran nuclear deal.

Earlier, Ulyanov stated, on Twitter, that he met twice Wednesday with the US special envoy to Iran, Robert Malley.

He added that the consultations represent the closeness and coordination between the American and Russian delegations in the context of the Vienna talks, an important precondition for making progress towards resuming work on the Joint Comprehensive Plan of Action, i.e. the “nuclear agreement.”

He also stated that the two countries are continuing an intense dialogue to revive the Joint Comprehensive Plan of Action (the nuclear agreement).

Separately, US Secretary of State Anthony Blinken had a phone call with his counterparts from France, Germany and Britain, and Iranian nuclear talks were among the topics discussed, according to the US State Department.

In a statement about the call, State Department spokesman Ned Price added that the minister and his counterparts also discussed their shared concerns about the pace of developments in Iran’s nuclear program as the time approaches for Tehran to return to the Joint Comprehensive Plan of Action.

It is noteworthy that the agreement concluded in 2015 was to lift sanctions on Iran in return for imposing severe restrictions on its nuclear activities, but former US President Donald Trump withdrew his country from the agreement in 2018.