Departmental elections: the canton of Chartres 2 “in continuity”

Home » News » Departmental elections: the canton of Chartres 2 “in continuity” 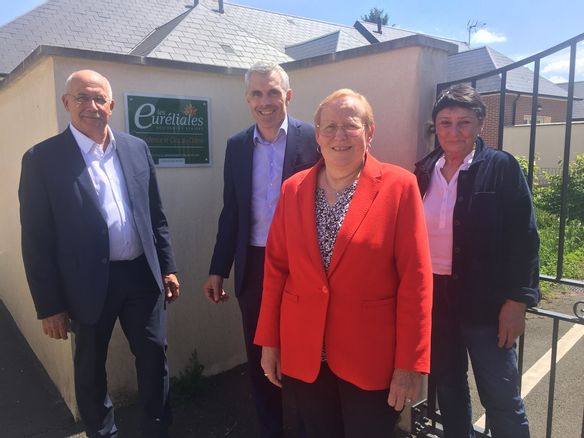 They register their candidacy in “continuity”. The two outgoing departmental councilors of the canton of Chartres 2, Élisabeth Fromont and Franck Masselus (LR), elected within this community respectively since 2008 and 2011, are running for a new mandate.
Élisabeth Fromont presents herself with a new replacement. Annick Lhermitte, mayor of Dammarie, who takes over from Brigitte Franchet, former mayor of Nogent-le-Phaye, who did not stand for the municipal elections of 2020.

“I accepted with enthusiasm. Rural municipalities need the Departmental Council to advance their projects, ”says Annick Lhermitte.
Franck Masselus is leaving with Gérard Besnard, the mayor of Morancez, who has been his replacement since 2015. “I support this pair, listening to the city and the countryside. They are effective in the field, ”notes Gérard Besnard.

The candidates, who position themselves on the right and in the center, believe that “they still have work to do”.
“Since Claude Térouinard was elected president at the end of 2017, the Department has taken on a more dynamic dimension. Heavy investments, which we have been calling for for several years, have been made, ”underlines Élisabeth Fromont, current vice-president of the Departmental Council, also 1st deputy mayor of Chartres and vice-president of Chartres Métropole.

In six years, women have made their place in the hemicycle of the Departmental Council of Eure-et-Loir

Franck Masselus, also deputy mayor of Chartres and vice-president of Chartres Métropole, highlights the “complementarity of communities to carry out projects, such as securing roads or developing town centers”.
The pair intends to continue their action in terms of “digital development” and “the fight against medical desertification”. Two subjects which “took on importance during the health crisis”, observes Franck Masselus.

Élisabeth Fromont wishes to continue to invest in solidarity. The elected representative evokes a file that is close to her heart: the creation of a one-stop shop to simplify user procedures. The candidates, who fear a “strong abstention”, have planned outside meetings to discuss with the inhabitants.