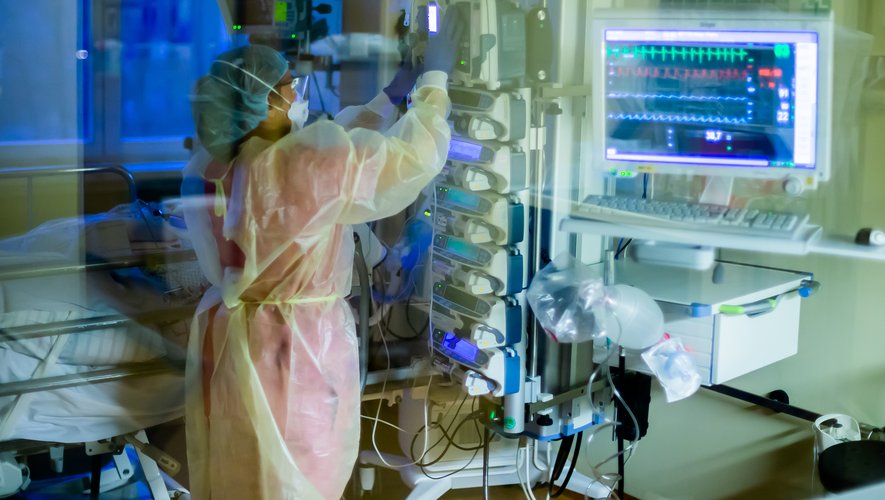 To follow regional, national and international information live on the Covid-19 epidemic.

– 5 p.m .: In the US, Omicron continues to disrupt air transport

Airlines around the world further delayed or canceled several thousand flights on Friday, with the impact of the Omicron variant of the coronavirus continuing to disrupt their business on New Year’s Eve.

More than 2,600 flights in total had been canceled at the start of the day, including more than 1,200 in the United States domestic market or from an American airport, according to the count of the flight tracking site FlightAware.com, which had also identified more than 4,600 delayed flights. While the holiday season is a peak of activity for the sector, the very rapid spread of the Omicron variant has caused a sharp increase in the number of COVID-19 infections which has forced many pilots and flight crews to be placed in isolation.

Many employees in the sector are also reluctant to work overtime despite financial incentives, explain some unions who highlight the fear of contracting COVID-19 and that of having to face the refusal of some passengers to respect health measures. in force.

The New York City Council has announced that it will severely limit the number of people allowed to gather in Times Square for New Year’s celebrations but it is criticized for not having canceled them altogether.

Many large American companies have also decided to increase the use of teleworking from next week or to postpone the return to the office initially planned for the beginning of January.

The French Football Federation (FFF) decided this Friday, December 31 to relax the regulations of the Coupe de France to allow the holding of the round of 16 scheduled for January 2 to 4 and faced with an increase in cases of Covid in clubs .

According to information from RMC Sport, confirmed by the FFF to AFP, the latter will exceptionally suspend the article of the regulations of the Cup requiring the presence “on the score sheet of at least seven players who took part in one of the last two official matches played by their first team “.

The competing clubs will therefore be able to draw more heavily from the reserve team and the youth teams to form their starting XI.

With 21 players unavailable due to the Covid, Bordeaux is particularly concerned before its trip to Brest on Sunday.

The Girondins, who wanted the match to be postponed, expressed their dissatisfaction and their questions on Thursday in a press release. But the FFF regulations do not provide for postponement in the event of a cluster.

Conversely, the Ligue 1 match between Angers and Saint-Etienne, scheduled for Sunday January 9 and counting for the 20th day of Ligue 1, was postponed this Friday December 31 by the Professional Football League (LFP).

Angers, eliminated in the 32nd of the Cup by Linas-Montlhéry, in mid-December, announced Thursday 19 positive cases in its workforce and asked the League to postpone the meeting.

– 3 p.m .: the maximum deprogramming requested from hospitals in Ile-de-France

The regional health agency (ARS) of Ile-de-France has asked the Ile-de-France health establishments “to deprogram the maximum of surgical and medical activities that can be” from this Monday, January 3, due to the increase in hospitalizations of Covid patients.

– 2:30 p.m .: the Angers – Saint-Etienne football match on January 9 postponed due to the Covid

The Ligue 1 football match between Angers and Saint-Etienne, scheduled for January 9, is postponed due to the large number of cases of Covid-19 within the Angevin workforce, the Football League announced on Friday, December 31. professional (LFP).

Angers, 11th in Ligue 1, announced Thursday that 19 of its players had tested positive for Covid-19 and requested the postponement of this match counting for the 20th day against the Stéphanois, who are fighting for maintenance.

“After the opinion of the national COVID FFF commission concerning the number of Angers SCO players tested positive RT-PCR and absent with certainty for the match against AS Saint-Etienne, the Competitions Commission of the LFP (… ) decides to postpone the match counting for the 20th day of Ligue 1 and initially scheduled for Sunday January 9, 2022 at 3 p.m. “, details the LFP in a press release.

“The new date and time of the meeting will be communicated later,” said the League.

The Angevin formation is, with Bordeaux, where 21 players are unavailable due to Covid-19, one of the most affected in the French championship.

The Bordelais, who are due to go to Brest on Sunday for the round of 16 of the Coupe de France, have also asked for their match to be postponed, but the regulations of the French Football Federation (FFF) do not provide for him. , no carry forward in the event of a cluster.

The British drug agency, the Medicines and Healthcare Products Regulatory Agency (MHRA), announced this Friday, December 31 in a press release that it had authorized the oral treatment of Covid-19 developed by Pfizer in adults suffering from a mild to moderate form of coronavirus and likely to develop a serious form due to their medical history.

In view of the available data, the British regulator judged that this drug, called Paxlovid, was “safe and effective in reducing the risk of hospitalization and death” in this population.

Paxlovid treatment combines a new active substance (PF-07321332) and ritonavir, an antiretroviral drug that has long been used in the treatment of HIV-AIDS, which blocks viral enzymes and therefore makes the drug more effective.

The treatment, which should be started as soon as possible, is in the form of two tablets (one for each active substance) to be taken orally twice a day for five days.

Israel will expand its campaign of second vaccine booster against Covid-19 – called “fourth dose” – to the elderly who do not reside at home but in dedicated residences or in care establishments, announced this Friday, December 31. Health Minister Nitzan Horowitz, citing their vulnerability to infections and their high risk of being exposed to the coronavirus.

This announcement comes the day after the validation by the Director General of Health of Israel, Professor Nachman Ash, of this second vaccine booster dose for immunocompromised people, the administration of which began on Friday.

A clinical study was launched on Monday with a group of 150 caregivers at a hospital in the suburbs of Tel Aviv to determine whether or not a second booster dose injection is necessary, especially in the face of the rapid spread of the disease. Omicron variant of the coronavirus.

While solid data remains limited, both on the severity of the cases of Covid-19 linked to contamination by this variant, and on the possible effect of a “fourth dose”, the first results of this clinical trial should be available within two weeks.

The director of the Institute of Global Health in Geneva, Professor Antoine Flahault posted on Twitter the increase in the reproduction rate of the virus in France. The latter, which represents the number of people infected on average by a patient, amounts to 1.33.

– 10 a.m .: record level of hospitalizations among children under 10

Nicolas Berrod explains that the incidence rate fell last week in children under 10 (linked to the drop in screening during the holidays), but the number of hospital admissions continued to increase : 254 in one week, a record level, according to figures published by Public Health France.

The incidence rate fell last week in children under 10 (linked to the drop in holiday screening), but the number of hospital admissions continued to rise: 254 in one week, record high. #Covid19

Indeed, he specifies: “The number of children under 10 diagnosed with Covid hospitalized in France exceeds 200, for the first time since the start of the pandemic.”

– 9 am “We can neither be alarmist nor reassuring: we sail on sight”

Professor André Grimaldi was the guest of LCI this Friday, December 31. He explained that he hoped “that the situation in France resembles that of South Africa, which passed the Omicron wave without a peak in deaths.” With the vaccine, there is protection against severe forms: let’s use- overwhelmingly. “

He added for the moment, “we can neither be alarmist nor reassuring: we sail on sight”

“The inconsistencies” in the restrictions, “we can underline them. Basically, the only consistency is” Vaccinate yourself and respect the barrier gestures “”.

He especially said he was “shocked by people who consciously refuse the vaccine”.

“They benefit from solidarity, the least of things is to be in solidarity with the vaccination.”

“The real problem is that patients will die while they are vaccinated because they have other pathologies that we could not take care of because of the beds occupied by unvaccinated people” .

South Africa this Thursday, December 30, lifted the nighttime curfew put in place to deal with the fourth wave of the coronavirus epidemic mainly caused by the Omicron variant, which it was the first country to identify. a little over a month ago, stating that the peak of the wave had passed.

The government said it had made this decision after reading the trajectory of the epidemic, the progress of the vaccination campaign against Covid-19 and the reception capacities in the health sector.

“All the indicators suggest that the country could have overcome the peak of the fourth wave at the national level”, it is written in a statement released earlier in the day after an extraordinary council of ministers.

The level of health alert in the country has been lowered to the lowest threshold.

According to data from the Ministry of Health, the weekly average number of coronavirus infections fell 29.7% in the week ending December 25.

– 8 h: the Omicron variant is now largely in the majority in France

In its daily update, Public Health France (SPF) indeed indicated Thursday, December 30 that the Omicron variant was “now in the majority”, while 62.4% of tests show a “compatible profile” with the variant first reported in South Africa last month.

This information comes while for the second consecutive day, the number of cases in France exceeds the bar of 200,000 positive cases in 24 hours, with this Thursday 206,243 new contaminations.

France reported this Thursday, December 30 of 206,243 new cases of coronavirus contamination, a number close to the record set the day before, while the WHO describes a “tsunami” to qualify the situation as a global epidemic, with one million new cases detected;

As for hospitalizations, 18,321 Covid-19 patients are currently being treated, while there were 17,856 the day before, and 16,060 last Thursday. Among them, 3,506 patients are treated in intensive care, an increase of 37 patients in twenty-four hours. And 180 additional deaths in hospital.

– 6 a.m .: the symbolic milestone of 1 million new cases per day in the world crossed

The number of new contaminations in the world is very impressive. The symbolic milestone of one million new daily cases was crossed for the first time during the week of December 23 to 29, with 1,045,000 cases, according to an AFP count.