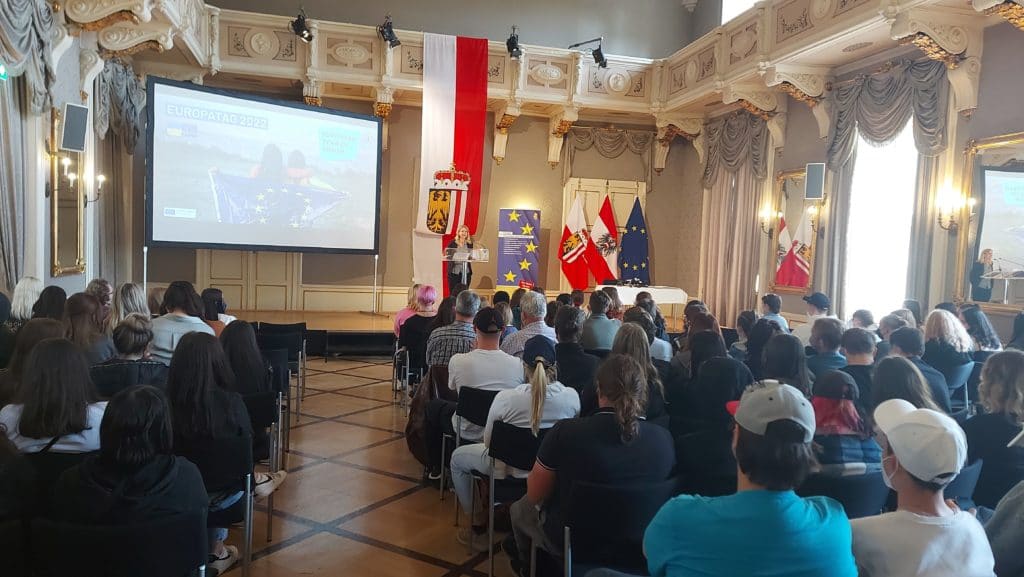 More than 130 Upper Austrian vocational school students accepted the invitation from EUROPE DIRECT Upper Austria to the Europe Day for vocational school students in the Redoutensäle in Linz. After a welcome by the regional youth councilor Dr. Wolfgang Hattmannsdorfer, they got an overview of how the EU works and its achievements and opportunities for young Europeans in five workshops and a Europe simulation game:

In the workshop by Dominik Ortner from the Enterprise Europe Network of the Upper Austrian Chamber of Commerce, the young people were able to obtain information about the functioning of the European internal market. In his workshop, Klaus Zeugner, speaker at the University of Education in Upper Austria, presented the development of the EU up to the present and was also able to dispel some myths surrounding the EU. Katharina Šarić-Gruber, a consultant at the Federal Ministry for Climate Protection, Environment, Energy, Mobility, Innovation and Technology, presented the subject of the climate and energy transition in the EU and Austria in a way that was easy to understand. In a role play led by Huberta Heinzel and Thomas Weber from the European Parliament Liaison Office, the young people were able to learn more about the basics of European democracy. Susanne Rosmann, head of the Upper Austria regional office for EU youth programs at the 4YOUgend association, and Lisa Hard from the Young European Federalists in Upper Austria showed what opportunities the European Solidarity Corps offers to get involved in charitable projects in one’s own country or abroad. Benjamin Schwarzböck from the Youth Service of the State of Upper Austria also gave an overview of the many opportunities for stays abroad.

In the final Europe quiz, the knowledge acquired in the workshops could be put to the test and attractive prizes such as Interrail tickets provided by ÖBB or a trip to Brussels could be won.

“Especially with all the current challenges – from the war in Ukraine to the major transformation processes in energy, mobility, environment and digitization – it is particularly important to once again raise awareness that we are all part of Europe and that we are all making our contribution be able. With today’s Europe Day event for Upper Austria. Vocational school students deliberately focused on young people in the European Union. The young people are the future of Europe, which is why they were also shown the possibilities and chances of the EU for Upper Austria and for them personally. At the same time, it was also about letting their view of the EU flow into our daily work and giving them a voice,” emphasized Markus Achleitner, State Councilor for Economics and Europe, in his statement at the end of the event.

More on this at https://www.land-oberoesterreich.gv.at/279148.htm