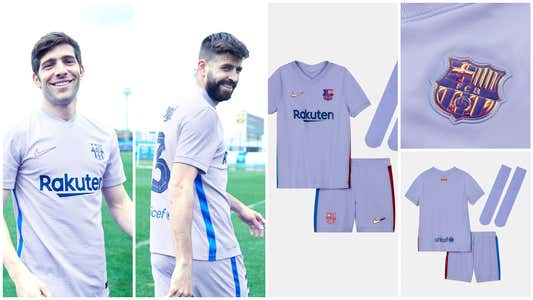 The FC Barcelona has presented the official jersey for the 2021/2022 season in an act in the Camp Nou The new jacket has seen the light with Ansu Fati, Riqui Puig, Marta Torrejón and Caroline Graham Hansen as models. The Blaugrana club’s shield is the inspiration for the design of the new shirt which is made with “100% recycled polyester, obtained from recycled plastic bottles that are melted down to obtain a very fine thread”, as announced by the club itself.

A few days later, the Blaugrana club presented its second kit, which this season will be purple, a new color that, according to the club, “wants to send a message in favor of the empowerment of women.”

“On the front, at chest height, fans will find the silhouette of the Cross of San Jordi, patron saint of Barcelona, ​​and the senyera, the flag of Catalonia. On this occasion, however, these two elements are reinterpreted with the Blaugrana colors, while, in the lower part, the traditional vertical stripes are maintained, which for this occasion are stylized to give a more modern touch to the layout”. This is how FC Barcelona explains the design of the new first kit, which moves away from the traditional format of vertical stripes.

In the upper part of the back, just below the neck, is the flag of Catalonia, another common feature on FC Barcelona shirts.

Another novelty is presented in the pants, with one leg of each color.

“It is committed to purple – the color that is born from the fusion of blue and maroon and with which the fight for gender equality is popularly represented – as the absolute protagonist, while maintaining a reference to the Barça stripes, incorporating one in each As a result of the Club’s commitment to women’s sport, Barça also wanted to engrave on these side stripes an adaptation of the phrase from the anthem “Tots units fem força”, which for this occasion has also been declined in feminine: “Totes unides fem força”. The new kit adopts purple as the predominant color and, for the first time, it does so in an almost pastel shade, since in the 2016/17 season purple was also the protagonist, but on that occasion it was presented in a much darker shade.

This year, in addition, this color is also used in details such as the shield, to which an iridescent effect is applied, the logos, the numbers and the name on the number. A pattern that is only broken with the addition of a blue vertical stripe on the left side and a maroon vertical stripe on the right side. And it is here where the reference to the anthem that represents all the Culers, the Cant del Barça, has been incorporated. The peculiarity is that while on one side the original phrase has been maintained, on the other it has been adapted in feminine: “Totes unides fem força”. Also, the lower edge incorporates a trace with the colors of the rainbow flag, which symbolize diversity.

The kit is completed by the pants, also in purple and with the blaugrana stripe on the sides and the socks in the same colour, where the writing CULERS stands out and the Nike logo in the central part. The away kit will be marketed with the Rakuten logo, the men’s team’s main sponsor on the front, and the STANLEY logo, the women’s team’s Main Partner,” explains the club in its official Web .

Price and how much does it cost

Barcelona has put several shirts on sale. The price of the shirt that the players will wear is 145 euros and of 125 euros for what is known as the original model for children. To complete the outfit, pants are priced at 69.99 and socks at 17.99 euros.

They are expected to offer a cheaper jersey known as a replica but it is not for sale yet.

Yes, the models for the little ones are already on sale. Barcelona does not neglect the smallest and there is a model for children with a price of 65.99 euros that includes a shirt, pants and socks.

There is also a model baby at 59.99 and which also consists of a pack of shirt, pants and socks.

“The new kit will go on sale at 09.00 am (CET) on June 16 exclusively in the Club’s e-commerce and at the Barça Store on Passeig de Gràcia, the T-1 Airport, La Roca Village and at the Camp Nou. As of June 21, the shirt will also be available in the rest of the usual sales channels. For the first time, in addition, the pants of the women’s team will also be marketed, along with those of the men’s team.