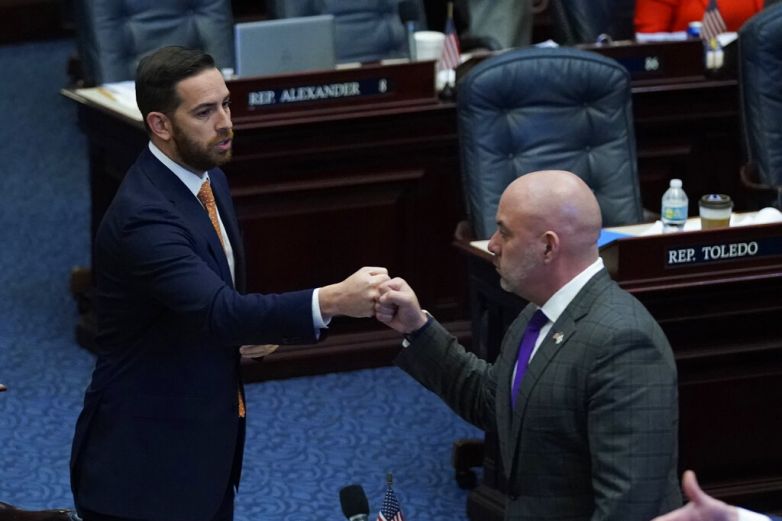 Tallahassee.- All Florida government agencies would be prohibited from doing business with transportation companies that bring migrants who are in the country illegally to the state under a bill that was sent Wednesday to Gov. Ron DeSantis.

The bill is a priority for the Republican governor and an attempt to stop the federal government from sending people who cross the border into Florida illegally. DeSantis, who is seeking reelection this year and is a potential presidential hopeful in 2024, has repeatedly criticized President Joe Biden’s immigration policies.

The House of Representatives voted 77-42 in favor of the bill, in which Republicans say illegal migration must be addressed. Democrats say the only reason to pass the proposal is to further DeSantis’ political ambitions and spark fears about migrants.

“I came to the United States the right way,” said Republican Rep. Webster Barnaby, who immigrated from England. “This is all about enforcing the law. It’s about preventing people who are illegally bringing people directly into Florida from being able to do so.”

Barnaby commented that migrants being transported to the states after illegally crossing the border with Mexico “is practically an invasion.”

Once DeSantis signs the measure, it will prohibit any government agency, state or local, from doing business with any airline, bus or transportation company paid by the federal government to bring migrants who are in the country illegally to Florida.

Read also  Canada: to be crowned in the CONCACAF before the World Cup

“This is another example of political rhetoric and campaigning disguised as a bill,” he said. “This entire proposal is a front that is used to increase the campaign coffers in 2022 and 2024, because I know that one second after the governor signs this bill, there will be a fundraising email.”

Immigration has been one of the main points of contention for Republicans attacking Biden, whose approval has slipped as the GOP seeks to regain control of the House of Representatives in the 2022 midterm elections.

Republican Rep. Melony Bell said the bill is about making the state safer. She noted that a constituent sent her a photo last week showing two buses dropping off immigrants in the country illegally.

“These people were abandoned, put on the streets, without work, without food, without shelter,” he said. “Once they get here, they have nothing to do. They get into crime, they start driving while intoxicated, they kill citizens.”

The proposal also expands on a bill DeSantis signed into law in 2019 that would ban sanctuary policies by local governments and require local law enforcement to do their best to work with federal immigration authorities.

Parts of that law were struck down last year by a federal judge who repeatedly said the law was racially motivated and that its supporters had failed to show that it was necessary to reduce crime. The state appealed the decision and the matter remains unresolved.