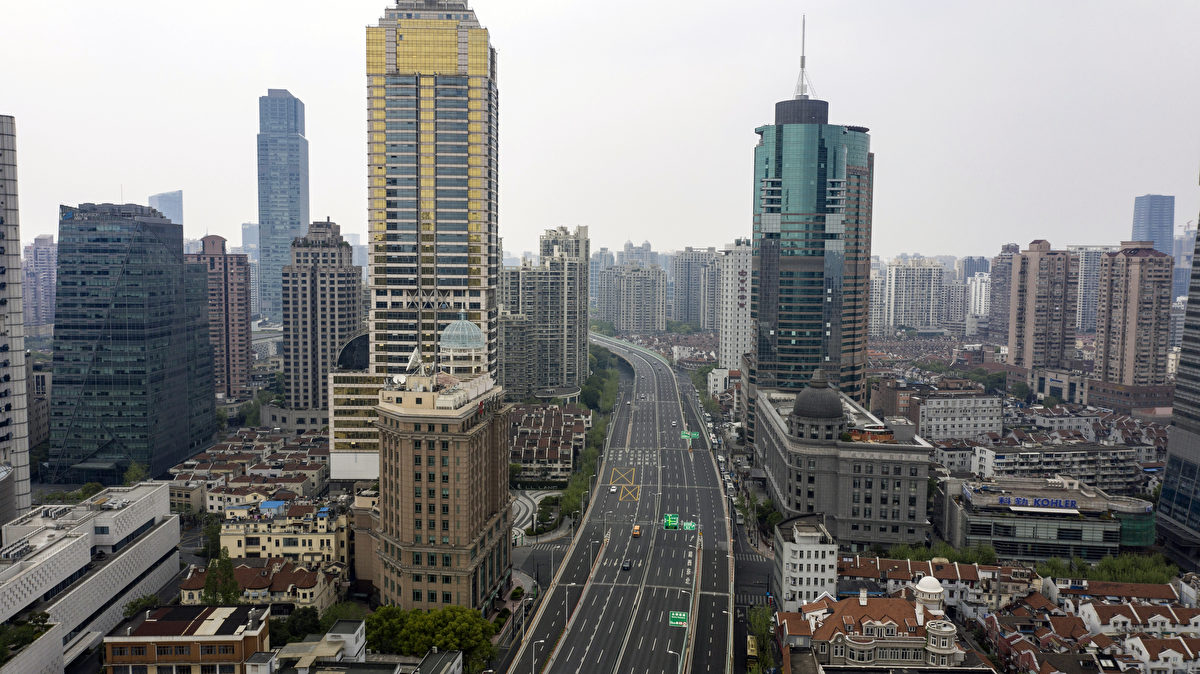 [Epoch Times, May 9, 2022](The Epoch Times reporter Luo Ya interviewed and reported) The CCP’s extreme prevention and control measures have been upgraded again. One person infected with the epidemic in Shanghai moved the whole building, and even blocked group purchases and unified distribution of three meals a day. Great public resentment. Some lawyers have called for a legal review of local administrative decisions to see whether there is power to impose such overall quarantine measures on normal residents.

On May 8, the headline news disclosed that Shanghai’s epidemic prevention and control has been upgraded, and a 5+5 isolation mechanism has been implemented. The so-called 5+5 means that if one person is found to be positive, the neighbors on the entire floor need to go to the shelter for 5 days together, and then come back and quarantine at home for 5 days; what’s more, the entire building needs to be quarantined.

The report questioned, “Is it reasonable for the non-positive people in the whole building to be concentrated in the positive places for isolation, which increases the probability of infection?”

Although no relevant policy notice has been found in the official news released by Shanghai, Mr. Wang, a citizen of Pudong, introduced to The Epoch Times on May 9 that the community notified yesterday that one positive person will be transferred throughout the building. Anyway, (policy) will change every day.

“He has nothing to do with nucleic acid (testing) every day, so long as he has to make (yang) from you.” Mr. Wang said angrily, “Just now when I went down, the residents were complaining and scolding. We have done a good job of taking care of each other. , I have been doing it for two days, and today ten people will come to take care of it, which is meaningless at all.”

The community where Mr. Wang lives is a closed area in Pudong, because there are always one or two positive nucleic acid tests in the community.

“There are 33 house numbers in our community, and the positives keep popping up. We can’t do anything about it. We don’t know where he came from. The residents are complaining. It seems that there is no hope of lifting the block. Forget about the New Year’s Eve dinner, they are all desperate.” He emphasized.

Mr. Wang said that not only the community was blocked, but the roads outside were also blocked. “Leave a big road, and seal all the other small roads. I’ve never seen this before, the bigger circle and the smaller circle are closed.”

On May 7, Baoshan District issued a “5.7 Baoshan Epidemic Prevention Policy Change Reminder” to residents, stating that the latest epidemic prevention policy in Baoshan area is “a close connection at the same level, and a close connection must be pulled away”, and warned that “under the current policy, The same building is closely related. Don’t take chances!”

At the same time, there is also video evidence. The police came to warn residents who did not want to transfer. The dialogue confirmed the 5+5 upgraded isolation policy.

The police said that the policy of close contact at the same level starts today (May 7), and the quarantine time is 5+5, and explained that it is 5 days of quarantine + 5 days of community monitoring and observation (home isolation).

When residents asked to see specific policy documents, the police responded directly with “no” and said, “You can follow our public security. Recently, the law we have used the most is Article 50, Paragraph 1, Item 1 of the Public Security Law Penalty Regulations. : All your refusal to the government will be punished by law and order as refusal to implement orders and decisions under the state of emergency.”

The police also warned, “You must obey the overall situation of epidemic prevention. If you don’t do it, you will be at your own risk. If you don’t cooperate, forced transfer will be used.” Maintain order.

Secretary of Fengxian District: Not even a fly with sun is allowed to fly in

Two days ago, Toutiao disclosed that from the evening of May 5, Shanghai’s prevention and control measures have suddenly been upgraded! One person infected with the whole building transfer.

For example, on May 4, a nucleic acid test was conducted in Tuanjiehuayuan, Xinzhuang Town, Minhang District, and one person in Building 36 was confirmed to be positive. In the evening of the same day, all the remaining residents in the entire building were suddenly transported and quarantined, and the environment of the community was sterilized at the same time.

The chat records of the Fengxian street cadre group were published in the WeChat group, which introduced that Shanghai and the district held video conferences to kick off the so-called Great Shanghai Defense War. According to the requirements of the city and district, where there is a mistake, which position should be dismissed, and the dismissal still needs to be done.

Secretary Zhuang of Fengxian also requested that all shops, communities, and the society should be strictly guarded! If it is positive, check first and dismiss first. The strictest measures must be implemented before May 20, and a fly with positive is not allowed to fly into Fengxian.

Previously, the mayor of Pudong District issued a military order, claiming that the number of positive infections should be reduced to less than 260 by May 10.

On May 6, Li Qiang, secretary of the Shanghai Municipal Party Committee, asked officials at all levels to “issue military orders at every level” at a mobilization meeting, and to be held accountable for dereliction of duty. He also mentioned the need to “fight the people’s war well.” Mayor Gong Zheng demanded that Pudong New District, Xuhui District, and Minhang District be strengthened to carry out sweeping buildings, streets, and knocking on doors, so that no one household is missed and no one is left behind.

Mr. Wang said, “You kill the flies first, and then you fight the virus. You can’t kill the mosquitoes and flies. Do you think it’s possible? The virus can’t be seen, touched, or smelled. It’s impossible.”

He emphasized, “Now it’s available as soon as it’s released, and that’s the truth. It’s just been released for four hours in the opposite community, and they’ve blocked it again.” As far as he knows, Songjiang and Zhabei have both. of this phenomenon.

Mainland headline news reported that a “Notice to Hongkou Residents” issued by the Hongkou District Epidemic Prevention and Control Leading Group Office, which mentioned that according to the city’s unified deployment and the needs of Hongkou District’s epidemic prevention and control work, it is planned to be held from May 8 to 15. Continue to strengthen the management and control of the “three areas”, and the prevention area will be upgraded management.

Mr. Hu from the Pudong Prevention Zone told The Epoch Times that, logically speaking, his community is the last day of the blockade today. It’s like saying three or four days longer.”

He also said that the extended period is the same as staying at home in the closed control area, and it is estimated that it will no longer be able to be closed. “Because there are many older people in our community, the whole community has not been positive for half a month. It should be said that it is unlikely that these people will be locked in the building and will not be released. This is impossible.”

According to Mr. Hu’s analysis, according to the requirements of silence, all takeaways and group purchases have been stopped. “But it seems to be okay today. Everyone is delivering things. It’s almost the same as usual in the community, and there’s no change.”

And Shanghai citizens provided The Epoch Times with a copy of the “Notice to the Residents” issued by the Residents Committee of the Three Villages of Laoshan Village in Pudong on May 7, which requires that in addition to nucleic acid sampling, they should ensure that they stay at home and do not move people around. Suspend all courier, takeaway, group purchase and other material delivery. All residents have three meals a day guaranteed by the street. Volunteers deliver to the corridor. The three meals are set at 6:30 for breakfast, 11:30 for lunch, and 5:30 for dinner.

The Epoch Times reporters called the Laoshan Three Villages Neighborhood Committee at different times and couldn’t get in touch with the office staff.

Shanghai will be fully cleared in mid-May?

According to the latest epidemic data disclosed by Shanghai officials on May 9, from 0:00 to 24:00 on May 8, there were 322 new confirmed cases of local new coronary pneumonia and 3,625 asymptomatic infections.

On May 7th, Jing’an District held a decisive victory oath meeting, which conveyed the so-called spirit of the central government and the municipal government, as well as the content of Mayor Gong Zheng’s investigation speech in Jing’an that morning. Some internal information was disclosed in the local WeChat group. Among them, Shanghai’s general target was within 2,000 cases in the city on May 10, and it was completely cleared in mid-May. Secretary Yu of Jing’an District requested that there should be no more than 10 cases per street on the 10th.

The secretary of the Pudong District Party Committee also set that on May 10, the number of positive diagnoses in the entire district will be less than 260.

Mr. Hu believes that this data has been falsified. He is now engaged in political campaigns, not anti-epidemic. So what he doesn’t care about is doing this. From their remarks, we can see the same words and shadows of the Cultural Revolution.

Mr. Wang said that the CCP can completely clear the paper. He said that it will come down as soon as it falls. Who knows whether it is true or false, anyway, the common people don’t believe them anymore. How to check them when they are locked at home in the community.

Some residents in Shanghai who were sent to the quarantine point were asked by the community to hand over their keys before leaving their homes, so that “Da Bai” could enter the house to disinfect them. When they came home from the quarantine point or the cabin, they found that there were a lot less items in their homes, even the cash was gone, and all the food in the refrigerator was thrown away. Many residents called the police.