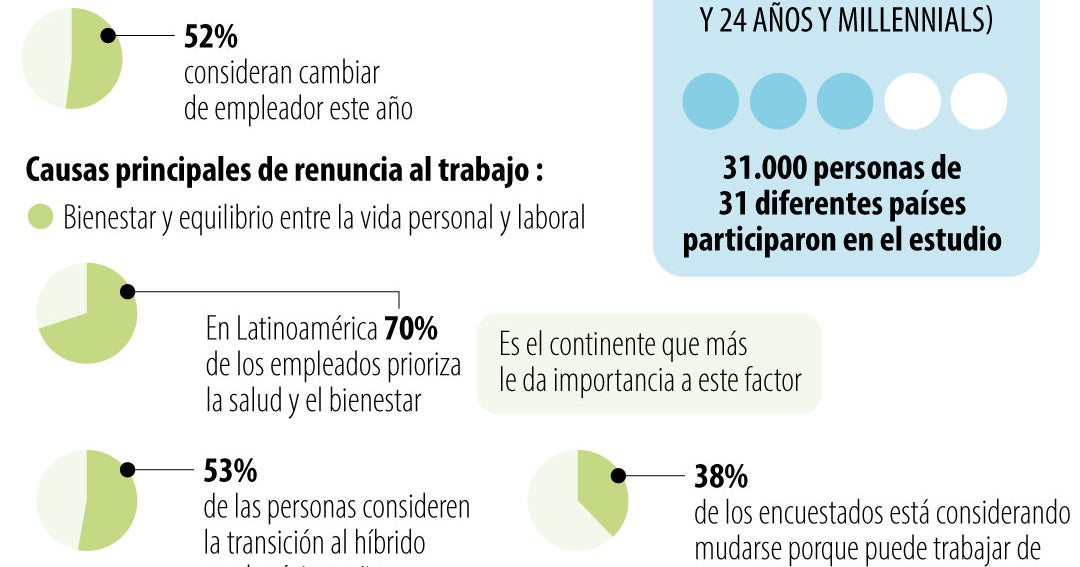 It is evident that in recent years the concept of work has been drastically transformed, not only because teleworking was reaffirmed with the pandemic, which allows work activities to be carried out from almost anywhere in the world, but also because with the arrival of new generations to offices and senior positions, topics such as emotions and well-being began to be prioritized.

According to the latest Microsoft report, Work Trend Index 2022, which revealed, among other things, the preferences and trends of Generation Z and Millennials in the workplace, 52% of those surveyed consider changing employers this year, which represents an increase of three percentage points over last year.

This trend corresponds to the scarcity of human talent that exists globally, due to the constant and massive resignation that was born in the United States and that spread to all regions of the world.

In this order of ideas, and taking into account that the study carried out by Microsoft took into account more than 31,000 people from 31 countries, it was also found that the two main causes of leaving work are well-being and balance between personal and work life. Likewise, the results showed that Latin America is the region that prioritizes health and well-being the most, even above Europe.

“Currently some companies seem to care about their employees, however, the trend we see in the United States of ‘the great resignation’ shows us that as corporations we must become more consciously involved in ensuring the well-being and mental health of our human talent” said John Howard, VP and Country Manager of SoftServe Colombia, an Eastern European software development company.

In Colombia, for example, these Z generations and Millennials and, according to the Organizational Happiness Index of Ibero-America, only four out of 10 respondents said they felt happy with their job (42%), that is, more than half of the employees in the country feel dissatisfied in their place of employment. worked.

What is happening then, why the massive resignations?

As previously mentioned, a lack of work-life balance and decreased job satisfaction are among the main factors contributing to mass employee departures.

Natalia Jiménez, Head of Expansion South America, explained to Infobae that “it has not been measured yet, but every day we talk to companies that are already losing their talent and are looking at how to build loyalty, become flexible to avoid more massive losses of talent. It may not feel the same in some industries yet, but sooner rather than later it comes for them and it is best to prepare before facing that situation.”

Different companies have opted, then, for deeper solutions to deal with this phenomenon, among the most mentioned proposals by employees for their companies are, having a dynamic work scheme, horizontal structures and the elimination of hierarchies and alternating formats .

SoftServe, a multinational software engineering, big data and analytics company, has redirected part of its business strategy to attracting and retaining talent. The multinational directs its work wellness efforts towards people, the family, professional growth and the balance between work and personal life.

John Howard, VP and Country Manager of SoftServe Colombia, explained how they have managed to combat the tendency to quit. “We have developed a comprehensive strategy, which is not only based on economic compensation, but also on five fundamental pillars for well-being. It is important for us to take into account the emotional, physical, spiritual, relational and intellectual aspect of our talent, as they are aspects that not only contribute to the well-being and growth of people, but also to the development of their technical and soft skills.” Additionally, from the firm they recommend promoting the development of creativity and innovation of the collaborators.

Finally, companies cannot and will not be unaware that focusing on the well-being and emotional state of their employers will guarantee them more trained teams with greater motivation to work on collective projects that benefit both them and the company.