Goodbye to Roger Federer, goodbye to the majesty of tennis

Home » Sports » Goodbye to Roger Federer, goodbye to the majesty of tennis 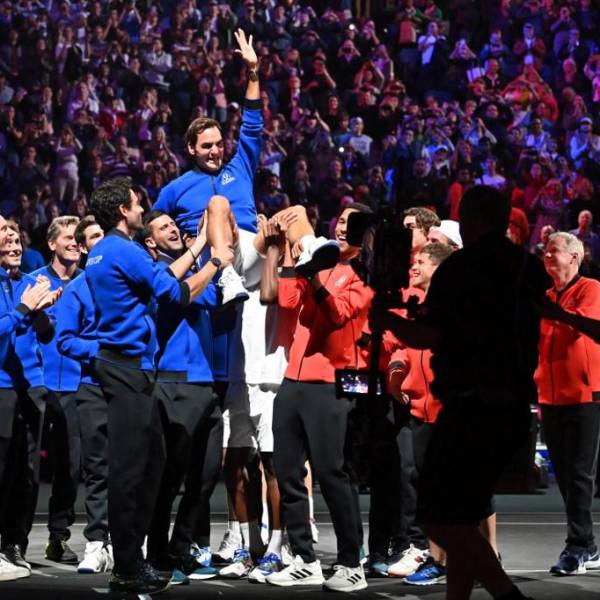 Adored by some, respected by all, Roger Federer put an end to almost 25 years of an exceptional tennis career this Saturday, with a final match alongside his great rival and friend Rafael Nadal, at the Laver Cup in London… which ended losing.

“Playing with Rafa and having all these great (players) here, all these legends… thank you!” Federer said after the match in a speech interrupted several times by tears of emotion.

He had already admitted on Thursday, at a press conference, that he did not know if he would be able to “manage all this”, when asked if he feared that emotion would overwhelm him at different key moments of this unique day.

“It has been a wonderful day. I have told the boys that I am happy, not sad,” added the 41-year-old Swiss in his speech, with the presence of his parents, his wife Mirka and their four children.

With 157 career finals, 31 of them at Grand Slams (20 titles), you might have thought that Federer had enough experience not to tense up.

But the fact that that stage fright never went away also explains the longevity and success of his career. “I could really come in every time and say ‘I hope to win this tournament’ for, I don’t know, 15 years or more. That’s been a privilege,” she acknowledged.

In this latest meeting with Nadal, who ended up losing to Americans Jack Sock and Frances Tiafoe 4-6, 7-6 (7/2), 11-9, Federer relived for the last time all those pre-match routines he loved and hated at the same time.

“I love tying my shoes, getting ready, putting the headband on (around my head), looking in the mirror (asking) ‘Is everything ok? Am I ready for this? Ok, let’s go.’ not have to do it again”, explained the Swiss before the game.

He had also recalled “butterflies in my stomach, waiting for a whole day, eating breakfast telling myself I had another big game tonight and, oh, 15 hours to wait. It’s okay, but it’s stressful and the days are endless.” “.

The last of them was surely this Friday, since the match that preceded the doubles and pitted the Australian Alex de Miñaur against the British Andy Murray lasted for two and a half endless hours.

The victory of the ocean team by 5-7, 6-3 and 10-7 placed the score 2-1 in favor of Europe against the team from the Rest of the World, which with the doubles point closed the first day of the Laver Cup with a draw 2-2.

However, despite the performance of the tennis players, the momentary champion on Friday afternoon was undoubtedly Federer, the most applauded by the London public during the presentation of the teams.

In his match with Nadal, Federer even had a service in the ‘super tie break’ to have said goodbye with a victory, although the result was the least of it.

The Spaniard, who ended up crying on the track with his friend, acknowledged that it was a “very emotional” ending. “When Roger leaves the circuit, he also leaves an important part of my life,” he said at the subsequent press conference.

“I am very proud to be part of his career in some way… But it makes me even happier to end our career as friends after everything we have shared on the track as rivals,” he added.

– “Everything has been perfect” –

His last rivals, Americans Jack Sock and Frances Tiafoe, were aware of the honor of playing this unique match, but without losing their competitive spirit either.

“Whatever happens, these guys will not be the bad guys in the movie,” their captain John McEnroe defended them before the match.

“What counts is to celebrate everything Roger has done in his career. Who wins or who loses is totally secondary,” he added.

Once the racket is hung up, the last defeat will be quickly erased with a stronger feeling in which the human, sport and history are mixed and the sadness of goodbye will not erase everything.

“We would like to play forever. I love being on the court, I love playing against these guys, I love to travel. It has never been difficult for me, whether I win or learn from losing, everything has been perfect, I have loved my career”, summarized the Helvetian in the previous one.

“Everyone has to leave the competition at some point. It has really been an adventure, tremendous. And for that, I am extremely grateful,” he concluded.

Read also  MLB.com Cy Young Poll: Who Are the Favorites?