Home » How to insure against climate change? | Economy | DW
Business

How to insure against climate change? | Economy | DW

Many people in Germany were caught by surprise by the heavy rains and deadly floods that hit parts of the country in mid-July. Now, as homeowners take stock of the damage, there might come a second surprise when reviewing their insurance policies.

Home insurance in Germany covers water damage, but not for heavy rains or natural floods. For this, the owners must have a special coverage against damages by meteorological phenomena.

These warnings, which are not unique to Germany, pose problems in a world where unpredictable weather is becoming the norm. According to the United Nations Environment Program, rising temperatures in the world can lead to increased rainfall, increasing the likelihood of floods.

Wildfires in Australia in February 2021.

“The damage that water can cause is so immense that it can ultimately spell a complete financial disaster for the person,” says Straub. “And now we see the possibility that it also affects those who have not had to deal with water before,” he adds.

The cost of this supplemental coverage varies by location and property type, Straub contends, and can range from 30% of a standard homeowners insurance policy to 300% for higher-risk properties. Currently, less than half of the insured in Germany have opted for this additional coverage.

Who should pay the bill?

Not everyone is willing to bear this cost, especially those who need it most. “Insurance becomes less attractive to high-risk households or farmers when premiums reflect latent risk,” the European Commission wrote in a 2018 report on insurance and climate change. “Although policyholders with lower risk have a weaker incentive to reduce risk, they are more likely to buy insurance as the premiums are more affordable.”

Some prefer to take risks. In the event of a natural disaster, the state can also be expected to intervene. The German government has already promised quick aid to those affected by the floods. 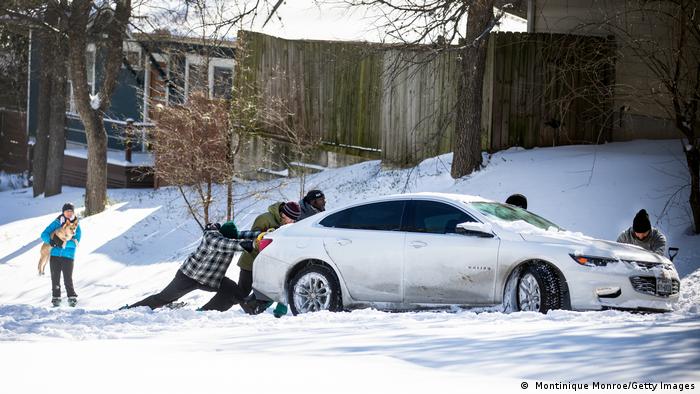 A polar cold storm occurred in Texas (USA) in February 2021.

But even with state aid, not having the right insurance could still cause problems. In Bavaria, for example, only people who can show that they tried to get coverage and did not get it can receive state aid, according to a newspaper report. Frankfurter Allgemeine Zeitung.

But is it fair to impose insurance costs on homeowners against increasingly unpredictable weather? This is the question that insurers and regulators are currently trying to answer.

A changing climate poses a technical dilemma for insurance companies, whose business model is based on their ability to quantify the risk of an event occurring and bear the cost should it occur. This means raising enough money in premiums to cover the cost of claims.

“We are in a world where risk increases day after day because there is more and more carbon in the system,” says Dickon Pinner, senior partner at global consulting firm McKinsey, on the podcast. Reimagine Insurance of the company. “So just transferring that risk is insufficient,” he stresses.

A new role for insurers

With a business model based on predictability, insurers also have an incentive to use their special role in society to guide the transition away from carbon-based energy sources.

“On a large scale, this is a massive allocation and reallocation of capital,” says Pinner. “Thinking about the price signals that insurers can send to divert capital that is currently going into risky assets that further promote risky behavior, rather than just transferring it, is really key because the rising tide of risk means that transferring does not solve the problem, “cautions Pinner. But for now, people will have to prepare as best they can for the increasingly difficult-to-predict weather.

Read Also:  Vacation and Corona: Which insurance will help me further?

My return to … History and civilization of...

Menstruation: the world of work is finally adapting

The SERBE company, in the Eure region, winner...

Paying in bitcoin with Mastercard cards would be...