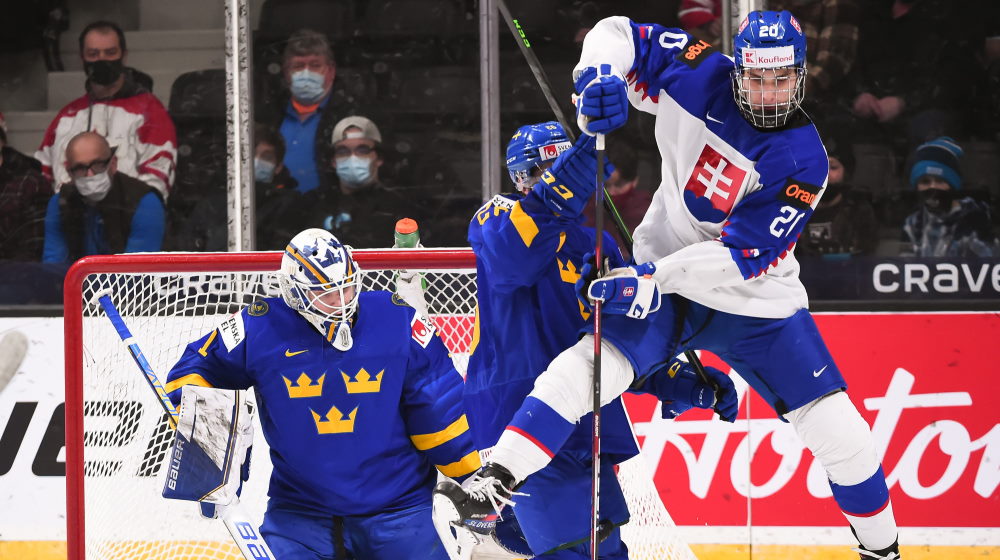 It was a game of contrasting lineups. Sweden has six returning players from the 2021 U20 and none born in 2004 while the young Slovaks, although they have eleven returnees, also  have seven 2004-born players and two born in 2005.

The game started in much the same way as last night’s games for both teams. Slovakia held the edge in play but couldn’t score while the Swedes capitalized on their first power play. The Slovaks had the territorial advantage in the opening 20 minutes, outshooting Sweden by a 13-4 margin, but more than any great save by Wallstedt it was about the Slovaks not finishing their chances.

Meanwhile, Sweden got the first power play of the game in the early going and wasted no time in scoring the crucial first goal. It came off a nice passing play from William Eklund to Helge Grans to Theodor Niederbach in the slot. Niederbach drilled a shot over the right-catching glove of Latkoczy at 6:25 for the early lead.

It was the team’s fourth power-play goal in two games and gives early indication this is their finest weapon.

“The players have been executing really well on the power play,” Monten agreed. “We just try to watch where Alex [Holtz] usually plays and the same with the others, and put them in the same spots they’re used to and try to work some easy plays to create some chemistry.”

The second period was a wide-open affair, both teams having plenty of scoring chances, but again Sweden made the most of theirs and Slovakia couldn’t find the back of the net even once. Sweden took a 2-0 lead off a brilliant individual effort from Albert Sjoberg. He beat defender Denis Bakala one-on-one at the Slovakia blue line and then fended off a check from Maxim Strbak to beat Latkoczy with an accurate shot.

But Slovakia had plenty of opportunities to get back into it among their 17 shots in the middle 20 minutes. Martin Chromiak, who scored twice yesterday, was stoned in front by Wallstedt. Simon Nemec tried a quick stuff as he went around the net, only to have the puck pushed out by Wallstedt’s right pad. And Knazko made a great move to find an opening in the slot, but his hard shot went off the shoulder of the Swedish goalie.

Slovakia had a great chance to get on the board early in the third, but Wallstedt made two quick saves, including a robbing of a sure Chromiak goal with a shot from the back side of the play. They got another chance midway through the period when video review determined Leo Loof hit Simon Nemec in the head with a high check. That necessitated a five-minute power play and sent Loof to the dressing room for the night.

Sweden’s penalty killers, however, led by Wallstedt, were excellent, but with two minutes left coach Ivan Fenes pulled Latkoczy to create a two-man advantage. The Swedes then cleared the puck over the glass, resulting in another penalty and a two-man advantage for more than a minute. Fenes pulled his goalie again to create a rare six-on-three situation, but still nary a puck found the back of the net.

Daniel Ljungman closed out the scoring with an empty netter.

It wasn’t pretty, but it got the job done. “They had a tremendous game,” Monten said of Slovakia. “I think they were better than us for almost the entire game. We had some good moments, but overall they were better. But Jesper was terrific, and if we’re going to have a chance to win this tournament, he has to be an important component for us, and he showed that today.”

“I have never seen a shutout of a goalie like this,” said Fenes. “We are seeded number eight in the tournament but we have shown in this game that we can play with a team such as Sweden.”

Both teams now have a day off. Slovakia takes on Russia in the early game on Wednesday followed by Sweden and the United States.