in Toulon, the nationalist right at the forefront of the mobilizations

Home » News » in Toulon, the nationalist right at the forefront of the mobilizations 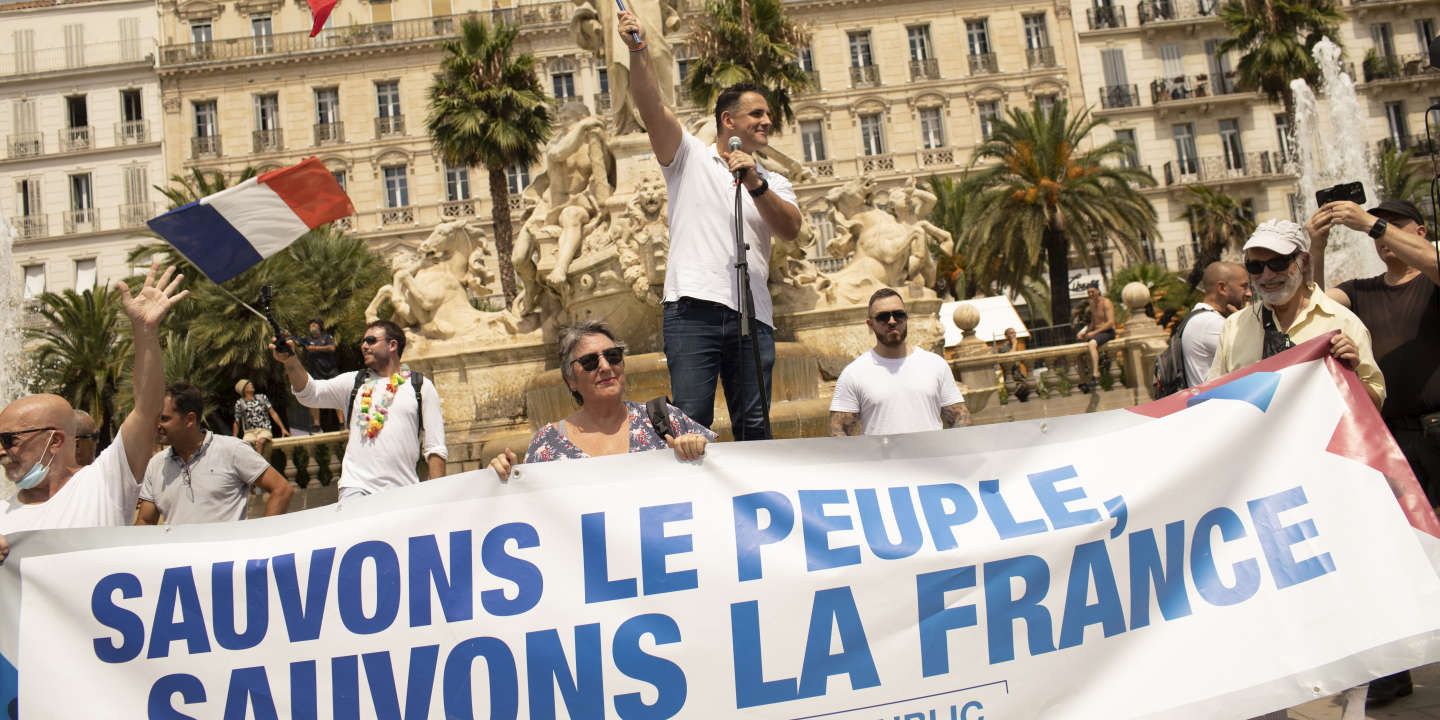 “I’ve been filming for ten minutes and it still happens! ” Phone in hand, Claude is enthusiastic. The retiree, who does not want to give his last name, stopped at Place Blache to broadcast live on social networks the parade against the health pass and compulsory vaccination which crosses Toulon this Saturday, August 7. Left shortly after 2 p.m. from the Place de la Liberté, the demonstrators have just stopped for a few minutes in front of the prefecture of Var, a symbol for them of this state which “Deprive them of their freedom”. Preceded by a procession of motorcycles, they chanted “Macron resignation” and called the gendarmes who guard the gate to join them. Then, tricolor flags in the wind, headed for the town hall, held by the very macronist Hubert Falco.

Read also At least 237,000 people demonstrated against the health pass

Are they more numerous than the previous week? Claude is sure of it. Madeleine, “Gendarme’s mother scandalized by Macron’s arrogance” that accompanies it, just as much. “And the media will still say that we were 200”, she squeaks. On July 31, the strength of the mobilization in the capital of the Var had surprised. Especially on vacation. 13,000 demonstrators, according to the daily Var Matin. A few thousand, depending on the prefecture.

On August 7, the same prefecture announced 19,000 demonstrators. Nearly 50,000 in all the cities of the South East. “I don’t know why people are more concerned here, wonders Damien Guttierez, former elected departmental National Rally (RN), now without a label. Is it the strong establishment of the “yellow vests”? From the national right? The pass affects everyone and directly impacts our daily life. People with no experience of protest feel concerned. The prospect of a vaccination extended to children under 12 irritates parents. “

On the platform of the Place de la Liberté, the municipal councilor of La Seyne-sur-Mer, a former military nurse, spoke. “France lost a battle with the enactment of this law, but she did not lose the war. Resistance! “, he yells, in front of a growing crowd. In the morning, he tried to lead a first action in front of the fort of Brégançon, where Emmanuel Macron is staying, a good half hour from Toulon. The initiative came to nothing. Perched in the hill opposite the presidential residence, Damien Guttierez was barely heard by the thirty demonstrators who were waiting for him on the beach, in the middle of the bathers. The gendarmes confiscated his megaphone and the opponent turned back.

You have 69.94% of this article left to read. The rest is for subscribers only.