Industry mood drops to record low due to corona virus 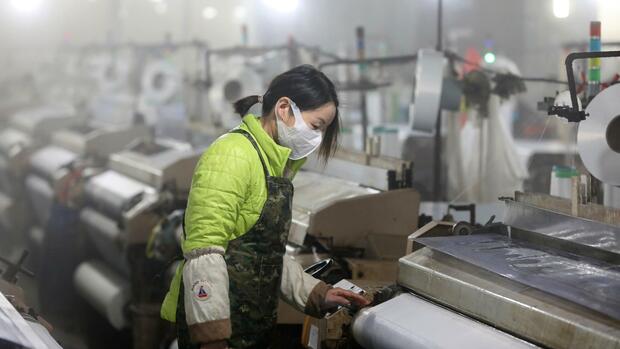 Peking China’s industry has contracted even more than expected as a result of the corona virus. The official purchasing manager index for manufacturing (PMI) fell to 35.7 points in February, as the Chinese statistics office announced on Saturday – and thus to a record low. Even during the 2008/2009 financial crisis, it hadn’t fallen that deep. In January it was still 50 points. Analysts interviewed by the Reuters news agency had expected a drop to 46 points in February.

The sharp slump shows how badly the Chinese economy has been hit by the coronavirus crisis. The state-determined index mainly reflects the assessments of large and state-owned companies and is determined monthly. A value above 50 indicates expansion, while anything below 50 indicates contraction.

“The worst PMI in China in history will shock the markets on Monday,” wrote Iris Pang, ING Bank economist for China.

The other indicators, released by the Chinese statistical office on Saturday, also look bleak. The PMI for the service sector fell to 29.6 points in February, after 54.1 points in January.

It will also be interesting on Monday when the Caixin PMI is published, an indicator that is collected by a private media company and is more focused on smaller private companies than the state-determined official PMI.

The following are the most important questions and answers on the crisis and how it affects the Chinese economy.

What is the current state of the economy in China?
The Chinese economy is suffering greatly from the crisis. For many companies, business stopped for weeks, plus the decline in consumption. Some economists expect economic growth to plummet to 3.5 percent in the first quarter. In the fourth quarter of 2019, growth was still 6 percent. The longer the crisis lasts, the more analysts lower their forecasts. The International Monetary Fund (IMF) now expects China’s economic growth to plunge 0.3 percentage points for the full year. Since the importance of Chinese economic growth has increased enormously overall in recent years, this also has an impact on global economic growth.

Which sectors are particularly affected?
In addition to industrial companies, the crisis hit companies in the catering and tourism sector particularly hard. They missed the important business around the Chinese New Year holidays because of the massive insecurity among the population. Most restaurants and hotels are now closed. And those who have opened have few customers.

Small and medium-sized enterprises in China are particularly hard hit, as they often do not have sufficient capital cushion to survive such crises. “Small and medium-sized companies are probably among the most exposed companies,” according to a recent analysis by the rating agency Fitch. Large state-owned companies that can rely on government support are better positioned, even in sectors where the impact on business could be significant.

The crisis also has an international impact: many companies see their supply chains threatened. According to a recent survey by the EU Chamber of Commerce together with the German Chamber of Commerce, all European companies doing business in China are now affected by the crisis. According to the survey of around 600 companies, almost 60 percent even see “serious” and another 30 percent “moderate” consequences for their business in China. Almost half of the total of 577 participants in the survey expect sales to decline by up to 20 percent in the first half of the year and beyond as a result of the crisis. 46 percent want to lower their full year targets.

What restrictions do companies in China currently have to deal with?
Due to the state structure, this varies greatly depending on the region. The central government in Beijing is only giving the rough direction when it comes to precautions to contain the virus. The provincial and city governments largely decide themselves which restrictions they impose.

One of the difficulties for the companies is the transportation of goods through China. Special permits must be obtained for transportation. In addition, many companies find it difficult to rule that people entering another province are initially quarantined for 14 days. EU Chamber of Commerce President Jörg Wuttke complains about a “patchwork of conflicting rules”. The travel restrictions and quarantine requirements also cause difficulties for the companies because so many employees cannot return to their workplaces.

In general, special hygiene measures must be taken everywhere, some of which are checked beforehand before the companies are allowed to resume their work. The provinces and cities specify how often the rooms have to be disinfected and how often the employees have to measure the temperature. Companies have to report regularly how often they disinfect their rooms and which employees come and go with them. In some places, meetings are completely forbidden.

What state aid is there for affected companies?
China has already taken numerous measures to bring more liquidity to the market, especially in the short term. For example, several reference interest rates have been lowered in the past weeks, banks are encouraged to issue more generous loans and to turn a blind eye when receivables are due.
However, China has not yet used the greatest leverage: the lowering of the minimum deposit requirements (“RRR”). However, it is expected and has already been announced that the Chinese central bank will lower the reserve requirements. The lower these minimum deposits are, the more liquidity the banks have available for lending – which they can then pass on to companies.
In addition, there are many provincial measures in China: For example, companies are waived social security contributions, taxes can be paid later, and there are also subsidies for research-based companies and tenants’ decrees.

How will it go on?
That depends on how long the crisis will continue and whether the restrictions in China will be maintained – and how severely the rest of the world will be affected by the virus. The top Chinese leadership has stipulated that the provincial and city governments should adjust the restrictions so that companies can return to work. According to data from the National Statistics Service, released on Saturday, 85.6 percent of large manufacturing companies have resumed work. However, experts do not give the all-clear. “It’s not as positive as it sounds,” writes engineer analyst Iris Pang. Even if Chinese factory production can recover in March, there is a risk that export orders will be small. “The reason is that the supply chain will continue to be disrupted, this time in South Korea, Japan, Europe, and the United States, where Covid-19 has started to expand,” said Pang. According to official data from the end of February, the situation is even worse for small and medium-sized companies in China. Accordingly, their production is currently only around a third.
A lot also depends on whether the situation in China is actually under control. In recent days, the number of newly infected people in China has shown a downward trend. However, the question is whether the number of newly infected people will increase again as soon as the restrictions to contain the pathogen are lifted again. “There is certainly a possibility that the number of cases will increase again if the political measures change,” says Christl Donnelly, Professor of Statistical Epidemiology at Imperial College London. Every step in this direction must therefore be monitored very carefully and carefully.

More: Read all current developments in our news blog.

French authorities today added deaths in hospitals to those seen in homes for the first time, with the total death toll being...
Read more

French authorities today added deaths in hospitals to those seen in homes for the first time, with the total death toll being...
Read more