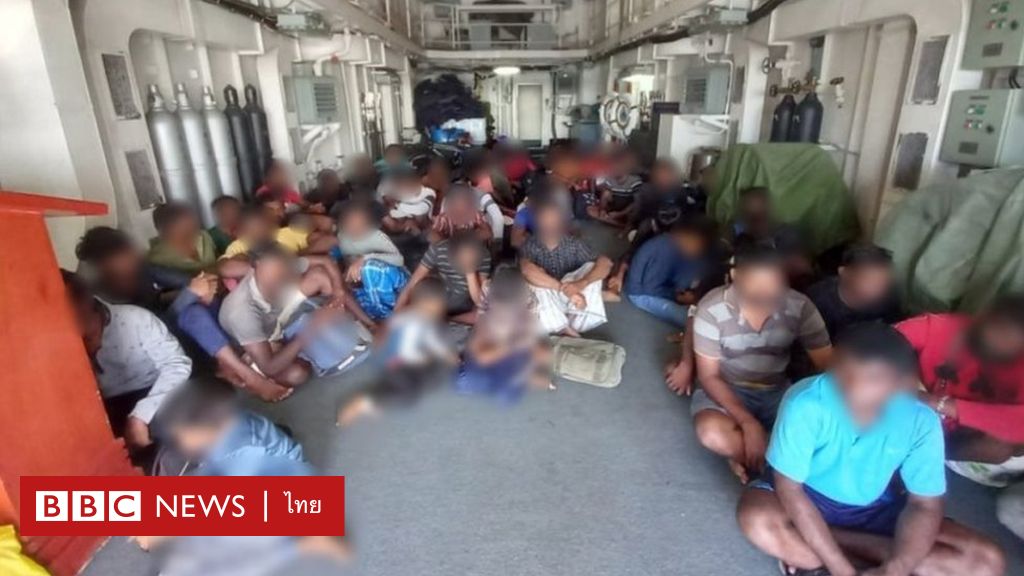 “One of us is seriously ill. But on the ship there was no medicine at all. Some people bring alcohol with them. So I chose to drink to drown my fear of death,” said Shiva, a Sri Lankan man who was smuggled into Australia by boat.

“We have been suffering for 30 years. It has put us in poverty. All these incidents made me an alcoholic,” Shiva told the BBC.

“That’s when a friend of mine asked if I wanted to take a boat trip to Australia with him,” said a father of two from Northern Sri Lanka. It said, “Five people are said to have died on the previous boat from sickness, seasickness and being overwhelmed.”

Many Tamils ​​living in the north and east of Sri Lanka suffer just as Shiva. Both physical wounds and psychological pain This was all because of the conflict that caused many losses. and efforts to find a solution

“At that time, many people came to Australia on illegal boats. It all happened through a middleman that I met through another friend. He called me one million Sri Lankan rupees (about 300,000 baht) for the whole trip. and have to pay half in advance.”

Shiva said he pledged his wife’s jewelry and borrowed money at high interest rates to pay the broker.

Negombo, a city on the west coast of Sri Lanka. It is a major source of human trafficking.

Jude, a local boat owner from Negombo, tells us he has smuggled hundreds of people to Australia and Italy over the past 30 years.

The route from Sri Lanka in the Indian Ocean to Australia is a straight line. While Italy is popular for its reputation for job opportunities, Negombo is known as “Little Rome”.

“On one occasion in the late 1990s I smuggled 130 people at once to Italy on a twin-engine boat,” Jude proudly told the BBC.

He said that cross-country smugglers are popular with rumors of immigration policy adjustments in countries like Australia to lure victims.

“If we hear that these countries are easing their immigration and refugee measures, That’s our chance,” he said.

“Food and drink will be provided on board in no time. as well as fuel.”

But Jude did not supply these passengers himself. And he doesn’t ship with the smugglers across the country either.

“These brokers are small groups of about 10-15 people spread across the country. Together they number about 50 people,” he added.

Jude said that in this business A broker is someone who earns real profits.

“At the same time We supply ship captains and 4-5 crew members to help us. We registered the ship under the name of the ship’s captain. Because there will be no return sailing or tracking. The entire crew will reach the coast with the smugglers across the country.”

This is a one way trip. Not just with the travelers but the same applies to the crew. because they looked for asylum no different.

Dreaming of a better life

But there is no guarantee that everything will go according to plan.

Shiva said brokers asked him and 60 other people on the same boat to pay the remaining 140,000 baht before they went ashore.

Even though the war is over But hundreds of Tamils ​​have been forced to disappear in northern Sri Lanka. Many human rights activists were attacked. while many journalists were killed. or disappeared during that time

The government has denied any involvement in the disappearances of these individuals.

Prior to 2009, both sides slandered each other over the issue of atrocities. However, the kidnappings continued even after the Tiger Elam was defeated.

“Even if I die on the boat People don’t appreciate anything.”

“Based on the situation after the war in Sri Lanka is over. I felt as though I had died on the boat. People don’t appreciate anything,” said Shiva.

However, having spent a few days at sea He began to miss his two children and a wife at home.

“I can’t stop thinking about them,” he recalls.

After 22 days, Shiva and the others arrived in Australian waters.

Asylum seekers caught in Australian waters trying to enter the country by boat are sent to a variety of detention facilities. This includes exports to countries like Nauru and Papua New Guinea. or sent to Christmas Island, which is located on the Indian Ocean and is under Australian rule.

Shiva said they were detained on Christmas Island until trial.

“Some detainees who spent months or even years in the camp told me that even if I was in Australia I would not be able to bring my children and my wife together. or if there is a way to bring it It would take many, many years.”

After 30 days, he and 13 other detainees were deported back to Sri Lanka due to “Their complaints are insufficiently weighted.”

According to Jude Cross-country smugglers have stopped repatriating routes to Italy for years due to high costs and regulations against asylum seekers.

“It has been easy to smuggle people to Australia in the last few years. But now it’s difficult,” he explained.

When asked if Jude felt guilty about breaking the law and profiting from people in difficult circumstances, that could mean risking their lives. Jude replied that his conscience was still clear.

“We don’t feel guilty when these people get on the boat and pay us for freedom in life. They risk their lives for a better life,” Jude said. “It doesn’t matter to the shipowners whether they get to the coast or end up in the detention camps. They know the risks of this route well before they go.”

Jude admits he feels bad to see women and children traveling in such dire conditions.

“Before, there were always men who came to us. But now families and small children are paying us more.”

“People only see what they want to see.”

instead of feeling guilty Jude insists that smugglers like him are here to help.

“If we’re smuggling 50 people, we’re usually taking two to three teenagers from nearby villages who can’t afford to pay for themselves.”

But this is not a direct path to making dreams come true.

Jude admits that weakness and lack of awareness of what the truth is that has led people to continue to turn to these smugglers. because they had no access to legal immigration

“People know us from word of mouth. They also heard about us from people who went to Australia on a boat ride, got visas and made a lot of money. which is not true But people only see what they want to see,” he said.

According to information from the Sri Lankan Navy The number of people trying to escape to Australia via boat has increased this year.

Sri Lanka Navy spokesman Captain Idica de Silva told the BBC: As of July 2022, 864 people attempted to smuggle into Australia via boat and were arrested, of which 15 were seized.

Additionally, 137 Sri Lankans who tried to smuggle into Australia were deported.

According to information from the Sri Lankan Navy Two ships to Canada in 2021 and 2022 have also been intercepted.

Captain De Silva has pointed out that no illegal boats will be caught in 2020 during the pandemic crisis.

He pointed out that brokers are there to fool the poor or the vulnerable and guide them that they can go to a rich country like Australia and have a better life.

“There is a higher number of families on boats with young children. These traffickers deceive people by saying they would benefit from human rights laws in some countries.”

A Sri Lankan Navy spokesman said the agency itself and the Australian Border Patrol were working together to arrest these illegal immigrants.

no food, no fuel no medicine

Shiva calmed down after he returned to Sri Lanka and paid off the debt he owed after starting his own business.

But then Sri Lanka’s economy was mired in a crisis of depleted international reserves. As a result, the government is unable to import enough fuel or medicines. As food prices skyrocketed.

People had to line up for kilometers at gas stations. The driver often fell asleep in the car waiting for weeks to reach his own turn.

The number of people fleeing to home country like India has soared in the wake of the economic crisis. And Shiva was thinking about his future as well.

“I miss going back to Australia. from Sri Lanka’s current situation Previously because of the war Now it’s because of the economy…it doesn’t have food. no fuel There is no medicine in this country.”

(*All names of both human traffickers and smugglers into Australia are fictitious names to hide their identity.)