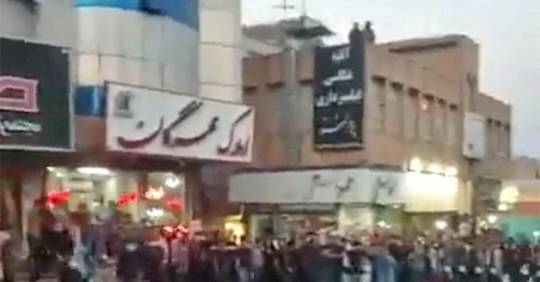 LIran’s judiciary chief on Sunday threatened to show “no leniency” to protesters after ten days of nationwide protests over the death of a young woman in the custody of vice police, which claimed the lives of 41 people.

President Ebrahim Raïssi had previously called on the security forces to act “firmly against those who undermine the security and peace of the country and the people”.

The head of the judiciary, Gholamhossein Mohseni Ejei, insisted on him on “the need to act without any indulgence” towards the instigators of the “riots”, reported the Mizan Online website.

The protests began on September 16, the day Mahsa Amini died, arrested on September 13 in Tehran for “inappropriate wearing of clothes” in the Islamic Republic where there is a strict dress code for women.

These demonstrations are the largest in Iran since those of November 2019, caused by the rise in gasoline prices, in the midst of the economic crisis, which had affected a hundred cities and had been severely repressed (230 dead according to an official report, more than 300 according to Amnesty International).

They are marked by clashes with the security forces and by slogans hostile to power, according to media and activists. For several days, online videos have shown scenes of violence in Tehran and other major cities such as Tabriz (northwest). On some, we see the security forces shooting in the direction of the demonstrators.

Footage released on Saturday shows protesters destroying a portrait of Ayatollah Khomeini, founder of the Islamic Republic, in front of the Noshirvani University of Technology in Babol, in the province of Mazandaran (north).

Read also  FUT 23: The Web App is coming out this Wednesday!

The authorities deny any involvement in the death of Mahsa Amini, 22 and from the Kurdistan region (northwest). But since then, angry Iranians have taken to the streets every day at nightfall to demonstrate.

On Sunday, Iranian Foreign Minister Hossein Amir-Abdollahian again implicated the United States, a sworn enemy of Tehran, in the unrest, accusing Washington of “interfering in Iranian affairs (…) and support the rioters in a provocative way”.

Since the beginning of the demonstrations, more than 700 people have been arrested in a single northern province which has communicated on the arrests, but undoubtedly many more in the whole country.

According to a non-detailed official Iranian report, including demonstrators and law enforcement, 41 people were killed in ten days of protests. But the toll could be heavier, with the Oslo-based NGO Iran Human Rights (IHR) reporting at least 57 protesters killed.

On Sunday evening, angry demonstrations resumed for the tenth consecutive evening in several cities, including Shiraz (center) and Tehran, according to the IHR. “Death to the dictator!” Chanted protesters in the capital, according to a video posted by the NGO on Twitter.

Earlier in the day, demonstrations in favor of the government were organized in the capital and elsewhere in the country at the call of the authorities. Another pro-government demonstration was organized on Friday.

“We must put an end to these riots because they are damaging the country,” Nafiseh, a 28-year-old Iranian woman participating in the demonstration Sunday in Tehran, told AFP.

“Removing the hijab is violating the Constitution of the Islamic Republic,” said Atiyeh, a 21-year-old academic.

The reformist “People’s Union of Islamic Iran” party called on the state to cancel the compulsory veiling and release those arrested.

In Iran, women must cover their hair and body to below the knees and must not wear tight pants or ripped jeans, among other things.

Internet connections are still disrupted on Sunday, with the blocking of WhatsApp and Instagram. NetBlocks, a London-based site that monitors internet blockages around the world, also reported on Skype.

A measure described Sunday as a “flagrant violation of freedom of expression” by the head of European diplomacy Josep Borrell, who denounced the “widespread and disproportionate use of force” against the demonstrators.

In a new Instagram post, two-time Oscar-winning Iranian director Asghar Farhadi urged the people of the world to “stand in solidarity” with protesters in Iran and hailed the “brave women who are leading the protests to demand their rights.”

Abroad, demonstrations supporting the movement in Iran took place in several countries on Saturday and Sunday. In Paris, police used tear gas to prevent thousands from reaching the Islamic Republic embassy, ​​while in London five protesters were arrested for ‘throwing projectiles at officers’ near the Iranian embassy.