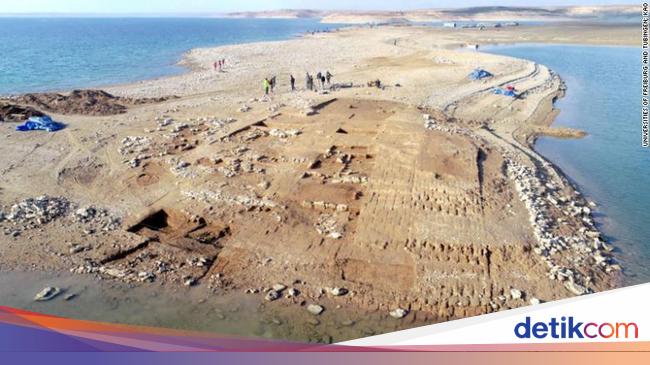 The extreme drought reveals a surprising thing. A city that is 3,400 years old emerged after the reservoir water level dropped.

Collect CNN, German archaeologist Ivana Puljiz rushed to excavate the site after hearing of its appearance. Because it is not known when the water level will rise again.

The excavations were carried out along the Tigris River, in the Kurdistan region of northern Iraq. The project collaborates with Kurdish archeology and the Directorate of Antiquities and Heritage in Duhok to preserve the culture of the area.

“Due to the immense time pressure, we are digging in freezing temperatures, snow, sleet, rain, even storms, and sometimes sunny days, not knowing when the water will rise again and how much time we have,” said Pujliz. .

Kemune or the sunken ancient city of Zakhiku is believed to be a bronze age city, a major center of the Mittani Empire which ruled from 1550 to 1350 BC. Zakhiku sank underwater after the Iraqi government built the Mosul Dam in the 1980s and has rarely been seen since.

Most structures are made of sun-dried mud bricks, which usually don’t hold up well underwater. Zakhiku was hit by an earthquake around 1350 BC and part of the upper wall collapsed and covered the building.

Meanwhile, information about the ancient Mittani people who built the city is scanty. Researchers have yet to identify the imperial capital or find their archives.

However, the archaeologists conducting the study found five ceramic vessels that held more than 100 cuneiform tablets. The objects are believed to be from the Middle Assyrian period which lasted from 1350-1100 BC.

Uniquely, cuneiform tablets made of clay that are not burned can still survive for decades under water. Although it has not been described Puljiz hypothesizes that the object belongs to a private archive.

“I’m curious next to see what the study of cuneiform texts will reveal about the fate of the city and its inhabitants after the devastating earthquake,” he said.

Before the city disappeared again underwater, the researchers covered it with a plastic sheet tied together with stones and gravel. Puljiz hopes these measures will protect the ancient site from water erosion and prevent it from disappearing.