It is false that sparkling water, coconut, cucumber or shampoo affect health during menstruation

Home » Health » It is false that sparkling water, coconut, cucumber or shampoo affect health during menstruation 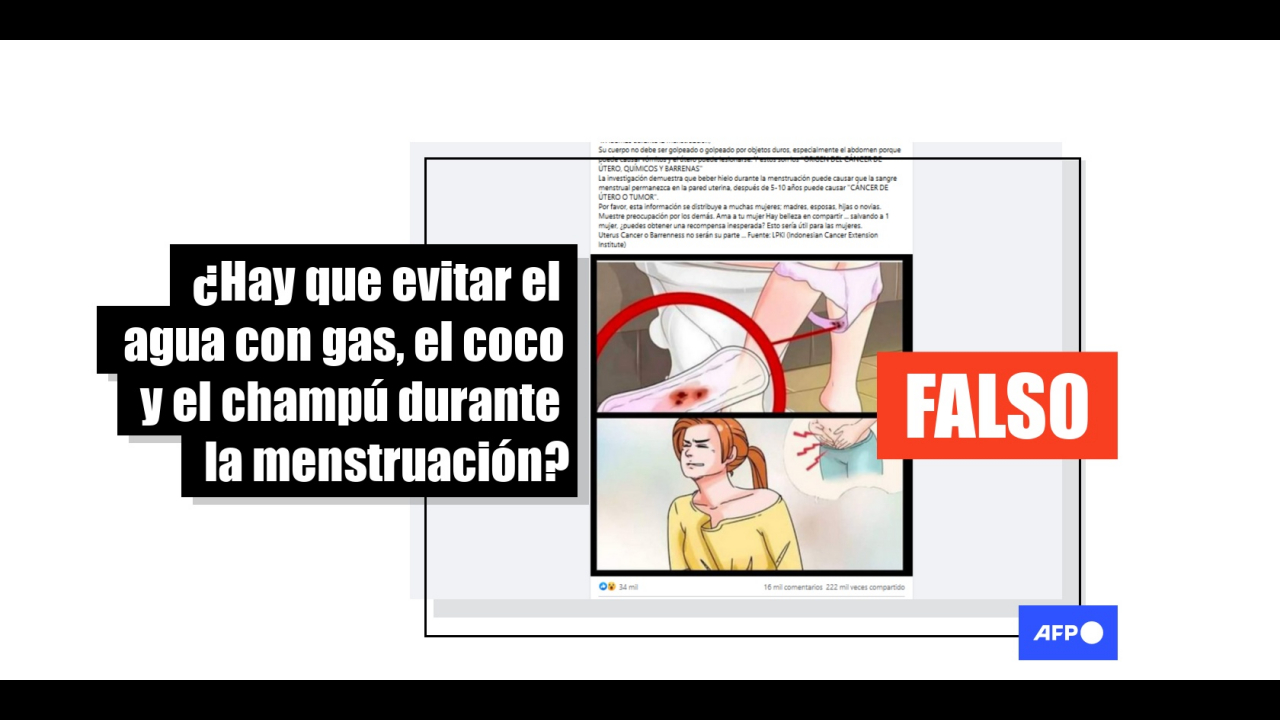 Posts shared more than 250,000 times on social networks since mid-2018 assure that women can lose fertility, develop cancer and suffer serious headaches if they consume sparkling water, ice water, coconut, cucumber, or if they wash their hair with shampoo during menstruation. However, none of these recommendations is supported, as confirmed by several specialists consulted.

“#ATENCION_MUJERES TAKE VERY CAREFUL” notices a text shared on Facebook (1, 2, 3) that lists different foods that women should not consume during menstruation, or activities that they should not do, as they would affect their health.

According to publications, applying shampoo to the head during menstruation can trigger “A dangerous” headache. Nor should cucumber be consumed, since “Can cause sterility” and avoid abdominal blows or drink ice water, because they could lead to uterine cancer.

The publications cite the “Indonesian Cancer Extension Institute” as the source of the information. AFP Factual found on Facebook two pages in Indonesian with that name, whose last publications date from November 2015 and June 2017. However, there is no trace that these accounts published the viral recommendations.

“None of these advice is valid, nor does it serve or have a scientific basis”Silvina Kiss, who is a member of the Forensic Medical Corps of Argentina, told AFP Factual.

With her coincided the French gynecologist and obstetrician Odile Bagot, author of the book “Vagin & Cie, on vous dit tout!” (Vagina and company, we tell them everything): “There is no study that confirms anything that is said in the publication.”

Kiss recalled a myth similar to that of viral posts: “About 40 years ago it was said that you did not have to bathe because your menstruation would ‘cut’. If it were that easy, to treat a hemorrhage or when menstruation is very abundant, instead of prescribing hormones we would prescribe a bath ”.

Without specifying what would be the supposed effects that it entails, the viral publication urges not to consume ice or carbonated water during menstruation.

“Cold or sparkling water has never had any effect on the body and even less on the genital system”Bagot pointed out.

The gynecologist Anaïs Reyes Navarro, a member of Doctoralia, an international platform of medical specialists, agreed with her: “It does not have to do one thing with the other. Ingesting ice or sparkling water or not does not alter the hormonal cycle or predispose to any cause of disease related to the female reproductive system “he told AFP.

According to viral recommendations, the shampoo can cause dangerous headaches, as it “The pores of the head are open during menstruation.”

The “catamenial headaches [o menstruales, NDLR] they do exist, but they are linked to a sudden drop in estrogen. It has absolutely nothing to do with the ‘pores on the head’ “Bagot commented.

“Blood accumulated in the uterine wall”

The idea that “blood” menstrual could be “blocked up” O “accrue” in the uterine wall “corresponds to a fantasy about the mechanism of menstruation”, Bagot detailed.

“The menstrual period is the fall of the endometrium, that carpet that covers the inside of the uterus. It thickens during the cycle until it reaches a thickness that does not reach a centimeter and, if there is no pregnancy, it falls off “, specific.

“The function of the endometrium is to prepare each month to nest the embryo of pregnancy”gynecologist Kiss told AFP. “In the second half of the cycle, the endometrial cells thicken. If there is no pregnancy, the body discards the tissue, it sloughs off, and that leads to menstruation. It is not that blood ‘accumulates’ and then falls ”.

The specialist ruled out that the cucumber or ice had any kind of incidence or consequence in the process, as the viral publication suggests.

According to posts on Facebook, avoid hitting hard objects on the abdomen, which can cause vomiting, injure the uterus and lead to cancer.

“The uterus, to begin with, is not in the abdomen, it is in the pelvic cavity”, explicó Kiss. “It measures seven centimeters, it is very small, with which an abdominal trauma can injure abdominal organs and viscera but not the uterus, which is quite protected in the pelvis.”

Dr. Bagot agrees with her: “The uterus cannot be injured; when you stand up, it is behind the bladder and intestines “she explained, adding that vomiting during menstruation “They can occur in women who have very painful periods.”

“Cancer of the uterus” and “sterility”

Reyes Navarro told AFP that it is imprecise to use the word “sterility” to refer to the impossibility of a woman to get pregnant since the word refers to something that is clean, free of bacteria or germs.

“The correct expression is infertility, which means that, for a year, the same couple, with a regular sexual life, had unprotected relationships, and did not get pregnant”added.

According to the Institute of Children’s Health of the United States, female infertility can be attributed, among other causes, to ovulation failure, problems in the menstrual cycle, physical abnormalities in the reproductive system, infections, autoimmune diseases and cancer.

The Office for Women’s Health in the same country indicates that “The factors that increase the risk of infertility in women” They include age, smoking, drinking a lot of alcohol, stress, excessive athletic training, being overweight, and having sexually transmitted diseases.

Reyes Navarro also pointed out that it is imprecise to speak of a “uterine cancer”. Two different types of cancer usually occur in this area of ​​the female reproductive system: endometrial and cervical, and it can occur in patients of different ages.

Although the causes of endometrial cancer are unknown, risk factors include obesity and hormonal imbalance, according to the American Cancer Society.

The Spanish Association Against Cancer indicates that cervical or cervical cancer is the second most common in women worldwide, after breast cancer.

The Pan American Health Organization (PAOH) indicates that the human papillomavirus (HPV) is the leading cause of cervical cancer. The Pap smear is the test that women should have regularly to find out, among other things, whether or not they are carriers of the virus.