‘La Familia’ receives the affection of the fans

Home » Entertainment » ‘La Familia’ receives the affection of the fans 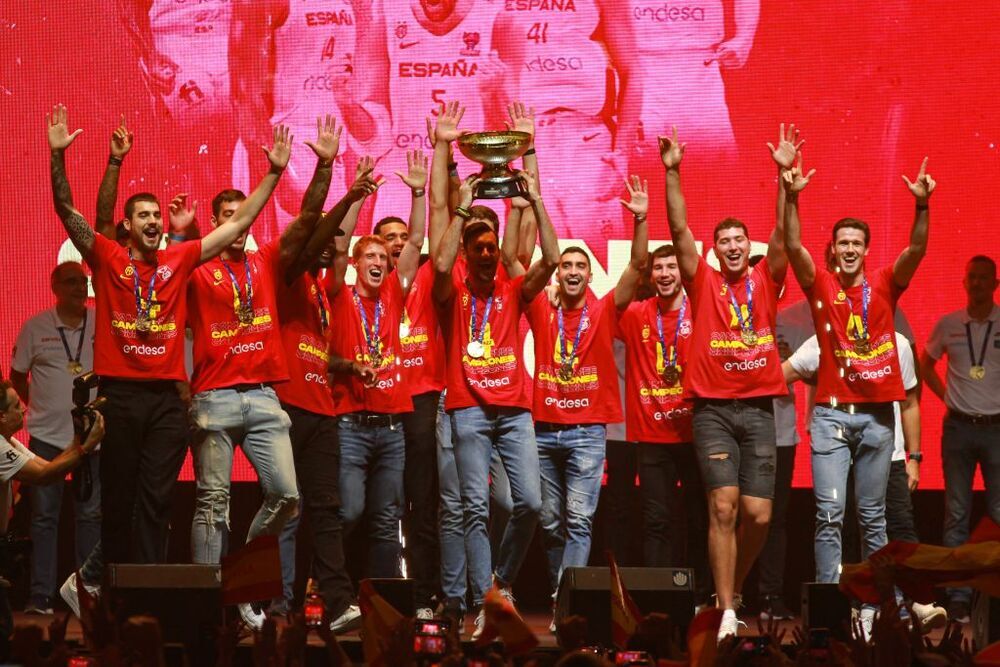 The Spanish men’s basketball team was entertained this Monday by more than 10,000 fans who attended the WiZink Center in Madrid to celebrate with them the conquest of the fourth title of European champions.

The Madrid venue registered an almost full house to offer its affection to the 12 internationals and the coaching staff of the national team, who were able to celebrate the achievement of a somewhat unexpected gold medal. The fans packed the WiZink track and stands well before the European champions arrived at around 8:00 p.m. to star in a party that lasted just over an hour.

After the presentation of all the ‘staff’ of the Spanish team and the players, the coach Sergio Scariolo was the first to speak to address those present. “Thank you very much, once again we are all European champions,” said the Italian, with a smiling face that could hardly be seen during the Eurobasket.

In addition, the one from Brescia used a cinematographic simile to talk about the title of his team. “Do you remember the Will Smith movie ‘The Pursuit of Happyness’? When he says to his son ‘Don’t let anyone tell you that you can’t do something, if you want something, go for it,'” he remarked. Scariolo before the applause of the public.

Captain Rudy Fernández also gave “thank you very much for the support” and remembered those of the “white polo”, in relation to the rest of the coaching staff and the expedition because “much of this trophy is thanks to their work”.

However, he was very affectionate with the coach, whom he thanked. “We have been together for many years, we have won four European gold medals and we have lived through everything, but what you have done with this team is incredible,” he confessed, later thanking each of his teammates for making him “believe” that they could “achieve it.” ” and that he enjoyed “as if he were a 21-year-old boy”.

Among his praises were Willy Hernangómez for being “a hell of a guy” and deserving the Eurobasket ‘MVP’, Lorenzo Brown for his “sacrifice and commitment” or Xabi López-Arostegi for being “one of those who always” wants on your team. “Alberto! Please, how do you defend!”, He indicated to the Unicaja base, key with his defensive actions.

Willy Hernangómez, encouraged by the cry of ‘MVP’, wanted to remember “all the people who have been in the ‘windows’ and who are part of this team” and was “very happy to be part of this group”. “Above all, I want to thank Sergio for everything he has squeezed out of me and the fights that have fallen on me, and the ones that remain,” the pivot remarked about the coach.

Lorenzo Brown, also highly applauded, tried without much success with the Spaniard, and Juancho Hernangómez, star in the final against France, recalled, with his voice already very ‘touched’, that he told Jaime Fernández to be “calm because they are going all come in.” “Sometimes life seems like a movie, but this is better, this is real,” he assured in relation to his leading role in Adam Sandler’s “Claw.”

Read also  Macron is here for the Queen's funeral. And suddenly such a surprise

Jaime Fernández highlighted what has been “a summer madness”, Darío Brizuela did not hide that he has “friends for life” as his companions and Sebas Saiz, the one who had the least participation in the tournament, stated that they are European champions ” when people didn’t believe in it. Neil Diamond’s ‘Sweet Caroline’ was in charge of closing the party at the WiZink Center.