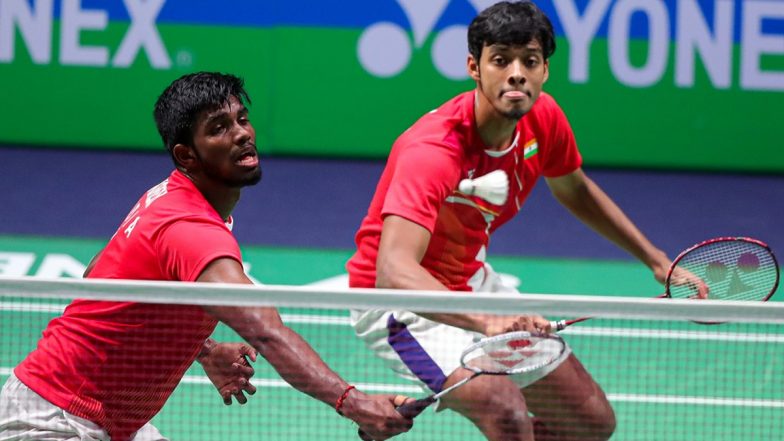 Kuala Lumpur [Malaysia]: Indian ace pair Satwiksairaj Rankireddy and Chirag Shetty crashed out of the men’s doubles semifinals of the Malaysia Open 2023 at the Axiata Arena in Kuala Lumpur on Saturday. The World No 5 duo were defeated by the Chinese pair of Liang Wei Keng and Wang Chang 16-21, 21-11, 15-21. Both teams had strong opening exchanges. However, Liang Wei Keng and Wang Chang broke away with two straight points after the first game was poised at 14-14 and then extended the advantage to go up 1-0 in the semifinals. Latest Men’s Singles BWF Rankings: HS Prannoy Reclaims Career-Best Eighth Spot After Four Years.

Satwiksairaj Rankireddy and Chirag Shetty, the men’s doubles champions in the Commonwealth Games 2022, used an offensive approach to make a comeback in the second game, forcing a decider. While the second game was won by Satwiksairaj Rankireddy and Chirag Shetty without breaking a sweat, the third game saw fierce competition. Even though they played lengthy rallies, including a 29-shot exchange to take the third point, the Indian badminton players trailed Liang Wei Keng and Wang Chang 11-9, midway through the third set.

With quick returns following the break, the Chinese pair halted India’s challenge in the BWF Super 1000 competition by improving their two-point lead over the bronze medalists from the world championship. Even though they were behind 17-10 in the second game after dropping the first one in the quarterfinals, the Indian team had overcome Liu Yu Chen and Ou Xuan Yi of China. They were unable to replicate that performance in the semis. Indonesians Muhammad Shohibul Fikri and Bagas Maulana, the current All England Open champions, were defeated by Rankireddy and Shetty in the round of 16. HS Prannoy, PV Sindhu To Lead Indian Team in Badminton Asia Mixed Team Championships 2023.

Satwiksairaj Rankireddy and Chirag Shetty’s team was India’s only hope at the Malaysia Open. Olympic medalists Saina Nehwal, PV Sindhu, and other Indian shuttlers including Lakshya Sen and Kidambi Srikanth had already crashed out of the competition. The India Open BWF Super 750 competition, which begins next week, will be the next opportunity to see Indian badminton players in action.