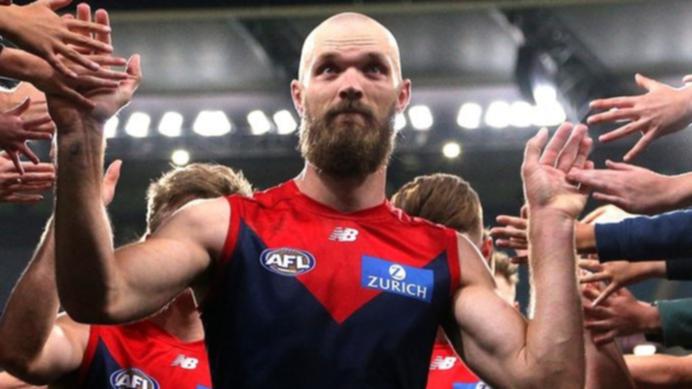 Gawn, 30, has overcome knee concerns and will return to Optus Stadium with the Demons for their first game since claiming the 2021 premiership in Perth.

Goodwin confirmed on Thursday that Gawn was training fully and that, despite taking on the bottom-placed Eagles, the club was “not in the process of resting players”.

“If there’s any player that has got an injury we won’t play them. But that’s not the case,” Goodwin said.

“We want to build our cohesion and connection with our footy team, we want to play our best players and Max is a big part of that. We want to head to Perth with our best team possible.”

West Coast’s decimated ruck stocks could receive a timely boost this week, with Bailey Williams shaping up to be available for the clash after missing two weeks with a hamstring strain and Luke Strnadica set to exit COVID protocols.

In the absence of first-choice ruckman Nic Naitanui (knee), Williams and Strnadica, West Coast were forced to rely on key defender Harry Edwards and development player Callum Jamieson to shoulder the ruck load against Brisbane.

Eagles defender Liam Duggan said he hoped Jamieson would earn another opportunity after holding his own against the more experienced Lions pair in Oscar McInerney and Darcy Fort.

“He was one of the shining lights from the weekend. His enthusiasm to get into the contest was really great,” Duggan said.

“If he gets another opportunity to show what he’s got and improve that’s a great thing for our club.”

But facing the best in the competition in Gawn and his star protege in Luke Jackson could be prove a much larger challenge without a full-time ruckman.

The five-time All-Australian kicked five goals in the preliminary final before taking a backseat role against the Western Bulldogs in the premiership decider, letting his apprentice take the wheel.

Just four days shy of his 21st birthday, Jackson played an instrumental role to turn the momentum in Melbourne’s favour during the critical third quarter of the grand final, when the Bulldogs had pulled ahead.

Jackson, who is a year younger than Jamieson, boats 35 more opportunities at top level than the Eagles two-gamer, who played his debut match as a full back in West Coast’s clash with North Melbourne in round two.