During the first confinement, the dancer and dance teacher Noëllie Coutisson had offered you on DALP many dance lessons live on video, to continue training during this period so strange. Noëllie Coutisson then continued her dance videos, offering a rich Youtube channel with many videos of bars and exercises. With the dance pianist Nolwenn Collet, she is launching a nice project for the summer: Floor Barre in Biarritz. The idea? 15 ground bar exercises filmed in Biarritz, as close as possible to the ocean and the superb nature of the Basque coast, on music composed for the occasion by Nolwenn Collet. And for each purchase (24.90 euros for the music album and the exercise video), two euros are donated to the Te mana o te moana association, which works to save sea turtles in French Polynesia. A great project allowing both to train, to get away from it all and to support a great cause. For DALP, Noëllie Coutisson and Nolwenn Collet explain to us “Floor Barre in Biarritz” and their pretty artistic complicity.

Noëllie Coutisson, before setting up “Floor Barre in Biarritz”, you launched a Youtube channel for a year. Why did you want to make course videos?

Noëllie Coutisson – Everything came with the health crisis, even though I had already thought about it before but time had run out. From the first confinement, I wanted to make videos for my students very quickly, without necessarily taking care of the form. The image quality was also bad, but it should only be for my students. Then my mom, also a dance teacher, asked me if she could use them for her students, and I finally put these videos online for anyone who wanted them. The ideas then came and it took up my time during the lockdown as well – at that point we hadn’t started classes through Zoom yet, we all thought the crisis would only last a few weeks.

And you Nolwenn Collet, how did “Floor Barre in Biarritz” end up in your confinement?

Nolwenn Collet – I have been a freelance musician in Ireland for over 13 years. As a pianist-accompanist, I was immediately excluded from online dance lessons, it was far too complicated. I ended up with nothing … and it gave me time for projects. When I arrived in Ireland, I realized that the place of the pianist in dance class was very weak: there were very few and they only played for the exams, without any creation and improvisation work. The majority of structures are private dance schools which do not necessarily have the means to have a pianist. So I started making dance CDs, I have 15 now. At the time of the first confinement, I wanted to find a new partner. I looked on social media and Noëllie’s work immediately jumped out at me : it was serious, well done, structured and you could feel both the dancer and the teacher. His videos were for dance students as well as adult amateurs, which I appreciated. I watched his videos and did his floor bars which are really great. This practice hardly exists in Ireland and it made me want to compose for this type of course, which I had never done before. So I contacted Noëllie in March-April 2020, at the very start of confinement.

How did the concept of “Floor Barre in Biarritz”, a music album and a floor barre class filmed outdoors in Biarritz, come about?

Nolwenn Collet – I submitted some ideas to Noëllie. While chatting together, I told her that she lived in a beautiful place: Biarritz. I thus had the idea of ​​making a beautiful artistic project, in homage to this city, where we take the time to write for dance, adults and students. I know Biarritz well, I come there often. And I already wrote a song about this town in my album Attitude, A Night in Biarritz. I was on the beach, in the evening, I had a drink … There was this heat coming from the ocean, this magic, it had inspired me enormously. And I have also always loved the sea, several of my albums are inspired by it.

Noëllie Coutisson – At the beginning, we had thought of filming in emblematic places of the city: the Gare du Midi, the aquarium, etc. But the various confinements have been there, with in particular the impossibility of filming indoors. And then we thought that filming outdoors would be great, especially since it is something that is not done for videos of dance lessons. 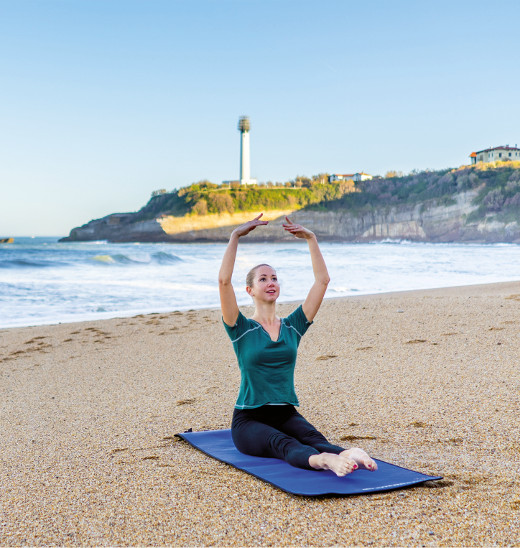 Concretely, what does “Floor Barre in Biarritz” consist of?

Noëllie Coutisson – For 24.90 euros, the pupil buys a CD and MP3 of 33 minutes of music, containing the link to the video which lasts one hour, on this same music. In the video I propose 15 floor barre exercises, a real lesson. Each time, I explain the exercise in detail, then I do it all over again. The idea is therefore to learn the exercises well, to review them several times, and the student can then chain them together, using only music, for example. We are particularly targeting amateur adults, even those unfamiliar with the bar on the floor. But the video can be of interest to any student who wants to progress.

Where and how did you film finally?

Noëllie Coutisson – We filmed the 15 exercises over one day, from sunrise to sunset. We landed at the bottom of the port of Biarritz, at the Miramar beach to see the lighthouse, at the Grande Plage, aux crampottes, the Côtes des Basques … We made a whole trip along the coast. We shot in November, I found it interesting to film out of season. The colors are magnificent, there was no one on the beach, especially since we were confined again at that time. Even if we see the surfers who were allowed to train! During an exercise, we also see a surfer warming up behind me. Filming outdoors is more complicated than indoors. Just to have the authorizations, you had to know our shooting dates … But it depends on the weather, the good weather, that there are pretty colors! The services of the city of Biarritz were, however, very efficient.

All the video is filmed by a professional cameraman, I wanted to suggest real quality work. The one we had chosen had never filmed for the dance, he was not a dancer. But he understood our project: it was not just that I was seen dancing, there also had to be a whole atmosphere with the sea. We then did a lot of editing, especially to have a good sound at the level. of my voice.

Nolwenn, you spoke earlier about your inspirations. What inspired you for this music?

Nolwenn Collet – I created this music only for this ground bar video. I was inspired by the ocean, the place, the city’s past in the great era, also of all these foreigners who can pass there, the crowd, the carefree vacation … A song is also inspired by my deceased grandfather, who came from Sicily, and who therefore had a special relationship with the sea.

This is the first time that I have composed music for a floor barre class. I felt freer there in style as for a classical dance class. And the discipline also has special needs musically speaking. In a floor barre class, the deep muscles are used almost all the time, which is not always the case in ballet exercises where you need air and rebound, as in the big one. allegro for example. For the floor bar, there is the need to feel the support of the deep muscles at all times. And in music, you have to give this dimension, which was new to me. And then the exercises are sometimes long, in repetition, but the music cannot be: on the contrary, you have to carry the dancers until the end of the exercise.

How did the collaboration between the dance teacher and the pianist come about? Was the music created for the exercises or the other way around?

Noëllie Coutisson – At the beginning, I would tell Nolwenn what I wanted for the atmosphere for a particular exercise, or the structure when I wanted something very special. But for some exercises, I didn’t know what to do yet. So I asked Nolwenn to offer me something and I built my exercise from his creations. I also like to be inspired by music to create my exercises. And Nolwenn’s proposals appealed to me every time!

Nolwenn Collet – I really like, in Noëllie’s exercises, his way of changing dynamics, of combining different movements. What must feel in the music. Writing music for something very choreographed is always great. The more constraints we have, the more interesting and creative it becomes! When I recorded the music, Noëllie had therefore not filmed her exercises, I had to imagine them. She had shown me everything and I also made this bar on the floor to feel it in my body. When we play for dance, we need our dancers. When we record a CD, we no longer have our dancers in front of us. It is therefore necessary to have like a second partition in the head, to have the dance in the head to breathe with it. As I recorded the music of the abs exercise, I felt it in my body (laughs). 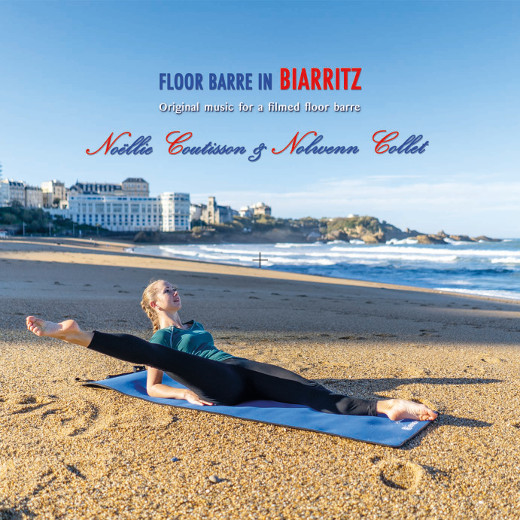 For each purchase of the “Floor Barre in Biarritz” video, two euros are donated to the Te mana o te moana association, which works to save sea turtles in French Polynesia. Why this urge?

Read Also:  Are Kylie Jenner and Travis Scott making up?

Nolwenn Collet – This association is very isolated, a symbol of the isolation we have experienced. It protects sea turtles, a symbol of longevity. And for the record, I saved a sea turtle in New Caledonia, where I spent all my childhood. We need to make the link with our planet, also as an artist to have this message, to be engaged and to share.

Do you have other projects together?

And what are your plans for this return to school, after months of intermittent classes?

Noëllie Coutisson – It is still difficult to project. I am resuming my lessons at the Maurice Ravel Bayonne Côte Basque Conservatory and in my association where I give my adult lessons. Some of my students take the national CND competition on All Saints’ Day after good results in regional this year. And we will be working with Nolwenn on our second project.

Nolwenn Collet – Dancing is now part of primary school learning in Ireland. So I set up a project to help teachers recognize the different dances: polonaise, waltz, foxtrot, etc. We have masterclasses this summer with teachers to jointly create tools to make it easier to teach these dances. This tool can also be used by dance teachers who want to broaden their knowledge. 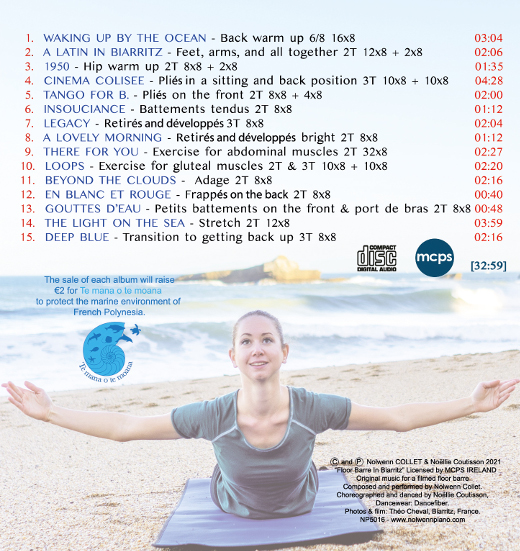 Noëllie is in Biarritz, Nolwenn is in Ireland … Did you manage to meet during this project?

Nolwenn Collet – Yes ! (laughs). I had to check in in Toulouse, then my plane was changed and the airline took me through … Biarritz. So we took advantage! When I met Noëllie, I felt like I had known her forever. We had worked together and exchanged so much! Our day together was amazing.

Opinion: who is more anti-competitive – Alphabet or Apple?

M. Night Shyamalan is there or does he?...

Almodóvar and Chilean Larraín, among the filmmakers in...

Back in the neighborhood: what happened to the...