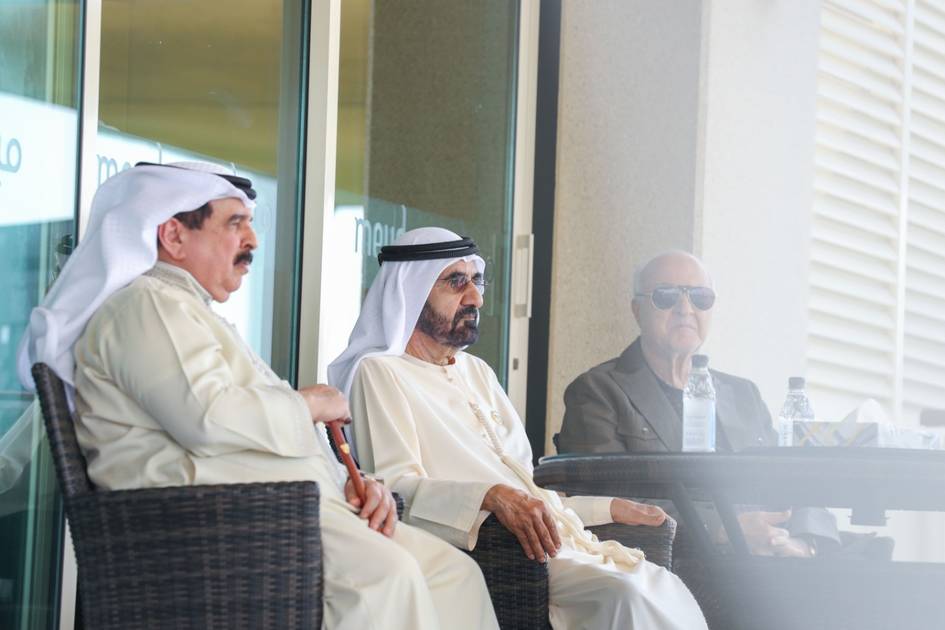 His Highness Sheikh Mohammed bin Rashid Al Maktoum, through his account on Twitter, published pictures of him with King Hamad bin Isa, and wrote: “With the King of Bahrain today … the brother and friend King Hamad bin Isa, may God protect him, fifty years of personal relationship .. And diplomacy.. and family.. Omar and ten.. Years only increase his friendship value.”

During the meeting, cordial conversations were exchanged about supporting equestrian sport in general and endurance sport in particular, which contributes to the development and progress of its races locally, Arab and globally, and raises the efficiency of jockeys and horses’ readiness for international competitions.

The race was attended by Sheikh Rashid bin Dalmouk Al Maktoum, Chairman of the Dubai Equestrian Club, and Sheikh Nasser bin Hamad Al Khalifa, representative of the King of Bahrain for Humanitarian Works and Youth Affairs.

The fourth main race, “Mohammed bin Rashid Al Maktoum Endurance Cup”, was held for a distance of 160 km, with the participation of 153 male and female riders, and the jockey Abdullah Ghanem Al-Marri was crowned a champion on the “Castlebar Corsair” horse owned by F3 stables, and covered the distance in a time of 6:29:53 hours. After an exciting competition with the Argentine jockey Catalina Bastons, who came second on the “Chasan de Sumant” horse of Jumeirah Stables, and recorded 6:29:57 hours, and the jockey Rashid Ahmed Al Ketbi came third on the “At Daniel Ring Tex” owned by M7 stables with a time of 6: 30:03 hours.

Major General Mohammed Issa Al-Adb, a member of the Dubai Equestrian Club’s board of directors, general manager of the club and head of the organizational team, expressed his happiness with the impressive organizational success of the race and its exit in line with the standing of the Arab Knight, His Highness Sheikh Mohammed bin Rashid Al Maktoum.

Race champion Abdullah Ghanem Al-Marri said: “My pride is indescribable, especially since the cup bears the name of His Highness Sheikh Mohammed bin Rashid Al Maktoum, the first supporter of the sport of endurance, and whom I have the honor to gift the law.

“The race was distinguished by strong competition, which is reflected in the times of the participants,” he added.