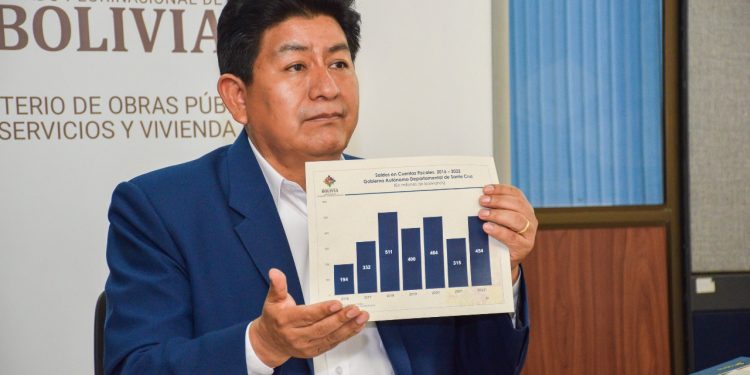 The Minister of Public Works, Edgar Montaño, at a press conference.

La Paz, September 21, 2022 (ABI). – The administration of the governor of Santa Cruz, Fernando Camacho, drags a debt of more than Bs 7 million by counterpart for the construction of roads and, despite having economic resources in cash and banks, they seek external credit, informed the Minister of Works Public, Services and Housing, Edgar Montaño.

“For us to certify, they have to have supporting documentation that they are able to pay (the loan), but those requirements have not been met, to date we are still waiting, since last year we have sent note after note,” he replied regarding the breach in the procedures to access foreign credit.

However, and according to official data, the Government of Santa Cruz has Bs 354 million paralyzed in cash and banks.

“They have money and, simply, they are using pretexts,” said Montaño, alluding to Camacho’s management without works.

The Minister of the Presidency, María Nela Prada, questioned Camacho’s lack of management on Tuesday.

Montaño added that the departmental administration drags a millionaire debt by counterpart with the State in the construction of highways that amounts to more than Bs 7 million.

“This shows that there is not a person who manages and understands the administrative and technical issue of the development of our department,” he lamented.

Camacho, together with the rector of the Gabriel René Moreno Autonomous University (UAGRM), Vicente Cuéllar, promotes protests against the Government, to advance the census. For September 30, a town hall is planned in which pressure measures will be defined.

Prada assured that the governor “lives on violence and confrontation” and that “because of his absolute inability to manage, he always seeks confrontation between Bolivians and Bolivians.”