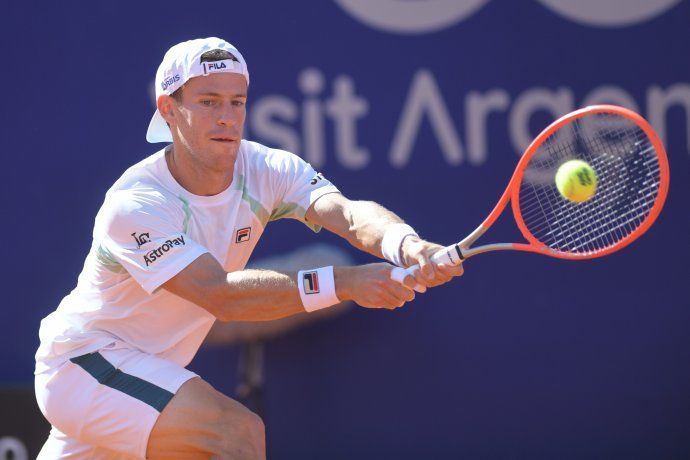 The Argentine triumphed after being set down and 1-3; Tsitsipas will be his rival in the quarterfinals.

Lorenzo Musetti was born 20 years ago in Carrara, in the Italian region of Tuscany. Right-handed and 1.85m, he is a diamond in the rough. In times when the two-handed backhand dominates from learning, he sports a classic one-handed shot and other highly creative devices.

The beautiful Court of the Princes of Monte Carlo Masters 1000 It was the scene of an extremely inspired performance by Musetti during a good portion of their duel for the 8th final against Diego Schwartzman (16th in the world), but the Argentine, optimistic by nature, exhibited a super reactionto prevail by 2-6, 6-4 and 6-3, in 2 hours 32 minutes, and advance to the quarterfinalswhere he will face the defending champion, the Greek Stefanos Tsitsipas.

Schwartzman, seeded 12th in the Principality, really suffered the actions of the first set. Musetti’s tennis (83rd in the world) became a real nightmare for the man from Buenos Aires, who could not find solutions. The young Italian broke his serve four times and overwhelmed him throughout the geometry of the court.

The player trained by Alejandro Fabbri and Juan Ignacio Chela managed just 40% of points with the first serve and 27% with the second. It was a partial to forget on the brick dust of Monte Carlo. Emboldened and with the massive support of the public (many Italians filled the seats), Lorenzo went to sit on his bench dreaming of a victory that would place him in the most outstanding quarterfinals of his career, after losing the 8th final in Rome 2020 and Roland Garros 2021.

Musetti, so far lucid, with good decisions and with hurtful blows, took a 3-1 lead in the second set and everything seemed to be heading for your victory. Nevertheless, Diego breathed, reacted, began to vary the heights, managed to break the European’s serve and placed 5-3. Musetti, who had been so close to success, felt the internal shock, lost conviction, his shots did not flow as in the first part of the match and Schwartzman was strengthened from the emotional aspect. El Peque, finalist this season in the Buenos Aires and Rio de Janeiro ATPs, began to draw great plays with his racket and took over the second set (6-4).

With the wind in his favor, the Argentine shook the third set score early, breaking Musetti in the third game to take a 2-1 lead. Diego continued sending messages from the other side, clenching his fist and fueling his convictions against a rival who was showing himself more and more impotent and irritated, although without losing his dangerousness.

In fact, the French umpire Arnaud Gabas (the one who unintentionally received a ball in the eye from the Canadian Denis Shapovalov, in a Davis Cup match), issued a warning to the Italian for salivating on a strap. Almost immediately Musetti threw a pitch and Schwartzman looked at the chair umpire as if asking him to fine him a point against, but Gabas chose to call the European to his chair and warn him.

Schwartzman, in high spirits, shattered Musetti’s serve again in the seventh game (5-2) and served to close out the match, but could not hold his service game (5-3). However, far from being demoralized and entering a hole of nerves and confusion, he hit fast, broke Musetti again (in total, the match had fifteen breaks) and signed an extremely valuable victory, due to the rival’s category ( Musetti, in addition, had kept the only previous duel between the two, on the hard surface of Acapulco 2021) and the prestige of the contest, and because he built a very good comeback (he was down set and 1-3) on a complex day.

Schwartzman first played a Masters 1000 main draw in March 2015, in Indian Wells, losing to Roger Federer after beating Jerzy Janowicz. His best task in a tournament of that hierarchy was in September 2020, in Rome, reaching the final (he fell to Novak Djokovic, but in the quarterfinals he defeated Rafael Nadal for the first time).

El Peque, who was already a quarter-finalist in Monte Carlo 2017 (he lost to Nadal), reaches that instance again in the Principality and this Friday (in the fourth turn of the central court, at approximately 12 in our country) he will face the last champion, Tsitsipas (5th in the world; he beat Serbian Laslo Djere 7-5 and 7-6 [7-1]), whom he leads 2-1 on record.

After an opaque experience on the concrete of the first two Masters 1000 of the season (quick eliminations in Indian Wells and Miami), Schwartzman, the best South American in the rankingtreads firmly on European brick dust and continues to add outstanding chapters to a career that already has many very good cinematographic pieces.