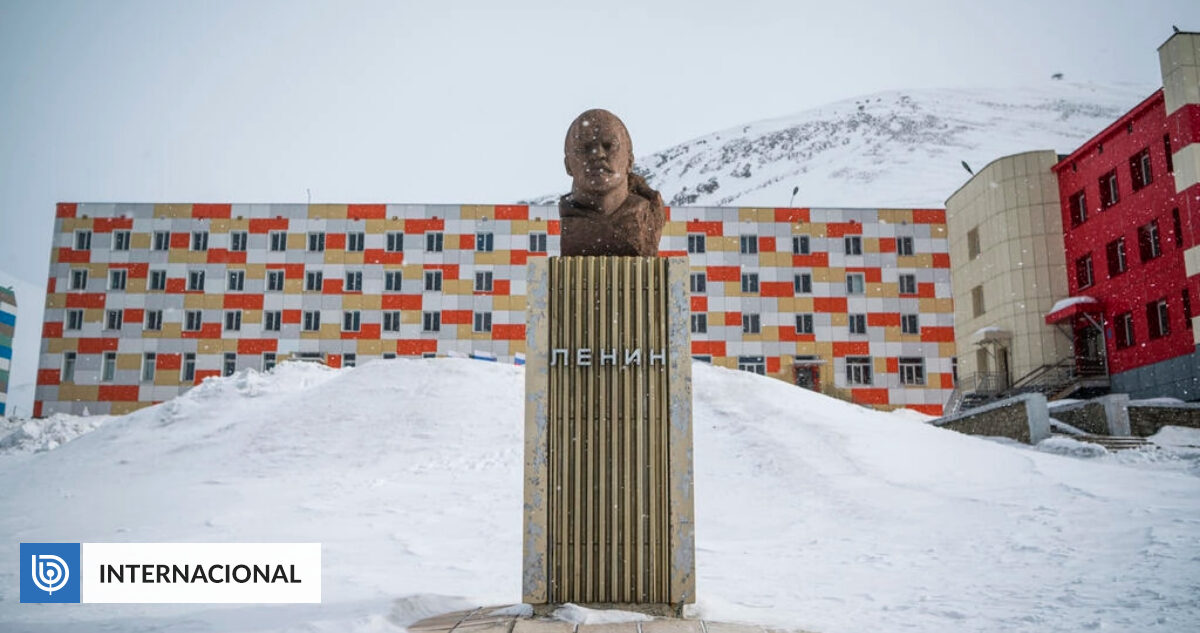 A thousand kilometers from the North Pole, this territory with twice the area of ​​Belgium is sometimes considered the NATO’s Achilles’ heel in the Arctic by offering the opportunity to Russia or China to make a mark in this strategically important and economically promising region.

The reason? An atypical treaty, signed in 1920 in Paris, which recognizes Norway’s sovereignty over Svalbard. Despite this, it guarantees the citizens of the signatory States (46 currently) the freedom to exploit its natural resources on the basis of perfect equality.

As a result, decades ago Russia, and before that the Soviet Union, mines coal on these islands inhabited by less than 3,000 people of some 50 nationalities.

In this cold place with temperatures around -20 ºC in winter, the Russian presence is perpetuated in the town of Barentsburg, where a giant sculpture stands with the slogan “Our goal: communism”.

Some 370 Russians and Ukrainians from Donbas they live around a low quality coal mine. In an elevated position of the town is the consulate of Russia, modern and protected by bars, with a lavishly decorated marble interior.

“Spitzberg (Russia’s historical designation for the archipelago) it is covered in the sweat and blood of the Russian people for decades,” says Consul Sergei Guschin.

“I do not dispute that it is a Norwegian territory, but it is part of Russian history,” Add.

The southernmost island of the archipelago, Bjørnøya (the island of los Osos), is located near the waters that Russian nuclear submarines must take to reach the Atlantic Ocean.

“The main interest of the Russians is to avoid a situation where others can use the place for offensive purposes,” analyzes Arild Moe, a researcher at the Fridtjof Nansen Institute in Oslo.

“To achieve this, they are going to maintain a reasonable presence and will be very attentive to what happens”, Add.

After requesting in vain a congestion at the end of the Second World War, Moscow now claims “bilateral consultations” to lift the restrictions that curb their activities in the archipelago.

Faced with the long decline of its coal mine, Barentsburg diversified its activity towards scientific research and tourism.

People go by snowmobile or by boat, depending on the season of the year, to admire what for decades was a window to the Soviet world from the other side of the Iron Curtain.

all these vestiges “We keep them here not because we still aspire to communism, but because we value our heritage and because tourists like to take photos with them,” says guide and historian Natalia Maximishina.

But Moscow reproaches the Norwegian authorities for hindering these activities, for example, by limiting helicopter flights in the name of the environment.

“Especially after the end of the Cold War and the dissolution of the USSR, when Barentsburg could barely survive,” Explain.

Was it to curb Russian ambitions? “Not officially, but actually, yes,” she acknowledges. “We had good arguments: it is a very fragile nature. But we particularly protected the spaces around Russian settlements.”

Russia regularly raises its voice and accuses Norway of violating an important provision of the treaty that, de facto, establishes Svalbard as a demilitarized space.

Every stopover by a Norwegian frigate or visit by NATO parliamentarians gives rise to official protests.

The same goes for the huge svalsat Satellite Station, near the capital Longyearbyen, the largest facility of its kind in the world.

On a windy plateau near the World Seed Bank known as the “Vegetable Noah’s Ark”, some 130 antennas protected by white radomes that look like giant golf balls communicate with space. According to Moscow, download military data.

In January, one of the two fiber optic cables linking Svalsat to the mainland was mysteriously damaged.

Russia is also accused of take liberties with the treaty.

Your deputy prime minister Dmitry Rogozin traveled to the archipelago in 2015 although it was banned by European sanctions after the annexation of Crimea in 2014 and Chechen special forces stopped there before exercises in the Arctic.

The experts rule out a scenario like in Crimea in the archipelago, but they predict new clashes due to the tension caused by the invasion of Ukraine.

“Svalbard is sensitive to the international situation”, analyzes Arild Moe. “It is a place where Russia can easily express its discontent and put pressure on Norway. We will probably see it in the future,” he adds.

For James Wither, professor at the George C. Marshall European Center for Security Studies, the archipelago is “NATO’s Achilles heel in the Arctic” because its “remoteness from mainland Norway and its particular legal status make it politically and militarily vulnerable to Russian adventurism.”

“Although the danger of a direct military confrontation is low,” Moscow could attempt advances to divide the western camp and “neutralize NATO”, this former British military man wrote in 2018.

Norway tries to play down Russian grievances, arguing that they are long known.

“I wouldn’t say they are putting us to the test, but there is growing interest in the Arctic from coastal countries and beyond,” says his prime minister Jonas Gahr Støre, praised for having strengthened ties with his Russian counterpart Sergey Lavrov during his time at the Foreign Ministry between 2005-2012.

“We want to see the progress of the communities in Svalbard (…) and it will be done in a transparent way,” he adds.

But out of an abundance of caution, Oslo shelled out some $30 million in 2016 to buy a sprawling property near Longyearbyen, the only one still in private hands on these islands.

Given the supposed interest of foreign investors, including China, the government justified the acquisition of the 217.6 km2 of NATO’s Achilles’ heel by its “I wish that those lands were Norwegian”.

The eventual arrival of new powers increases the fear of destabilization, a fear that Russia takes advantage of.

“If we leave Spitzberg, who will take our place?” Consul Sergei Guschin wonders. “It can be China, for example, or the United States, or it doesn’t matter which other state is party to the treaty.”