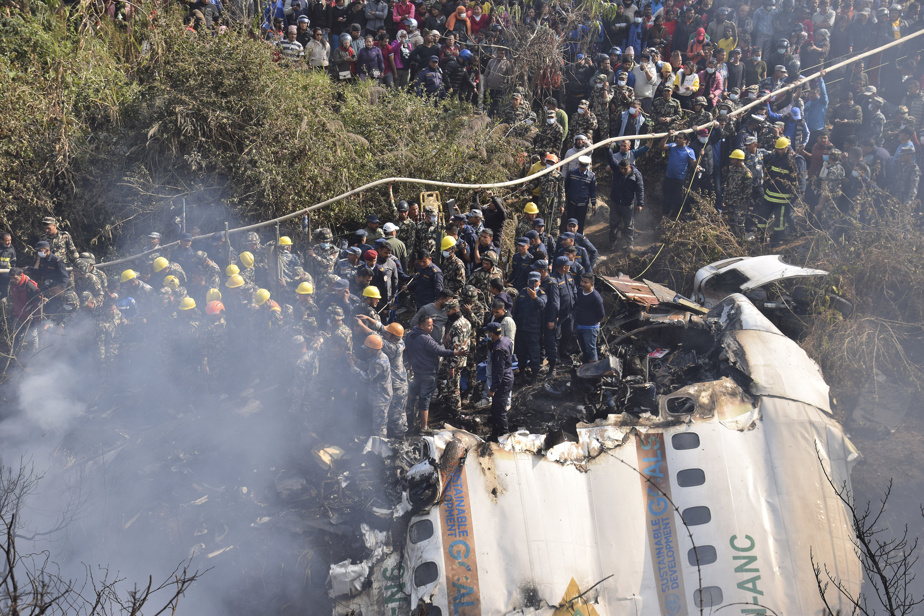 (Pokhara) At least 67 people died Sunday in Nepal in the deadliest air disaster in three decades in this Himalayan country.

Authorities said 72 people – 68 passengers, including 6 children, and all 4 crew members – were on board the twin-engine turboprop plane which plunged into a steep gorge, broke into numerous pieces and caught fire.

Five of them are still missing.

This Yeti Airlines ATR 72 from the Nepalese capital Kathmandu crashed shortly before 11 a.m. (local time) near the local airport in Pokhara, central Nepal, where it was to land.

The carcass of the burning aircraft was found at the bottom of a ravine 300 meters deep located between this former airport created in 1958 and the new international terminal opened on 1is last January in this city which is a gateway for pilgrims and trekkers from all over the world.

In the evening, amid the charred vegetation, soldiers were extracting corpses from the scattered debris of the ATR using ropes and stretchers, an AFP journalist noted.

“We are actively working to recover and identify the bodies as quickly as possible and hand them over to the families,” police official AK Chhetri told AFP.

A representative of the local authorities had previously assured that “some survivors” had been taken to hospital, but this information has not been confirmed by Yeti Airlines or other officials.

Sudarshan Bartaula, spokesman for the airline, told AFP that 15 foreigners were on board the plane: five Indians, four Russians, two South Koreans and four passengers from Argentina, Australia, France and Ireland. The others were Nepalese.

In a press release dated from Toulouse, in the south-west of France, ATR, the manufacturer of the aircraft, specified that it was about an ATR 72-500, adding that its specialists were “fully committed to support both the inquiry and the customer,” Yeti Airlines.

In a video broadcast on social networks, which AFP could not verify, we see the plane flying at low altitude above a residential area before suddenly tilting to the left, the all followed by a powerful explosion.

“I was walking when I heard a loud explosion, as if a bomb had exploded,” Arun Tamu, a 44-year-old witness to the scene, told AFP, who was about 500 meters from the scene. impact and posted a live video of the burning wreckage on social media.

“A few of us rushed to see if we could save anyone. I saw that at least two women were breathing. The fire was getting very intense and it was difficult for us to get any closer,” the former soldier continued.

Rescuers rushed to the site in an attempt to put out several raging fires that were billowing thick black smoke.

It is the deadliest air disaster in three decades in Nepal.

In 1992, 167 people on board a Pakistan International Airlines plane died in a crash near Kathmandu. Two months earlier, a Thai Airways accident killed 113 people near the same airport.

Nepal’s air transport sector has boomed in recent years, with aircraft ferrying goods and people to hard-to-reach areas, as well as trekkers and foreign mountaineers.

But it suffered from insufficient pilot training and maintenance.

The European Union has banned all Nepalese carriers from accessing its airspace for security reasons.

Also in Nepal are some of the most isolated and tricky tracks in the world, flanked by snow-capped peaks that challenge even seasoned pilots to approach.

Aircraft operators say Nepal lacks the infrastructure to make accurate weather forecasts, especially in remote areas with rugged mountainous terrain, where fatal accidents have occurred in the past.

In May 2022, the 22 people who were on board a twin-engine Twin Otter operated by the Nepalese company Tara Air – 16 Nepalese, 4 Indians and 2 Germans – died when the aircraft crashed shortly after takeoff from Pokhara. Its wreckage was found a day later, on the side of a mountain at an altitude of about 4400 meters.

Following this tragedy, the authorities tightened the regulations, in particular so that the planes are only allowed to fly if the weather forecast is favorable throughout the journey.