Home » On board the new Audi RS 3. It’s even capable of “walking sideways”
Business

On board the new Audi RS 3. It’s even capable of “walking sideways”

It raises the bar again in the new generation of Audi RS 3, the result of an improved chassis with more sophisticated electronics, plus an extra boost in engine torque and responsiveness. The result is one of the fastest and most competent compact sports cars on the market, which may cause some apprehension to direct rivals from Munich (M2 Competition) and Affalterbach (A 45 S).

Yes, there are still a few petrol-engined sports cars making headlines these days where electric mobility sweeps almost everything and the new RS 3 is definitely an exhilarating one hatch (now entering its 3rd generation), but also sedan (2nd generation).

In addition to a more modern and aggressive exterior design and an updated dashboard with the latest infotainment developments, some adjustments were made to the chassis and engine to make it faster and dynamically more competent than before, and we were on the test track of the ADAC to experience the result, on the passenger seat.

SEE ALSO: The last Audi with a combustion engine will be released in 2026, but…

More sporty on the outside…

The grille has a new design and can be surrounded by LED headlamps (standard) or Matrix LED (optional), darkened and with digital daytime running lights that can form various “dolls” in the 3 x 5 LED segments, like a flag as a detail that underlines the sporty character of the new RS 3.

In front of the front wheel arches there is an additional air intake which, together with the wider tracks 3.3 cm at the front and 1 cm at the rear, help make the look of this model even more aggressive.

The standard wheels are 19”, with the option of five-spoke options with the RS logo embedded and Audi Sport will be able to mount, for the first time, Pirelli P Zero Trofeo R tyres, at the customer’s request. The rear bumper has also been redesigned, integrating the diffuser and exhaust system with two large oval nozzles.

The flashing gearshift recommendation indicator changes the color of the rev display from green to yellow and to red, flashing in a way very similar to what happens in race cars.

The 10.1” touchscreen includes “Monitor RS”, which shows coolant, engine and gearbox oil temperatures, as well as tire pressure. O head-up display is available for the first time on an RS 3 to help keep you up to date with the most important information without having to take your eyes off the road.

The “racing special” ambience is enhanced by the instrument panel and RS sports seats, with the raised logo and contrasting anthracite stitching. The upholstery covering can be made of nappa leather with seams of different colors (black, red or green). 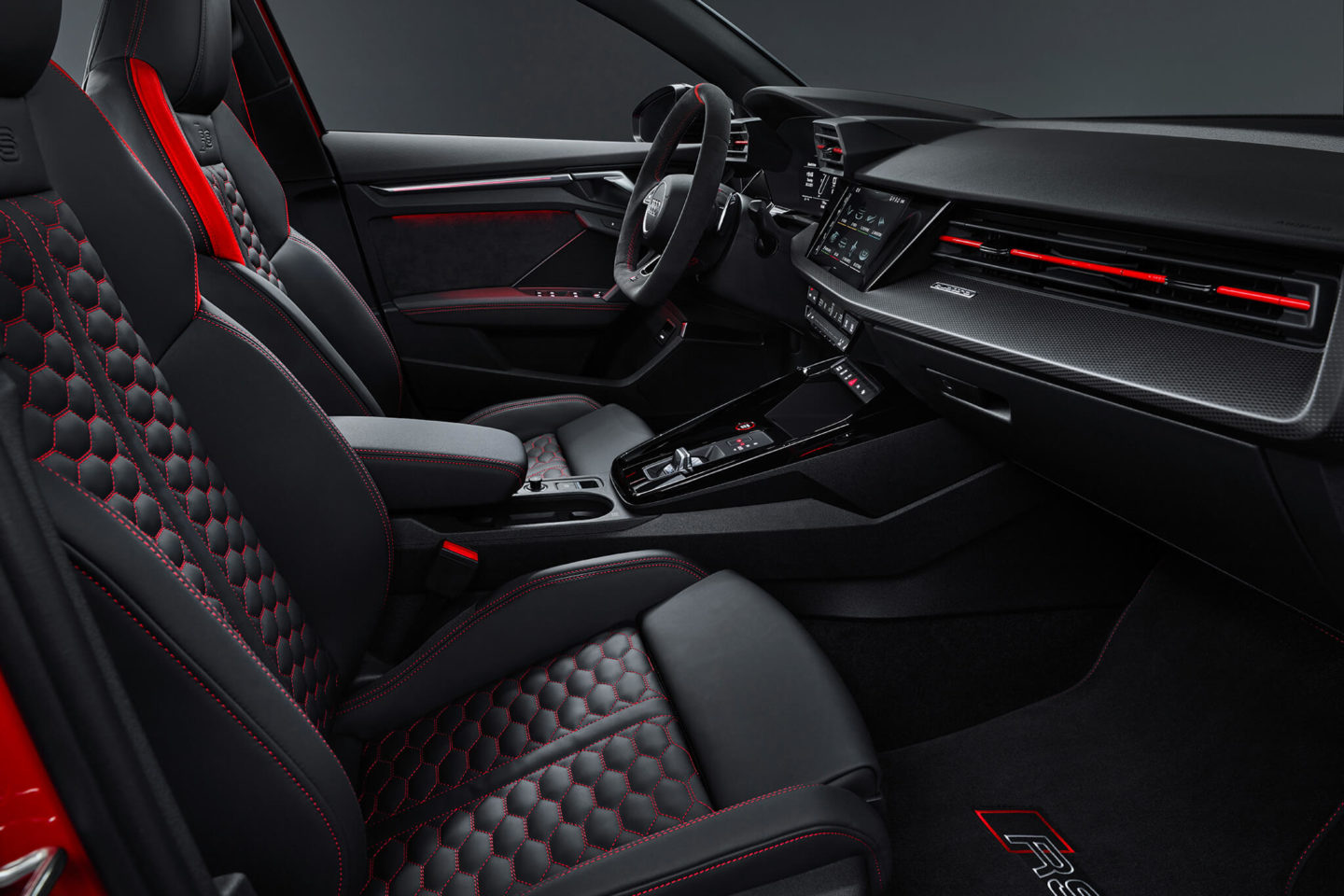 The multifunctional three-spoke RS Sport steering wheel with a flat bottom section features forged zinc paddles and RS mode button (Performance or Individual) and, with the Design package, a red stripe at the “12 o’clock” position for easier perception of the steering wheel position during very sporty driving.

Read Also:  3 million preschoolers need to reinforce their education due to the pandemic

Before entering the new Audi RS 3, Norbert Gossl — one of the leading development engineers — proudly tells me that “this is the first Audi with a standard torque splitter that really improves its dynamics”.

The predecessor used a Haldex locking differential that weighed approximately the same 36 kg, “but the fact that we can now fully vary the torque from one wheel to another on the rear axle opens up a lot of new possibilities for ‘playing’ with the car’s behavior” , clarifies Gossl.

Audi wants to use this torque splitter (which was co-developed with Volkswagen — for the Golf R — and which will also be used on CUPRA models) in most of its combustion engine sports futures: “In electric sports we can use two electric motors on the rear axle that produce a similar effect”.

MUST SEE: On the road and on the circuit. What is the CUPRA Formentor VZ5 worth, the most powerful ever?

The way the torque splitter works is by increasing the torque sent to the most heavily loaded outer rear wheel, thus reducing the tendency to understeer. In left turns it transmits torque to the right rear wheel, in right turns it sends it to the left rear wheel and in a straight line to both wheels, with the ultimate goal of optimizing stability and agility when cornering high velocity.

Gossl explains that “thanks to the difference in propulsion forces, the car turns better and follows the steering angle more accurately, resulting in less understeer and allowing earlier and faster acceleration out of corners for greater safety in everyday driving and fastest lap times on track”. So I ask if there is a lap time at the Nürburgring that can objectively illustrate the benefits of performance, but I just have to promise: “we’ll have it, soon”.

Chassis has been improved

Like the sportier A3 and S3 versions, the RS 3 uses the Vehicle Modular Dynamics Controller (mVDC) to ensure that chassis systems interact more accurately and quickly capture data from all components relevant to lateral dynamics ( synchronizes the two torque splitter control units, the adaptive dampers and the torque control for each wheel).

Other chassis upgrades include increased axle rigidity (to withstand the greater g-forces during stronger controlled skids and lateral acceleration the car is capable of), more negative camber on front and rear wheels, decreased ground clearance (25mm in comparison with the “normal” A3 and 10 mm in relation to the S3), in addition to the aforementioned widening of the routes.

The front tires are wider than the rear (265/30 vs 245/35 both with 19″ wheels) and wider than the previous Audi RS 3 equipped with 235 tires, to increase grip at the front, helping the RS 3 “holding nose” during skid and oversteer maneuvers.

Another important development has to do with the greater gap between the optional adaptive damping modes: between Dynamic and Comfort modes, the spectrum is now 10 times larger, and the reaction of the hydraulic fluid (which alters the response of the dampers) only takes a long time. 10ms to act.

The seven-speed dual-clutch transmission, which puts the power of the five-cylinder engine on the asphalt, now has a sportier step and, for the first time, the exhaust features a fully variable valve control system that amplifies the sound even more. than before, especially in Dynamic and RS Performance modes (the other modes are the usual Comfort/Efficiency, Auto and the second specific mode, RS Torque Rear).

The RS 3 is also available as a sedan.

Engine power is distributed to all four wheels in Comfort / Efficiency modes, with priority given to the front axle. In Auto the torque distribution is balanced, in Dynamic it tends to transmit as much torque as possible to the rear axle, which is even more evident in RS Torque Rear mode, allowing the driver with rider rib to perform controlled skidding on roads closed (100% of the torque is even able to be directed backwards).

The ADAC (German Automobile Club) test track was used by Audi to give some journalists the first chance to feel the power of the new Audi RS 3 and especially the car’s broad spectrum of behavior.

Frank Stippler, one of Audi’s test and development drivers, explains to me (with a gentle smile as I settle into the seat with reinforced side support) what he intends to demonstrate in this Audi RS 3 camouflaged on the short but winding track: “ I want to show how the car behaves in very different ways in Performance, Dynamic and Drift modes.”

Full throttle is astounding with the Launch Control program, with no sign of loss of wheel traction, clearly fulfilling the promise of less than 4s from 0 to 100 km/h.

So when we get to the first corners the way the car’s personality changes couldn’t be clearer: just press one button… well, more precisely two, because first you have to press the ESC-off button to completely turn off the stability control (The first brief pressure only switches to Sport mode — with greater wheel slip tolerances — and if the pressure is maintained for three seconds, the driver is left to his own riding resources).

And, in fact, the experience couldn’t be more emphatic: in Performance mode you can even try to chase some lap time records, as there’s no tendency to under or oversteer and torque is delivered to the wheels in such a way that the Audi RS 3 is almost as fast cornering as it is in a straight line.

When we switch to Dynamic, the superior dose of torque that is sent to the rear makes the car want to “wag its tail” for everything and nothing, but without too much excess. Until you select Torque Rear mode and everything becomes more extreme and skidding becomes an easy trick, as long as there is some care with the accelerator pedal as you gain speed and advance… sideways.

Audi will clearly have a very competent sporty compact when this new RS 3 hits the market next September. Thanks to marginally better performance numbers than their closest rivals BMW and Mercedes-AMG and a competent and a lot of fun behavior that will give these two brands some headaches.

Gerard Joling: ‘Bonnie saved herself on her own’ | Stars

Covid-19: WHO concerned about resurgence of cases in Africa

My return to … History and civilization of...

Menstruation: the world of work is finally adapting

The SERBE company, in the Eure region, winner...

Paying in bitcoin with Mastercard cards would be...

Book: Treaty of contracts relating to the legal...

Jeff Bezos, the richest man in the world,...