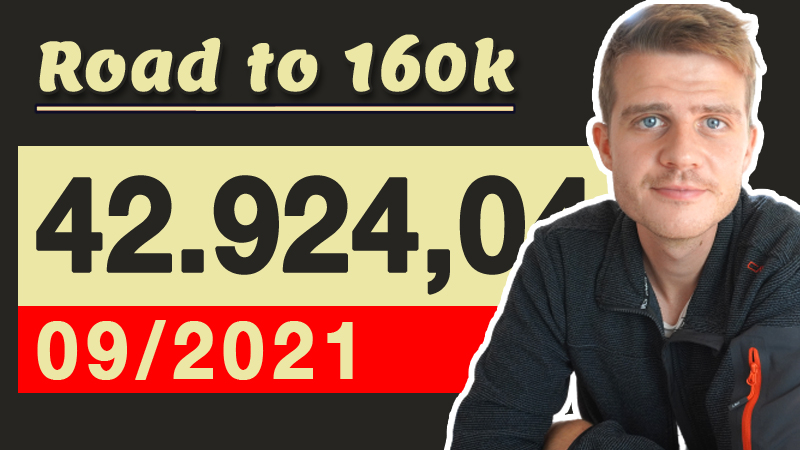 I have been publishing one regularly since January 2019 P2P lending monthly review. The format is therefore one of the oldest and most established on my blog. The monthly review is divided into two areas:

The P2P credit monthly review for September 2021 is about the record recoveries at Bondora, the successful licensing with VIAINVEST and Debitum, as well as the resilience of the PeerBerry platform.

Please note that this is not investment advice. On this blog I only write about my personal experiences and points of view, which is why I cannot guarantee the accuracy of the information or future developments of a P2P platform. More on this in the disclaimer.

My P2P portfolio in September 2021

First, an overview of how my P2P portfolio developed in September 2021.

In September 2021 I have 1,000 euros with VIAINVEST and 400 euros via Bondora Go & Grow invested. Otherwise no further transactions have been made.

The value of my P2P portfolio has increased increased from 41,331 euros to 42,924 euros. In perspective, this value should increase a little further each month and be over 45,000 euros by the end of 2021.

Bondora with a record month in recoveries

The strong recovery on the platform in September was more than gratifying. According to Bondora, 2.35 million euros were recovered last month, which corresponds to a significant increase compared to the previous record month (March 2021: 1.25 million euros). Personally, I was able to recover 164.40 euros in September, which was more than twice as much as in my second best month (November 2020: 79.98 euros).

As the reason for this development, several investors have pointed out that many Estonians probably got early access to their pension fund and thus outstanding debts could be settled. If this is the case, it is more likely that there will be an exceptionally high one-time effect. The first trend in October already suggests this.

If you want, you can think of it recently updated report on Bondora Portfolio Pro read through, which just went online last week.

EstateGuru (0,5% Cashback) financed loans of EUR 21.2 million in August, which is historically the second highest value in the company’s history. As a result, among other things, the outstanding loan volume (as of September 13, 2021) increased to EUR 174.6 million.

At the same time, the rate of the loans in the recovery process is only 8.2%, which means a small improvement over the last two months. So growth and performance seem to continue to go hand in hand at EstateGuru, although the target of 5% that we have set for ourselves is still a bit removed.

The most important innovation concerns the Introduction of the instant exit program, which I have already devoted myself to in detail on the blog. Investors can sell their loan portfolio to EstateGuru for an immediate discount of 35%.

TWINO is planning a future IPO

at TWINO (15 Euro Bonus) In September there was news in connection with the receipt of the Latvian IBF license. Accordingly, the platform not only wants to successfully complete the transition period as a full-fledged broker next year, but also introduce a new product offering for investors outside of the traditional lending business. For this purpose, both a mobile app development team and experts from the retail industry are currently being hired.

The TWINO founder and sole shareholder Armands Broks went one step further, daring a look into the future on the in-house blog. According to this, Twino should not only be transformed into a modern bank in the future, but also go public.

Our ultimate goal is to transform into a new-age bank and ring the Nasdaq bell in New York’s Times Square.

Even VIAINVEST (10 Euro Bonus) was able to announce the receipt of the investment brokerage license in September, probably as the last Latvian P2P platform for the time being. The fact that VIAINVEST took the longest of all platforms should be acknowledged with a smile in view of the current “speed deficits”.

One message that I personally perceived with regret is the departure of P2P platform lead and VIA SMS Group press spokeswoman Simona Lucatniece. Simona has not only accompanied the start and development of the P2P platform since the end of 2016, she has also always been a constant and reliable cornerstone in the relationship and communication between companies and investors.

Her decision was by no means against VIAINVEST, but rather in favor of a new challenge, on which she would not like to comment publicly until the next few months. So much in advance: Despite some inquiries, it will not be in the P2P sector.

Even Debt Network (25 EUR Bonus) received a brokerage license from the FCMC in September. With this milestone, the foundation for a strong last quarter should surely be laid. In September it was already possible to finance EUR 2.32 million in loans, which is the second-best value of the platform from a historical point of view.

PeerBerry continues to grow strongly, despite all adversities

PeerBerry (0,5% Cashback) has had a very eventful September 2021, which despite everything, was able to close with very strong results. In the end, the investors financed almost 56 million euros, which is a new record in the company’s history.

The communication that you are withdraw from the licensing process in Latvia and register his business in Croatia instead, not only made little impression on investors, PeerBerry himself probably didn’t expect it either.

Many partners have therefore built up larger cash reserves in the last few weeks in order to be able to pay off investors willing to migrate immediately. But because this did not happen, these funds were now used to invest in the lending business themselves. The result is that due to the already greater demand, the interest rates had to be lowered with several lenders.

Our partners have accumulated higher cash reserves in their accounts in advance, to settle with all investors immediately. However, no move from investors happened […] Currently, our partners have large amounts of accumulated reserves in their accounts and the first thing they will do is reinvest their profits into the business. This will temporarily lead to a lower need to borrow through the platform and correspondingly lower interest rates for investing in loans.

One wonders now what would have to happen that PeerBerry could not continue this growth. From my point of view, the platform is and will remain one of the most popular and popular platforms among P2P investors.