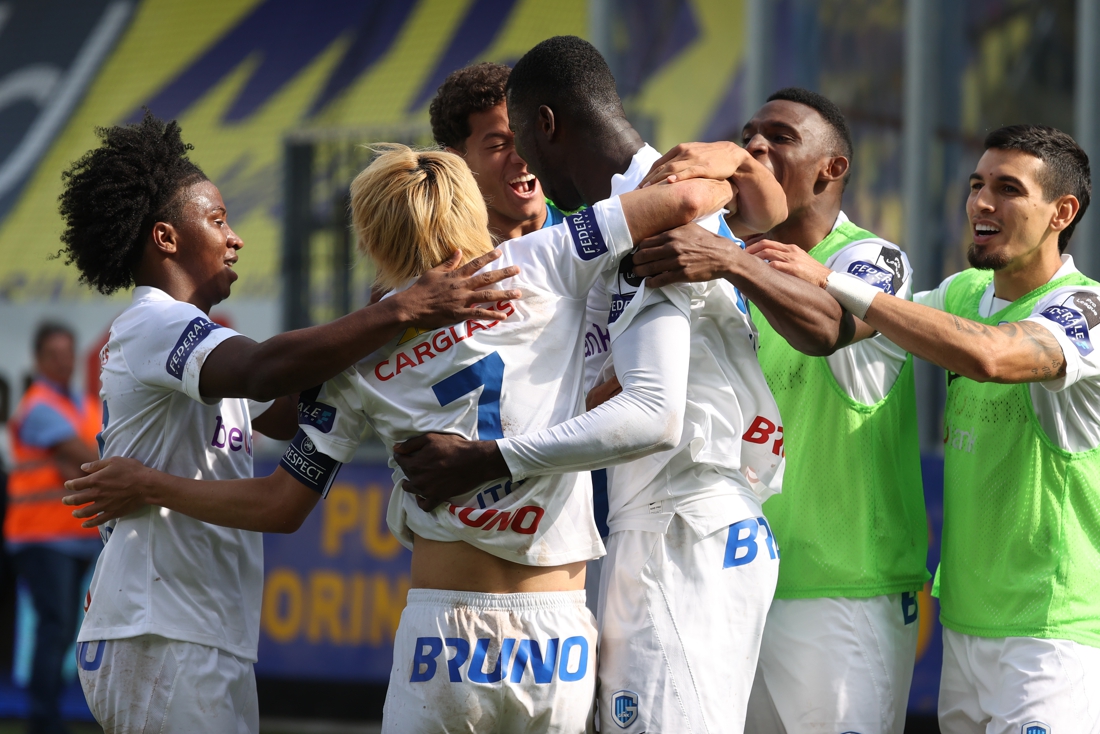 A Suzuki header seemed to put STVV on the way to a derby victory for a long time. But Genk invaders Paintsil and Onuachu made a late turnaround and made the Truiense hell and Genk heaven: 1-2.

While Bernd Hollerbach, as expected, gave confidence to the winning starting eleven from the Kiel, John van den Brom kept his word with no fewer than seven newcomers in the basics: he rotated completely in these “killing” weeks. The strongholds Heynen, Onuachu, Munoz and Lucumi started on the bench, in addition to the injured Bongonda, Thorstvedt and Eiting were also missing from the match sheet.

A technically superior Genk immediately claimed possession with a lot of movement and short ball changes. The first chance in the quarter was immediately a good one, Toma was allowed to take a free shot on Trésor’s perfect pass, but didn’t get any further than a faint let-down with the left. Lefgozer Oyen kicked in front, an ubiquitous Trésor was himself blocked in extremis.

STVV tried to exploit the surplus of stature on stationary phases. The Canaries created their best opportunity after half an hour. Leistner headed back to Hashioka, who aimed his volley too high.

STVV had meanwhile restored the balance, a faint derby bobbed towards the halftime signal. Until Cacace squeezed past Preciado and Vandevoordt tested with a sharp cross. With the help of McKenzie, the Truiense kept Genkenaar – or is it a Genk Truienaar? – are nets clean.

Deep in injury time, Vandevoordt had to give in. The Truiense opening goal was of pure Japanese excellence. Devil-does-all Hayashi found on the right the continued Hashioka, who unpacked with a fantastic cross. Between the receding McKenzie and Preciado, the detached Suzuki couldn’t miss with the head at close range: 1-0.

Misses of Toma and Suzuki

The second half started like the first. The visitors carried out the forcing with a quick circulation of the ball. It quickly led to an open opportunity for Toma, who was guided through the center but missed incomprehensibly from close range.

The Genk attacking spirit opened counter perspectives for the home team. Suzuki should have taken care of the 2-0 before the hour. A copy of the opening goal seemed in the making. This time, Brüls, who had just come in, provided the perfect pass, but Vandevoordt somehow managed to whip the header out of his goal area.

Against an increasingly lower Truien block, John van den Brom tried to turn the tide with a triple substitution. Successfully. Because in addition to Heynen and Onuachu, the Genk trainer also brought in Joseph Paintsil. Precisely the Ghanaian, who seemed to be heading towards Turkey at the end of the summer mercato but ultimately stayed on board, ensured the deserved equalizer. After a wing change by Preciado, he dribbled in from the left to find the farthest bottom corner with the perfect place ball: 1-1.

It turned out to be the impetus for a complete turnaround. Because two other substitutes also put together the 1-2. Heynen threatened with a shot but delivered a cross, which headed Ito back to Onuachu. The Golden Bull kept some defenders off with a feint and kicked in as controlled as untenable: 1-2.

Because Onuachu also set off dangerous crosses in a fierce final phase on the other side, Genk pulled the derby victory over the line. And it continues to run in the leading group.