Home » News » PKB vs PAN is hot because of insinuations from the new minister, shocked 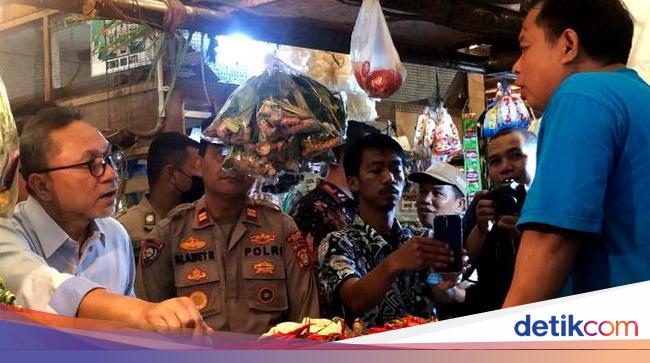 The National Awakening Party (PKB) and the National Mandate Party (PAN) were hot and quipped at each other. It started when there was an insinuation regarding the figure of a new minister who was judged to be acting shocked.

It is known that the new Trade Minister, Zulkifli Hasan, immediately stepped on the gas on his first day in office. In the morning he made a working visit to Cibubur Market, East Jakarta.

Zulhas checked the basic prices of food commodities, such as rice, eggs, meat oil, and others. He admitted that he was surprised by the condition of food prices in Cibubur Market.

“I am shock. Buyer moanwhich trades as well moan,” he said in front of reporters, reported by detikFinance, Thursday (16/6/2022). Zulhas said there was an increase in almost all food commodities, except rice.

Meanwhile, there was an innuendo from the chairman of the PKB, Muhaimin Iskandar or Cak Imin, who brought up the new minister’s figure, which he called acting with shock. The satire was then responded by PAN with the insinuation of the Minister of Villages, Development of Disadvantaged Regions, and Transmigration Abdul Halim Iskandar ‘as if nothing’. Then the satire was returned by PKB who asked the newcomers to know themselves. Until finally PAN answered the decision reshuffle Cabinet does not always make everyone happy.

Here is the beginning of the journey of the case.

Cak Imin: How come the new minister is acting but he is shocked

PKB General Chair Muhaimin Iskandar made a satire at the new ministers in the Advanced Indonesia Cabinet. The general chairman of the political party, known as Cak Imin, said the new minister was acting surprised about the rising price of goods.

“How come the new minister acts but uses shock, the goods have gone up for a long time, why are you surprised,” said Cak Imin through his personal Twitter account @cakiminNOW, as seen on Friday (17/6/2022).

Through the same Twitter account, Cak Imin also posted a photo of him with the Head of the Spiritual Assembly of Muslim of Russia Mufti, Sheikh Albir Krganov, in a tablig akbar event with the habaib, Thursday (16/6), at the Sunda Kelapa Mosque, Menteng, Central Jakarta.

In posting the photo, Cak Imin also wrote the word ‘shocked’. However, the Deputy Speaker of the Indonesian House of Representatives did not mention the name of the minister who acted shocked.

As is known, there are two ministers appointed by President Jokowi in reshuffle cabinet June 15. The two ministers are PAN Chairman Zulkifli Hasan (Zulhas) and former TNI Commander Hadi Tjahjanto.

Among the two new ministers, the one appointed to take care of goods is Zulhas as the Minister of Trade. Meanwhile, Hadi was appointed Minister of ATR/Head of BPN.

PAN then replied to Cak Imin’s satire. More on the next page.