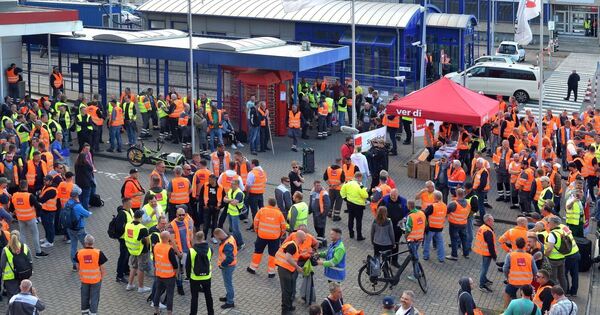 Hamburg/Bremen. For the first time in decades, port workers have largely paralyzed the handling of ships with a warning strike at Germany’s major seaports and aggravated the already tense situation at the terminals.

With the work stoppages on Thursday, the employees wanted to increase the pressure on employers to present a new wage offer at the third round of collective bargaining this Friday in Hamburg. From the point of view of the Verdi union, the previous one is insufficient and does not do justice to the situation. The Central Association of German Seaport Companies (ZDS) described the warning strike as irresponsible and unacceptable.

The ports in Hamburg, Emden, Bremen, Bremerhaven and Wilhelmshaven were affected by the work stoppages of the port workers during the late shift. According to Verdi, container handling largely came to a standstill – which further increased the already massive delays at the quayside. Dozens of ships are waiting to be cleared in the German Bight because of container shipping, which has gotten out of step as a result of the corona pandemic. For the three terminals of the Hamburg port logistics company HHLA alone, ten ships are in the roadstead off Helgoland, said company spokesman Hans-Jörg Heims of the German Press Agency.

According to calculations by the Kiel Institute for the World Economy, ships with almost two percent of the global freight capacity are currently damming up in the North Sea and can neither be loaded nor unloaded in Germany, Holland or Belgium. There is no end in sight: After the months of lockdown at the world’s largest container port in Shanghai were lifted, a wave of container freighters is now rolling towards Europe. At the same time, there are already hardly any container slots in the ports because boxes that would otherwise be transported on within a short time now have to be stored temporarily.

Disrupted supply chains with sometimes week-long delays of the container giants also have direct consequences for the port workers. According to Verdi, the employees showed extreme flexibility during the pandemic and did a lot of overtime.

Accordingly, the union considers its demands for the port workers in the 58 collective bargaining companies in Lower Saxony, Bremen and Hamburg to be justified. Verdi demands, among other things, an unspecified “actual inflation compensation” for the approximately 12,000 employees and an increase in hourly wages by 1.20 euros. With wages currently ranging from just under 15 euros to a good 28 euros per hour, this means a salary increase of up to 14 percent. The employer side has so far offered two increases this year and next of 3.2 and 2.8 percent and one-off payments totaling 600 euros.

For ZDS negotiator Ulrike Riedel, the warning strike is unacceptable. The employers’ side submitted an offer that compensated for the employees’ losses in real wages. This offer is consistent with many other Verdi collective bargaining agreements.

According to Verdi, more than 1,000 employees took part in the warning strike, which lasted several hours, in Germany’s largest port in Hamburg. At the three HHLA terminals alone, almost 1,000 employees took part in the walkouts. At the competitor Eurogate, the union counted around 400 participants. “Everything is fine,” it said there with a view to the handling of container ships.

In the second largest German port of Bremerhaven, around 1,000 employees took part, according to union information. According to this information, no more container ships were loaded or unloaded at the Stromkaje in the late shift. “The bridges are all standing still,” said Tobias Uelschen from Verdi. Car loading was also affected. Employees also stopped working in Bremen and Wilhelmshaven. The same applied to Emden, where car loading and the handling of other seagoing vessels were affected.