Rings in the Solar System 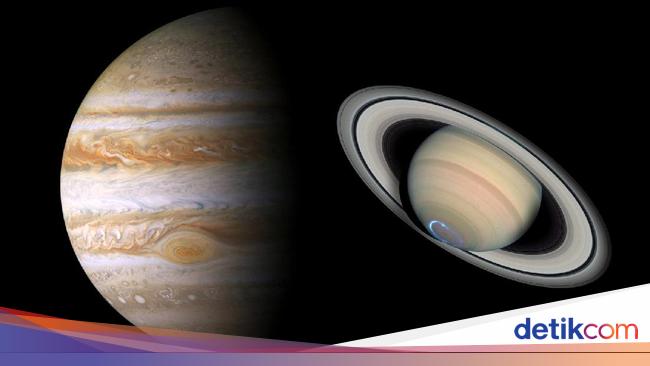 Rings are not an alien shape in the Solar System. When the Sun was just forming, there was already a ring of gas and dust circling the Sun. It is from this material in the rings that the planets and other objects in the Solar System are formed.

Not only that. Among the planets that form in the Solar System, some are surrounded by rings of rock, dust, and ice, ranging in size from micro-sized to millions of kilometers.

Interestingly, these ringed planets are giant planets. But the rings are not the monopoly of the giant planets. Astronomers have also found rings on dwarf planets and asteroids. Curious about what objects have rings in the Solar System? There are six ringed objects that have been found, namely:

Saturn’s rings are very famous. We can even see it with a small telescope. The first to discover Saturn’s Rings was Galileo in 1610. However, Galileo did not recognize them as rings and referred to Saturn as a triplet planet, which nearly coincided. It wasn’t until 1965 that Christian Huygens proved it to be a ring revolving around Saturn.

The first photos of Saturn’s rings were only obtained when the Pioneer 11 mission visited Saturn in 1979. The Pioneer 11 visit proved that these rings were formed from tiny particles of water ice. After that there were Voyager 1 and 2 missions and Galileo and of course Cassini who visited Saturn.

From these observations, we know that Saturn’s rings have several large rings composed of billions of chunks of ice and rock of various sizes, from grains of dust to particles the size of mountains.

Saturn’s rings span 282,000 km from the planet and have seven main rings separated by voids. The material in the rings comes from the debris of comets, asteroids or even satellites that were crushed by gravity before reaching Saturn. The fragments or fragments of these objects are then trapped as rings.

The second ring found in the Solar System is the ring of Uranus. Not from the mission sent but from observations of the occultation of the star SAO 158687 on March 10, 1977. Observations made by James L. Elliot, Edward W. Dunham, and Jessica Mink, showed the presence of 9 thin, opaque rings on the planet Uranus that roll around as it orbits Sun.

The thirteen rings of Uranus are very dark and are composed of particles of ice and dust. Interestingly, Uranus’ ring particles are only 600 million years young. Thus it can be assumed that the material in this ring comes from debris and fragments caused by satellites colliding with each other. The dark particles are thought to be dark irradiated ice, with a complex mixture of hydrocarbons adhering to the ice as it forms.

The third ring in the Solar System was discovered by Voyager 1 in 1979. This ring is composed of tiny, dark dust particles that are difficult to see unless illuminated by the sun. And indeed Voyager discovered Jupiter’s rings when it looked back at the sunlit Jupiter.

Jupiter’s ring consists of three parts, namely a thick inner ring known as the halo ring, the main ring which is 6500 km wide with large particles in it, and a pair of faint rings in the outermost area, namely the gossamer ring, named after the satellite that produced it. material for this ring. The Ring of Amalthea and Thebe.

Jupiter’s rings are fainter and are made of reddish-dark matter. That means, the ring material is rock and dust fragments. In addition, the debris comes from the collision of rock and ice that hit a satellite or small moon on Jupiter.