Sanremo Rock 2020, the winners are the Magenta # 9 from Bolognina – Cronaca 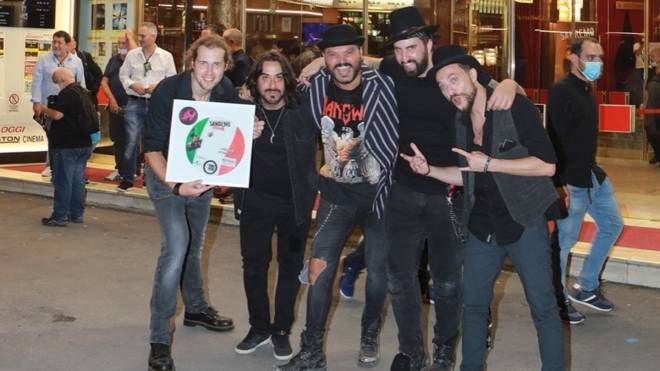 Bologna, 14 September 2020 – The Bolognina conquers the Ariston. It happened on Saturday night, when Magenta # 9, heavy metal band with lyrics in Italian, led by Alessio Amos Amorati, one meter and ninety of guitarist and frontman – who made the name of the group from his street and the house number in the neighborhood behind the station – conquered ‘Sanremo Rock’, defeating seven other formations. Amorati, who works as an engineer during the day and who with the other members of the group (Amedeo Mongiorgi guitar and voice, Fausto De Bellis guitar, Michele Cavalca bass, Raffaele Marchesini drums) earned the nickname “i ceffi della Bolognina”, he admits: “We are returning to our victorious neighborhood and now we have a dream, which is to play in piazza dell’Unità”.

Amorati, so don’t you aim for piazza Maggiore like all the local groups that triumph ‘abroad’?
“But no, piazza Maggiore can wait. We would really like to be able to play in the heart of our neighborhood, in this small town within the city, which hosts our urban microcosm, in that square frequented by all generations, which is the symbol of a truly neighborhood. I remember that our music is for hairdressers, beauticians, tobacconists, journalists, newsagents, shopkeepers, anyone from this multi-ethnic slice of Bologna that is often denigrated “.

Do we have to tell the president of the Ara district?
“I personally don’t know him, but if he can serve from the pages of the ‘Carlino’, then let’s do it”.

Saturday night you won with your workhorse, that ‘Cannot’ that came out during the lockdown. Has anything changed since last April?
“Many things still cannot be done, but it is a dream to have been able to go to Sanremo for a week, passing the semifinals and the final and winning. When we signed up last January, it could have been one of the many possibilities in a world where competitions and concerts are taken for granted, they are made, there is the public, there is the jury and so on … but having been able to do it only four months after the end of isolation, with two hundred people in the room, even if with a mask, I find it miraculous. “

Now what has changed for you?
“Many have called us, newspapers, radio, TV. They want to know who we are, we are curious … who will these ‘thugs’ ever be? Anyway, waiting for Piazza dell’Unità, next Thursday, September 17th, we will play at the Pontelungo review. .. come in large numbers “.

Is it difficult to understand who you are?
“It’s not easy, because there are many bands, YouTube is flooded with thousands of videos, on Spotify there are many songs … but if you don’t have a kind of visibility on the big media, especially outside of Bologna and outside the native environment , it is not easy to arrive “.

How did you do it?
“We signed up, we made the regional selections in mid-August in Montefredente, above Monghidoro, where eagles dare, there we won the semifinal, we reached the final in Sanremo and we won it and then the final. So I can say that we did it by trying “.