Home » News » Serena Arrighi is the new mayor of Carrara: “I dedicate this victory to women” 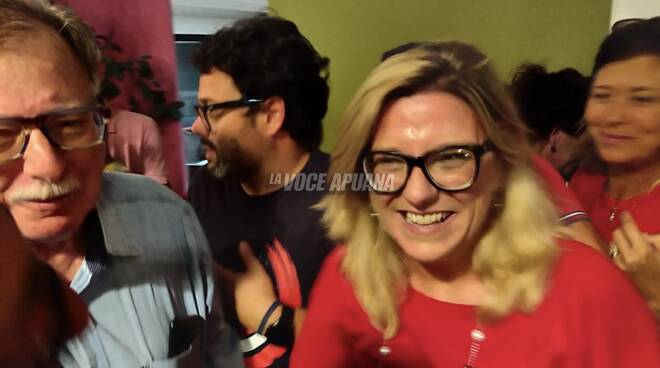 Serena Arrighi it arrived under the Municipality “escorted” by a cheering crowd to the tune of “Bella Ciao”. Among the political figures who accompanied her, the president of the province and mayor of Montignoso, Gianni Lorenzetti, stood out. “Thanks to the young people who have been with me,” he says, he frowns at the abstention and acknowledges: “Carrara is a city linked to the values ​​of the center-left and the coherence of the political initiative has rewarded us”.

In so many supporters of Serena Arrighi they are gathering under the civic palace. Among these there is also the former mayor Angelo Zubbani which does not hide the enthusiasm for the victory of the candidate of the Democratic Party: «The coherence, the novelty are values ​​that have not expired. We worked in support of Serena, we didn’t start together because we didn’t find a political denominator. From tomorrow the problems of the city are at the center with a municipal, provincial, regional and national supply chain. We did not hide behind civic lists. It is a round result that will allow Serena to work calmly ».

A scream of hip-hip-cheers: an embrace between bottles of sparkling wine and thunderous applause in the Nazzano headquarters upon the arrival of Serena Arrighi. «I dedicate this victory to all women and young girls. There have been sexist and vulgar attacks in this campaign, the woman always receives attacks on a professional level. Thanks to my team, my colleagues and my family. My husband is there tonight. I believed in it from the start. He won good politics. People want policies that do not compromise, that have a program and remain consistent with it: recognize their identity and remain consistent with it. As I had already stated, the first thing I will do is to reorganize the municipal offices and enhance the professionalism of the staff in common “

The first comment that comes from Caffaz’s coalition is that of Cosimo Ferri: «Let’s think about our 15.2% and what we have built. We are now ready for the opposition. Abstention won, the candidates in the ballot did not warm hearts, those who govern the city will have to rebuild the relationship between citizens and the administration. Best wishes for the mayor Arrighi, I hope she knows how to be independent from the parties but I doubt it ».

Serena Arrighi has not yet arrived while in her headquarters in Nazzano her “people” and her staff raise their arms and peel their hands in applause while the results on the individual sections arrive. Zanetti, former candidate of the center-left in 2017: «Wonder, on a personal level in politics there are no revenge but it is a great satisfaction: a candidacy that we thought embodied the spirit of the city and so it was. I am more tense than 2017. It is the demonstration that politics still has a sense, politics that speaks to people that is not made up of tactics with a left-wing vision without populism and demagoguery. You embody the gentle revolution of the city ».

One hour from the start of the count, the celebrations begin at the electoral committee of Serena Arrighi, who becomes the new mayor of Carrara. With 55 sections scrutinized, the center-left candidate remains firmly ahead: 56.93%.

After half of the sections scrutinized and the result does not change much: Arrighi almost 57%, Caffaz 43%.

Serena Arrighi one step away from victory. With 26 sections out of 71 it is difficult to overturn the result. The center-left candidate is ahead with almost 58%.

With 16 sections scrutinized, Serena’s advantage is consolidated Arrighi: 57.91% against 42.09% of Caffaz. Meanwhile, the first citizens begin to gather under the Municipality. Unlike previous times, however, there is currently no screen to follow live results.

The first data from the sections arrive. Four sections scrutinized out of 71, the partial result sees Serena Arrighi ahead with almost 58%, against 42% of Simone Caffaz.

The first definitive figure to arrive is that of the turnout which is confirmed in decline: at 11.00 pm 41% of those entitled voted, 8 points less than in the first round. This means that almost 22 thousand people out of 53,274 total voters voted.

Carrara has the new mayor. The polling stations have just closed and in these minutes the ballot begins. The first results will not be long in coming. Recall that the contenders for the highest seat in the city are Serena Arrighi (Pd and center-left lists) and Simone Caffaz (center-right and civic lists).