(CNN)Sharon Osbourne is no longer “in the red.”

Thanks to celebrity colorist Jack Martin, “The Talk” co-host is now rocking white hair instead of the red she’s been sporting for years.

Martin shared a photo of her dramatic transformation on his Instagram page.

“Sharon has 100% white hair and she was coloring her hair once a week dark vibrant red for the past 18 years,” he wrote in the caption. “She explained to me that she wanted to do this transformation long time ago but every time she attempts it ends up with a disaster.”

According to Martin, Osbourne had grown weary of having to color her hair once a week.

“I didn’t promise Sharen (sic) anything but I told her I will try my best,” he wrote in the caption. “It took me a total of 8 hours from start to finish to get her to a platinum blonde so she doesn’t have to be committed to coloring her hair once a week anymore.”

Martin is also the man responsible for Jane Fonda’s white hair at this year’s Academy Awards. 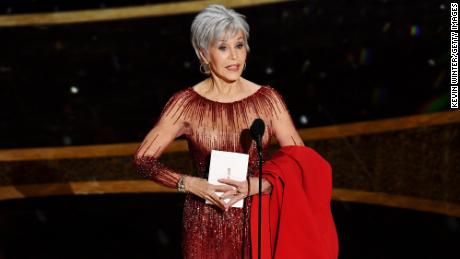 He wrote in the caption of a photo with him and Fonda that it took him seven hours to achieve the look the “Grace and Frankie” star was looking for.

I had the honor and the pleasure to transform the legendary actress @janefonda hair specially for the 2020 Oscar. Spending 7 hours with this amazing Hollywood star and witnessing her energy, beauty, strength and femininity was so inspiring. For straight 7 hours while I was working on her hair she was writing chapters in her due soon book, and memorizing her lines in the famous tv show Frankie and grace that she is shooting the 7th season now, answering emails and reading her newspapers plus communicating with me and her team with the sweetest, humblest soul, she made me feel ashamed to complain of being tired. This experience was extremely great and I will never forget this amazing day, thanks to the talented @jjhanousek and @deleonmakeup for nominated me to her. Formula: Jane had about 3 inches of her salt and pepper natural roots and the rest was a little tired warm golden blonde, her goal color was a silver icy blonde to surprise everyone at the 2020 Oscar presenting the final award winner for the movie of the year. I started the 7 hours process by giving miss Fonda a platinum card, by bleaching all her hair back to back by taking very thin sections in foils using @oligopro extra blonde with 20 vol and olaplex on the virgin hair and 10 vol with @olaplex on previously colored hair. Once I reached very pale blonde level 11 After 3 hours processing rinsed hair and did olaplex number 2 for 20 minutes, rinsed hair then prtone hair to cancel all the yellowish hue in the hair and prepare a solid white canvas by using @redken shade eq 1/2 oz 9B + 1/2 oz 10vv mixed with 3 once of clear (00) and double the total amount of processing solution for about 10 minutes, rinsed hair, towel dried and apply the final toner by @wellahairusa blondor 1/2 pale silver + 1/2 pale platinum mixed with 6 vol developer for 30 minutes, shampooed, conditioned. Hair felt amazingly healthy and Jane was extremely happy for getting her dream hair that took her a while to find a colorist that can do it perfectly in a very painless process. @modernsalon @behindthechair_com @american_salon #sliverhair #whitehair #platinumhair #oscars2020 #theoscars2020

“Hair felt amazingly healthy and Jane was extremely happy for getting her dream hair that took her a while to find a colorist that can do it perfectly in a very painless process,” Martin wrote.