Show this to the other premium manufacturers: Lexus NX 350h test

Home » Business » Show this to the other premium manufacturers: Lexus NX 350h test 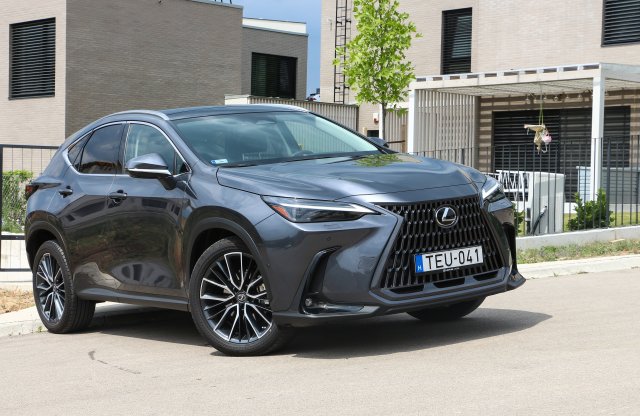 The new NX in its natural habitat, among the villas under construction in Buda: if a Toyota Corolla is an average copper cube, then this car roughly corresponds to the building visible behind it

Neither the radiator grille nor the headlights are too big on the nose, so it is much less ostentatious, but much more elegant than its competitors.

The term premium car, like so many other concepts, changes almost every day. It’s worth looking at what was called premium in the different decades, because then it turns out that this is what manufacturers are trying to slap on everything these days. This word has become somewhat clichéd, even though it once had a serious meaning, but it is clear from the various trends in today’s premium category that every more expensive brand is looking for its own way, its own definition of real, modern premium. All of this is especially spectacular when, say, you switch from a Mercedes to a Lexus, because not everyone would categorize the two into the same group. While some German premium manufacturers want to be more than popular cars with unnecessary performance, others with spectacularly luxurious design elements, and with an emphasis on digitization and modern technology, Lexus has chosen a much more restrained, much more sophisticated solution, which is very easy to demonstrate with the example of the NX.

As rounded as it is from all other angles, it’s as angular from the front and rear, maximizing space in the 1,865-millimeter-wide and 1,670-millimeter-high body

Don’t get me wrong, it’s enough to look at this Lexus to notice its superiority, but it doesn’t shove it in our faces nearly as much as the German colleagues operating with huge radiator grilles and large, over-complicated headlights. Lexus has chosen the path of elegance, which is somehow surprisingly good even for this very large, 4.66 meter long, 1.87 meter wide and 1.67 meter high, 1,810 kg creature. Of course, the spindle-shaped mask, which essentially reaches from the hood to the ground, is not small here either, and the spectacular design of the Quad-LED headlights has not been forgotten either, but somehow the overall image has become much more restrained and therefore more elegant, perhaps because the designers have found the golden middle ground everywhere .

You can’t connect it to the dashboard either, whether style, comfort or functionality is our main consideration for a car

As huge as the central display is, the digital instrument unit is so small, but since perfect elegance hides the limits of the narrow screen, the end result is not striking, and even tasteful.

Inside, we can experience the same perfect balance, even the huge, 14-inch central display catches the eye at first, but then its presence becomes completely natural to the user. The analog feel of the car is further supported by the retention of the buttons for the most important functions and the temperature dials for the two first climate zones, the latter of which are skillfully integrated into the screen to show the selected temperature. The most beautiful thing is that the modern technology that is so often shoved in our faces enmeshes the model down to the last little detail, but here it comes to the fore when it is needed: there are thousands of examples of this, one of which is the display projected on the windshield, which reads , which unmarked steering wheel button does what when you drag your finger on it.

The dials and buttons have not completely disappeared, which makes the interior sufficiently modern

If you drag your finger over the unmarked steering wheel buttons, which have a much more elegant appearance, the car will display which button does what on the windshield

In the NX, the passengers will not complain either, because the space available is excellent, for 5 people it is almost a waste of space. If there are 180-centimeter people sitting in the front, there is still enough space for three adults in the second row of seats, whether we look at the headroom or the legroom, the seat is of course designed for 2 people with fold-down elbows in the middle. In addition, you can find practical storage and combination options in the interior, one of my favorite little things was the compartment in the front armrest that can be opened from both sides.

Even medium-sized items can be hidden in the front elbow compartment, which can be accessed from both sides

Behind the passenger compartment, we find a really huge 555-liter trunk, which has a huge, naturally electrically opening door for better packing. Nevertheless, due to the crossover appearance, the bottom edge is high, which alone can make packing difficult in the case of larger shipments. quite large things can be packed into the NX without any problems, with the space-saving, collapsible hat rack and the 60:40 folding flat rear seat backrests, the cargo space can be increased to 1,436 liters, under which – instead of a spare wheel – there is an extra container with a smaller capacity for shopping .

If you do have to tilt the backrests, you can get a cargo space of more than 1.4 cubic meters in no time.

These things, however, are only a very small part of what this car and the Lexus brand as a whole suggest. Because the Japanese paid attention to the fact that the many modern technologies, the elegant, spectacular appearance and the correct amount of space only serve to complement something that used to distinguish premium products from the four-wheelers of the common people, which is what this entire segment was built on: comfort.

In the NX, everything that doesn’t serve to get you from one place to another relaxed, undisturbed, and in perfect calmness, whether standing in a city traffic jam or speeding on the German highway at 200 km/h, is secondary.

When you sit in it, it’s as if life stops, there is no hustle and bustle, no hurry, no stress. The interior of the NX is made with excellent materials, the touch of every detail suggests perfection, every seat is a comfortable but flawlessly stable armchair. Thanks to the well-insulated bodywork, neither the noise of the chassis nor the sound of the engine, and even wind noise, despite the high construction, does not penetrate to a disturbing extent. Thus, the NX shuts out the outside world even in deathly silence, but if we want to break the silence, with the help of the 17-speaker Mark Levinson hi-fi, we can even feel like we are standing in front of the Sziget Festival’s speakers. It is also phenomenal at consolidated volume, but when turned up to maximum, it is not only brutally and unnecessarily loud, but even then it sounds flawless. Why? Maybe because of what the whole car suggests: don’t just have something for a kilo, if we’re going to do it, then do it well.

Only experts can see the difference in the engine compartment, as the plug-in and self-charging hybrids are based on the same 2487cc engine: it does its job perfectly in both versions

The same is true for the 192-horsepower, 2.5-liter, in-line four-cylinder gasoline engine, all of which is supplemented by a 182-horsepower, 270-newton-meter front and a 54-horsepower, 121-newton-meter rear electric motor. It simply exudes the classic premium feeling that seems to be lost these days. You don’t have to change the world, it’s enough to be the best at something: a Yaris Cross E-Four hybrid, for example, is exactly the same principle, but at a completely different level. Because it is true that the theory is the same and the components are similar, only the size is different, but in terms of quality, this makes Lexus beat the budget solutions of ordinary models. The same is true for the electronically controlled, continuously variable transmission of the e-CVT, with which I can be chased out of the world – if there is not enough power and a sufficiently cultured engine behind it. The 350h, on the other hand, provides sufficient performance to ensure that the advantages of the solution far outweigh the disadvantages, so that the end result should also be suitable for those who are otherwise at war with the lack of experience of continuously variable transmissions.

The system output of 244 horsepower with the E-Four all-wheel drive accelerates the 1.8-ton body from a standstill to 100 km/h in 7.7 seconds, that’s what the 350h label means

In addition, the NX also tests other aspects of hybridity: it switches imperceptibly between the two systems, and the power output is always predictable, whether the power comes from gasoline or electricity, we get roughly the same gas reaction and start. In addition, even when working with the amount of electricity stored in a battery pack with a capacity of only 1.6 kWh, it is able to reduce the consumption to 6.5 liters, driving dynamically in the city and on the highway with the cruise control set to 130, and on the country road even around 5 liters is not a surreal idea, you can bring the factory fuel with it without compromise values ​​given in the catalog.

The steel-gray NX is also impressive from the rear, shining in the sunset light

Probably – based on the principle of premium price for a premium product – it is no surprise to anyone that buying such an NX is a pocket-friendly item, for the exact copy of the test car shown in the pictures, you have to put 27.1 million on the table, because this is the Luxury Top equipment, with both optional extras, i.e. with the metallic finish and the sliding roof. Without these, it costs 26.2 million, and if you leave almost all of its otherwise excellent quality extras behind, with fabric seats, 18-inch rims and a 9.8-inch central display, you can take it home for up to 17.32 million. Nevertheless, I am glad that I was able to test it in this form, because it really gives something different, something that seems to be taken from modern premium cars. The NX does not compensate, it does not exaggerate, and it does not blind the peasant, it only wants to be premium by being phenomenally comfortable and really knows what it can do. The question is whether more is needed these days.

It would also be perfect as a reminder for competing manufacturers: such a car, which retains the traditional premium car values ​​while riding the SUV wave, yet is spectacularly modern and at the same time powerful and economical four-wheel drive

Inner width at the back:

Headroom at the front:

Interior height at the back:

Rear legroom behind a 180 cm driver:

Seat length at the back:

Consumption by the user: