Story 2 Soldiers of Missile Troops Against 9 Thieves, Kicked on a Motorcycle and Thrown Brickwork : National Okezone 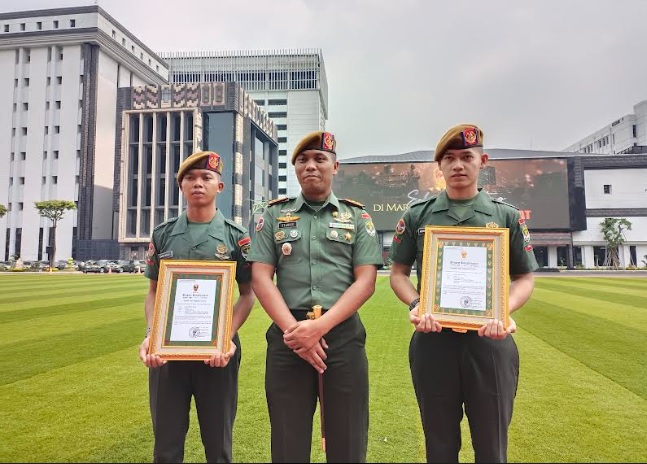 (Also read: 8 Thieves of 2 TNI Missile Troops Arrested, This is Their Fate)


The Chief of Army Staff (KSAD) General TNI Dudung Abdurachman presented them with a certificate of appreciation for their actions, at Headquarters, Central Jakarta.

After giving the award, the Army Chief of Staff asked Prada Ardian to tell the moments of the tense event. At that time, he and Junior were walking back to the headquarters after shopping for necessities at the Kebayoran Baru Market.

The two of them only realized they were being followed when they passed around the Senayan area, Central Jakarta. The gang of thugs took turns overtaking the motorbikes that Prada Junior and Prada Ardian were riding.

“At that time, we started to be intercepted, the vehicle was preceded. We already felt suspicious of them but by keeping a calm position. After that we overtook again,” said Ardian, Friday (13/5/2022).

Not long in the position of leading each other, one of the motorcycle perpetrators immediately blocked them and pushed aside to the side. Ardian said that two other motorbikes were waiting at the end of the road.

“After that, the thief said, I’m a thief, let it all out,” said Ardian, imitating the robber’s words.

Not giving up just like that, the two put up a fight. The perpetrators became increasingly violent, large bricks were thrown at the two soldiers.

“We don’t give up, we have resistance. The burglars threw us with bricks, big bricks,” he said.

Realizing that the victim was putting up a fierce fight, the burglar immediately tried to run away, step on the gas. The jacket of one of the perpetrators was held by Prada Ardian who had gotten off the motorbike.

But sadly, his grip slipped. They both realized that if the perpetrators of the robbery were not arrested, other victims would emerge from the community.


After running into the perpetrators heading to Gandaria, Prada Junior and Prada Ardian were involved in a fierce battle on a motorbike. Until finally, the perpetrator lost his balance and fell from the motorbike.

“We were kicking on the motorbike, until at the bend in the direction of the highway leading to Kebayoran Lama they started to lose their balance,” he explained.

“I got off, I grabbed the back to reduce the speed of the rider. Then, Prada Junior kicked the front to knock out the burglar,” he continued.

The perpetrator, who was in a desperate situation, tried to escape. Not staying silent, Prada Junior kicked the thugs who tried to run away and finally one of the perpetrators was successfully paralyzed.