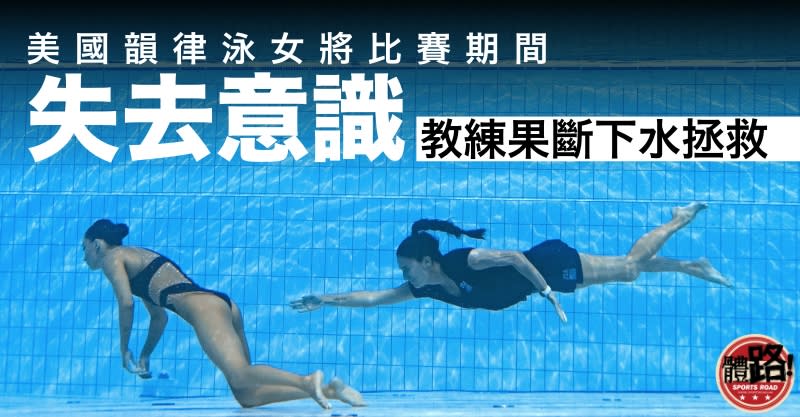 [Sports Road News]A thrilling scene took place on Wednesday at the World Swimming Championships in Budapest, Hungary! American rhythmic swimmer Anita Alvarez fell into a coma at the bottom of the pool during the single free-choice final, and her coach Andrea Fuentes jumped into the pool decisively to save her. Alvarez then woke up, and the U.S. team also issued a statement saying the athlete was okay.

The 25-year-old Alvarez lost consciousness and sank to the bottom of the pool after finishing the final. Coach Fuentes immediately noticed the difference and jumped into the pool to pull Alvarez back to the water. Alvarez was not breathing when he was pulled back to the edge of the pool, where he received first aid and was taken to the field’s medical room, where he regained consciousness. In an interview with the media, coach Fuentes said: “It was scary at the time because I saw Alvarez not breathing. But now she is doing well, when the pool water entered her lungs, and when she resumes breathing, there is no problem. I felt like that moment. It’s been an hour long.”

The U.S. team issued a statement later, citing Fuentes as saying Alvarez was in good health: “After the doctor’s examination, Anita’s heart rate, blood oxygen, blood sugar and blood pressure are all normal, and she is feeling well. Tomorrow she will rest all day. , and then decide with the doctor whether to participate in the subsequent team finals.” The statement also mentioned that the same situation will occur in other endurance sports such as marathon, cross-country and cycling. Fuentes emphasized that rhythmic swimming is the same as these events, “We forced ourselves to At the limit, sometimes the limit is reached.” Foreign media reported that Alvarez was not in a coma for the first time in the pool. The same situation happened in the Olympic qualifying competition held in Spain last year, when he was also rescued by the coach Fuentes.

Alvarez finished seventh with 87.6333 points. Earlier, she and her teammates advanced to the final with 8th place in the preliminary round of the team competition. The final was staged on Friday afternoon.